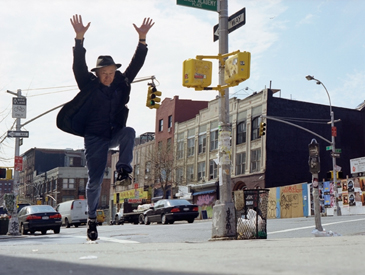 To mark his 90th birthday in late December, BFI Southbank will host a retrospective of films by Jonas Mekas, who is one of the most revered and influential filmmakers in independent cinema. To launch this season he will appear In Conversation at BFI Southbank on 6 December.

For over half a century, Mekas has been a tireless advocate of independent film in his capacities as critic, curator, promoter, sponsor and archivist, and he was the driving force behind initiatives such as the Film-Maker’s Cooperative and the Anthology Film Archives. From his unique perspective as participant or close observer, he has documented the independent film community and the wider cultures of art, music and literature throughout the late 20th century.

He has collaborated with friends such as Andy Warhol, Kenneth Anger and Maya Deren and become an inspiring figure to successive filmmakers, featuring Martin Scorsese, Mike Figgis and Jim Jarmusch. The season will be held to complement an exhibition of works by Mekas held at the Serpentine Gallery and a complete retrospective at the Centre Pompidou in Paris.

Screenings include Lost, Lost, Lost, Guns of the Trees, Paradise Not Yet Lost aka Oona’s Third Year, Birth of a Nation, plus more and in addition a 4 part Anthology screening programme.

Full lineup of films can be found on the BFI site – here.