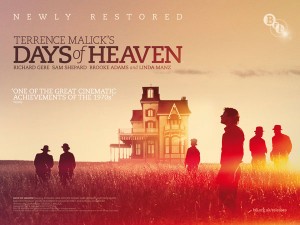 Visually one of the most mesmerising films ever made, Days of Heaven is a romantic drama set against America at the turn of the 20th century.

Similar to Badlands it follows Bill (Richard Gere) and Abby (Brooke Adams) as two young lovers crossing America after an accidental murder. After fleeing Chicago the two of them as well as Bill’s sister make a new life as labourers in Texas, where all three pose as siblings to avoid suspicion. Soon Bill comes up with a plan to marry Abby off to the dying landowner in order to get his inheritance, but not all goes to plan.

Currently when everything from mobile phones to locations are edited into a film in post production, it’s refreshing to watch Days of Heaven where the time and effort that went into filming are clearly visible. The large percentage of the footage was shot at the magic hour at dusk and dawn, where the orange light gives the beautiful natural landscape a magical aura. All of this is particularly stunning in the BFI’s restored print.

A young Richard Gere gives a great performance as Bill, shying away from the heroic characters which he usually plays. Days of Heaven was one of Sam Shepard’s first film roles and his onscreen performance as the dying landowner is very powerful and he is perfectly cast up against Gere.

Days of Heaven is a must see for anybody serious about cinema, a truly beautiful piece of filmmaking.

The newly restored print of Days of Heaven is released on the 2nd of September.