For seven consecutive years from 1959, Doris Day was one of the top four box-office attractions and for four of those years she shone at the number-one spot. Forty-four years after she quit films in 1968, she is still the top female box-office draw of all time. Yet no other major star’s often first-rate work has been so misunderstood and egregiously underrated. Often under-appreciated, Day is in fact one of Hollywood’s most consummate performers, as adept in drama as in the light comedies that made her name.

BFI Southbank celebrates Hollywood’s golden girl this December with a dazzling season of some of her finest and best-loved films, including her perky screen debut in It’s Magic, Wild West musical Calamity Jane, Hitchcock’s classic suspense film The Man Who Knew Too Much, and highly successful romantic comedy Pillow Talk, co-starring Rock Hudson.

Doris Day made her name in musicals (which most cineastes despise) and compounded the felony starring in rom-coms (which they detest). No wonder she’s been critically dismissed. Heralding a season devoted to restoring her reputation, Variety critic David Benedict casts such snobbery aside and rediscovers a gifted comedienne with rare dramatic skill. With clips from the well-loved Calamity Jane to the little-screened Midnight Lace, he shatters her ‘virginal’ image and celebrates the sheer finesse of one of Hollywood’s most underrated actors. 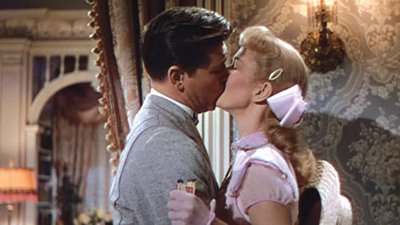 It’s Magic aka Romance on the High Seas
Young Man with a Horn
Calamity Jane
On Moonlight Bay
Young at Heart
Tea for Two
The Pajama Game
Midnight Lace
The Man Who Knew Too Much
Pillow Talk
Move Over, Darling
Love Me or Leave Me
Calamity Jane

For full listings information on all the films in the season and to buy some tickets visit the BFI website.

WIN TICKETS TO A SCREENING OF YOUR CHOICE

We have a pair of tickets to give away!
Winners can pick which film and at which time they would like to attend (Subject to availability).

In what year was Calamity Jane released?