Watch The Skies! 2001: A Space Odyssey at Jodrell Bank Report 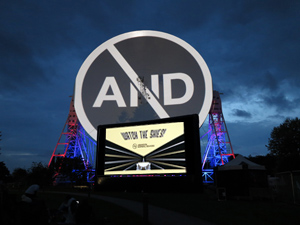 Last weekend saw a landmark event take place at Jodrell Bank Observatory in Cheshire. Watch the Skies! Hosted by Abandon Normal Devices and in partnership with the BFI’s Sci-Fi season, Days of Fear and Wonder.

It was the first ever large scale cinema based event to take place at Jodrell Bank – the home of the famous Lovell Telescope. The biggest in the world when it was first built in 1957, and still the third biggest today.

The main focus of the weekends programme were screenings of 2 classic science-fiction films, Stanley Kubrick’s 2001: A Space Odyssey and the Ridley Scott’s original Alien, each one accompanied by an exclusive World Premiere of audio-visual work from Soup Collective and Warp Records artist Oneohtrix Point Never respectively.

Arriving on-site on the Friday to watch 2001: A Space Odyssey, seeing the telescope close up was such an awe-inspiring sight. Could there be a better place to watch 2001? 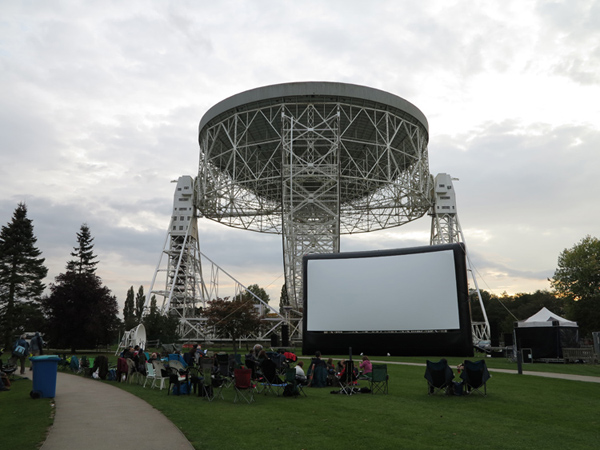 For the early part of the evening there was the Jodrell Bank Exhibition Centre and a specially curated Science Fair to explore. The permanent exhibition space was very interesting and you could even watch some classic footage of Jodrell Bank’s role in the space race, including the first ever photos sent from the surface of the moon.

The Science Fair was hosted by scientists from the University of Manchester, each of them giving some demonstrations about the work they do at the Observatory. RoboGals gave you the opportunity to have a go at programming robots yourself and find out more about their practical uses in both science and engineering. The Computer Science division were demonstrating the Oculus Rift VR headset, whilst others were showing off a small infra-red camera, similar to the huge ones used to look into deep space. There were a collection of carnivorous plants being shown off by the team from the Faculty of Life Sciences and even some samples of actual moon rocks, fragments of meteors and even a little piece of Mars!

Back outside, and once the sun had set, the Lovell telescope was rotated into position for the evening, creating the best backdrop to any film screening you are ever likely to see.

People began to take up their plots in front of the screen and the introductions began – Tim O’Brien, the Associate Director of Jodrell Bank was first up. He gave a brief history of the Observatory, Sir Bernard Lovell and details of the current work that is carried out there which includes research into pulsars and space exploration. 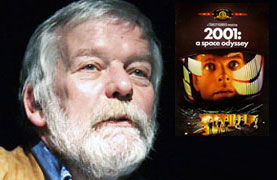 Following on from him was a very special introduction to the screening from Anthony Frewin, close friend and personal assistant to Stanley Kubrick for over twenty years and representative of the Kubrick Estate.

He gave a fascinating overview of how Science Fiction in general was viewed en masse back when the film was made. In short, it was not taken seriously at all, even in the mainstream.

“No reputable publisher would publish any science fiction, except for one, Victor Gollancz. Science Fiction was for spotty, nerdy teens – that’s how the general public perceived it anyway. The thoughts and questions that Science Fiction proposed were for mad scientists, adolescents and people who hadn’t got anything better to do.” 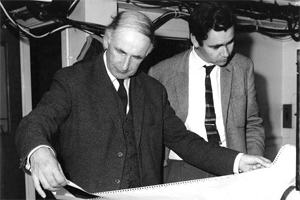 He then went on to describe how Kubrick, in the prep work for 2001 had drawn up a list of 23 prominent astronomers, cosmologists and scientists and sent one of his colleagues, Roger Caras to interview them regarding their thoughts on extra-terrestrial intelligence. The list included many famous names including American astronomer Harlow Shapley, Sir Bernard Lovell, Freeman Dyson, writer Issac Asimov and anthropologist Margaret Mead.

Initially, Frewin explained, the plan was to use some of the content of these interviews as a prologue to 2001. As production went on, the film itself was getting longer and longer and Kubrick ultimately decided that the film had to stand on its own two feet without it.

In 2002, there was talk of a re-issue of the film on DVD with the addition of some of these discussions and interviews as part of the extra features. Sadly, the film could not be found and so it never happened.

“I looked everywhere and it had just disappeared off the face of the Earth. It was rather strange, Stanley never threw anything away. After he died, we found bus tickets from New York in 1945 and cheque stubs going back to the 30’s. All i can assume is that it has been mislabeled and is sitting in some film vault somewhere. I only hope whoever discovers it realises the importance of it.”

Luckily he did find some transcripts of the tapes, edited them and they were published in 2005. He also added that he had printed out some of the interview transcripts from Bernard Lovell specially for the event and offered to give them out to any interested parties at the end of the screening. You can read some extracts from it here. A very nice and personal touch to those that had braved the high winds to watch this cinematic masterpiece in such a majestic setting.

A new, short audio-visual screening followed, Jodrell Bank Calling, made by the Soup Collective which was projected directly onto the Lovell Telescope. The film itself was a combination of spoken word, rarely seen archive footage of the construction of the telescope, clips from 2001 and animation. A reinvention of the original interview with Bernard Lovell being the main focus. A wonderfully fitting introduction to the main event. Read more about the Soup Collective here.

Ignoring the brilliant content that the Soup Collective had created – just seeing any projection onto the 250ft diameter of the telescope was an awesome sight in itself. The technical team had a huge scaffold gantry to project from. The main projector for the screen was a 20,000 lumen model, whilst the mammoth task of filling the telescope surface took 4 x 40,000 lumens. Incredible when you think that the average office projector is around 2,000.

And so to the main event – the screening of the landmark film, 2001: A Space Odyssey. Based on the short story The Sentinel by Arthur C. Clarke, the film has very deep undertones and raises many questions about humanity, evolution and our place within the universe. Including thoughts on extra-terrestrial intelligence, artificial intelligence and their evolution, and in particular in this case – HAL.

During the screening it was an absolute delight to see the Lovell Telescope turned into a giant version of HAL. All part of a very well conceived event. 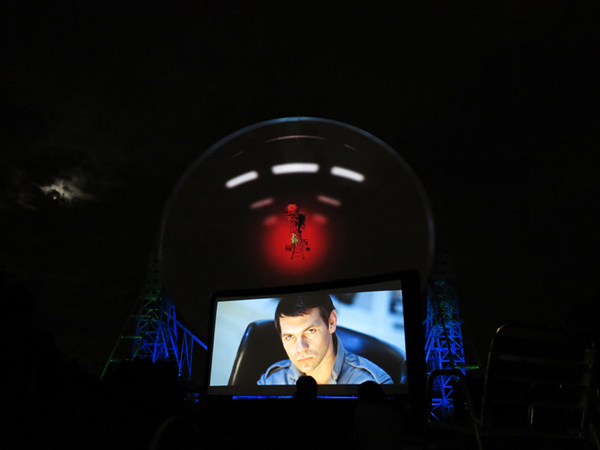 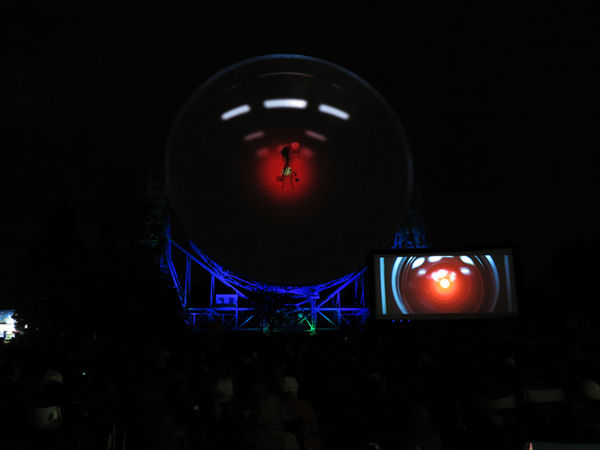 As each year goes by, the film gains more and more respect. It is already regarded by many as the best Science Fiction film ever made.

It earned the only Oscar win of any of Kubrick’s films, Best Effects, for the groundbreaking visual effects created by Douglas Trumball – another factor in making the film so iconic all these years later. Not entirely deserved according to Mr Trumball in this recent interview.

Everyone involved in the production of the event deserves the highest of praise. It was superbly executed. The unique setting of Jodrell Bank with it’s place in history and its links to deep space did not nothing but amplify the epic and profound nature of the film. 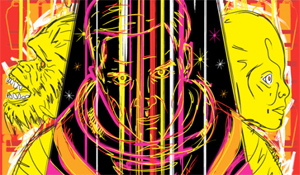 There was just enough time to stop and buy a limited edition poster on the way out, created by a local artist.

To answer the earlier question of ‘Could there a better place to watch 2001?’ – the answer has to be a resounding NO. (Unless it’s at the Royal Festival Hall with Live Orchestra – but that is a different story).