Halloween has long been my favourite time of the year. A lifetime fan of the horror genre, I’ve always enjoyed things going bump in the night. Lately though, I’ve found myself a little disillusioned with the day itself, always searching for something different or new to do that will make my skin crawl and raise the hairs on my back. When it was at its best, Frizzi 2 Fulci at the Barbican centre provided this. 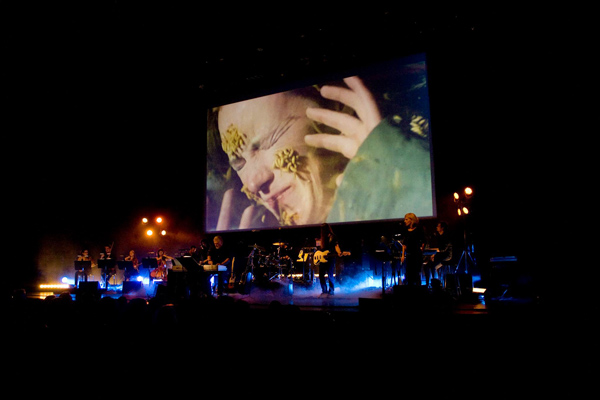 Frizzi 2 Fulci featured famed Italian composer Fabio Frizzi, the F2F orchestra and the Alauda string quartet in an evening celebrating the composer’s work with the late great Godfather of Gore Lucio Fulci. Playing some of his finest scores along side an assortment of some of the most disturbing, violent and brilliant clips from Lucio Fulci’s filmography which includes The Beyond, City of the living dead and perhaps most famously; Zombie Flesh Eaters. When the clips rolled the evening was a complete success, filling the giant space that is the Barbican and stunning the drunk and dressed up crowd into a silence. As the band played along side images of eyes being gouged on broken door frames or zombies tearing flesh from the skin, the evening felt frightening, filled with dread but somehow a little profound. At one point I found myself almost welling up as I watched the famous zombie vs shark clip from Zombie Flesh Eaters (definitely eliciting the biggest reaction from the crowd) as Frizzi composed his group. I couldn’t explain it at the time.

When the clips didn’t play, which unfortunately was probably more then half the evening, the performance felt noticeably flatter. The audience got more vocal, and a reality sunk in that without the imagery, some of the music felt frankly incomplete. I think this was partly due to the choices of music that played at this time. For a Halloween performance that plays up to a horror fan base, some of the music that was included felt completely out of place. In particular the two songs in the middle of the act where Fabio Frizzi himself sang what felt like songs from an original disney movie. One has to assume that the only reason more of the music choices weren’t accompanied by film clips fell down to licensing issues, which is a shame, but the evening needed more then slightly out of sync live stream. 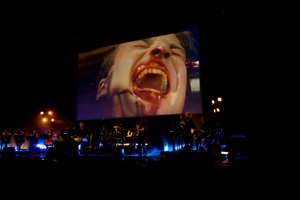 The band were all excellent and particularly the Alauda string quarter did a fantastic job, when the clips weren’t rolling my eyes were purely fixated on them. Their timing and their chemistry must be commended as it really jumped out on stage. Apart from one humorous mistake by the band’s drummer Frederico in which he played one song too early and then proceeded to play over Fabio as he tried to explain the drummer’s mistake, the performance went ahead with out a hitch. I wasn’t a fan of Fabio’s vocalist who’s name I forget, who at times, felt over the top and over shadowing yet under talented.

Overall Frizzi 2 Fulci was an enjoyable and memorable way to spend Halloween. When Fulci’s magnificently gruesome clips rolled, the evening was at its best and its just a shame that there couldn’t have been more.