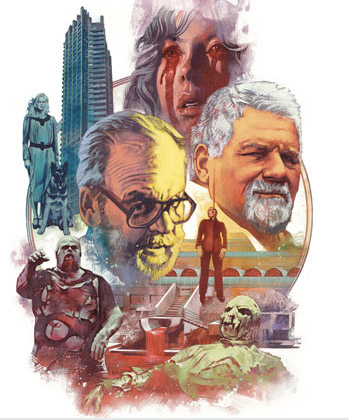 Immerse yourself in the chilling atmospheres of Fabio Frizzi’s brilliantly disturbing scores, accompanied by film scenes which will have you hiding under your seat.

Following the success of his sold-out Union Chapel performance in 2013, soundtrack maestro Fabio Frizzi returns to London on 31 October 2014 with the F2F Orchestra, the Alauda String Quartet and vocalists for this live film and music event in the Barbican Hall. The evening features Frizzi’s scores for the late Italian film director, Lucio Fulci who is known for directing some of the most controversial horror classics of the 70s and early 80s, including Seven Notes in Black, Zombie Flesh Eaters, City Of The Living Dead, The Beyond and more. Scenes from these films will accompany the live music performed by Frizzi and his band. The performance is part of a series of concerts at the Barbican which explore the innovative ways in which film and music can interact.

Fabio Frizzi’s progressive, dark and brooding soundtracks to Fulci’s films went on to inspire generations of musicians and film directors – from Boards of Canada and Wu Tang’s RZA to Quentin Tarantino, who deployed the theme music from Seven Notes in Black in Kill Bill Vol 1. Frizzi’s work forms part of a tradition of soundtrack composition in Italy, a heritage which includes such names as Ennio Morricone, Bruno Nicolai, Berto Pisano, Gianni Ferrio and Stelvio Cipriani.

Produced by the Barbican in association with Paint It Black, as part of the Illuminations series.

We have a pair of tickets to give away. Please only enter if you can attend the screening!!

Where was Fabio Frizzi born?

a) Bognor
b) Bologna
c) Bournemouth