The Way He Looks Review 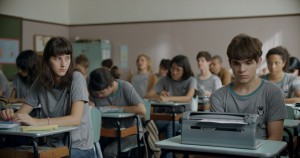 Coming-of-age tale, The Way He Looks, arrives in the UK on general release with some confidence. Having toured the European festival circuit to great success, it has now been submitted as Brazil’s official entry into the foreign language category for the 2015 Oscars. With that knowledge in mind, one comes to it expecting great things. What a lovely sensation it is to be able to impart that it most certainly delivers.

The film is the culmination of Brazilian writer/director Daniel Ribeiro’s endeavours and represents his first foray into feature-length film, having previously cut his teeth on a number of shorts, along with eight episodes on the 2009 television series Tudo O Que E Solido Pode Derreter.

Leonardo (Gilherme Lobo) is a blind teenage boy. His best friend is the kind-hearted Giovana (Tess Amorim). Together, they fret about first kisses and playground politics, whilst Leo in particular spends the remainder of his time dreaming of foreign climes and participation in a foreign exchange programme. His obstacle is his blindness, but his will is great. The cosy relationship between Leo and Giovana is rocked with the arrival of new boy, Gabriel (Fabio Audi). As a friendship (and possibly more) blossoms between Leo and Gabriel, Giovana is left unsure of her place, bringing her a bitter actualisation of the aphorism ‘twos a company, three’s a crowd’.

Ribeiro offers a commendable sensitivity to a story that could easily be side-tracked by the plight of disability. It is a potential rabbit hole from which he pulls 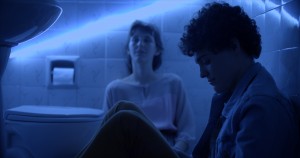 clear. He touches base with it, but never lets it overtake the wider tale being told; the search for identity, independence and sexuality. His work even reflects sympathetically at the broader perimeters of the story, such as Leo’s parents’ battle with the struggles of teenage expression compounded by the additional worry/anxiety of a visually impaired son.

The script contains plentiful mentions of planetary activity, and it forms an apposite metaphor for the shifting universe of Leo. Additionally, visually, the utilisation of aerial mid-distance shots with characters in the centre of the frame splayed horizontally, is a pleasant recurring theme.

The work, as a whole, captures the early throes of sensuality and first thrushes of kissing, much a like a Brazilian take on P’Tang Yang Kipperbang (1982), but with added success. There is a fulfilling conclusion to each facet of the story, and it ensures that this film resides in the memory and tugs at the heartstrings in the most uplifting manner. In fact, such is the fine meter of balance, that it is hard to believe that this is Ribeiro’s debut feature film. An astounding success worthy of every accolade.