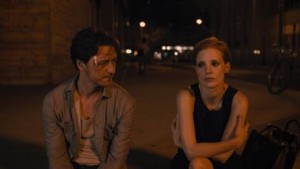 The 58th BFI London Film Festival in partnership with American Express® is pleased to confirm THE DISAPPEARANCE OF ELEANOR RIGBY will be presented as a new addition to the official LOVE section at this year’s Festival. James McAvoy, who is on the Official Competition jury, will be joined by writer/director Ned Benson at the UK Premiere at the Odeon West End on Friday 17 October.

With his unique vision, writer/director Ned Benson ambitiously captures a complete picture of a relationship in the beautifully relatable portrait of love, empathy and truth that is THE DISAPPEARANCE OF ELEANOR RIGBY. Once happily married, Conor (James McAvoy) and Eleanor (Jessica Chastain), suddenly find themselves as strangers longing to understand each other in the wake of tragedy. The film opens a window into the subjectivity of relationships by exploring both sides of one couple’s story as they try to reclaim the life and love they once knew. Created as part of a three-feature project, THE DISAPPEARANCE OF ELEANOR RIGBY: HIM and HER each tell the story from Conor and Eleanor’s perspectives respectively, while this third version combines their narratives.