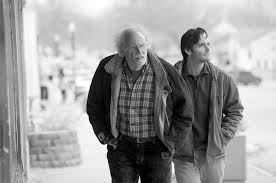 Intersecting the line between comedy and drama as one of the few uplifting films at the Cannes Film Festival this year, Nebraska delivers a beautifully written and paced film that proves to be director Alexander Payne’s most personal and moving work yet. Payne has previously proven his immense talent for intimate dramedies with Sideways and more recently, The Descendents. This time, however, the filmmaker tackles a project much closer to home, using his personal knowledge of the people and towns of his own native Midwestern state.

Nebraska follows the antics of David (Will Forte) and his elderly father Woody (Bruce Dern) as they travel from Montana to Lincoln, Nebraska to claim a seemingly bogus sweepstake prize Woody received in the mail. Exasperated with his father’s near dementia but determined to please him, David takes his father back to his hometown in Nebraska on their way to Lincoln, where they confront the unusual townspeople and face the unresolved issues inherent in their own father-son relationship. Woody’s wife Kate (June Squibb) and other son Ross (Bob Odenkirk) join the family in Nebraska for a last-minute reunion. They are all confronted with uncomfortable truths once the townspeople hear of Woody’s supposed fortune and begin to recall mysterious outstanding debts he had not yet settled. Faced with his father’s life-long drinking problem and marital issues he previously had no inkling of, David tries to piece together a semblance of familial togetherness.

Filmed in gorgeous black-and-white (and notoriously difficult to fund as a result), Nebraska embodies elements of Napoleon Dynamite and The Last Picture 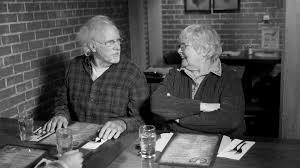 Show within a film that instills humor into the ordinary and the everyday. Both a love letter and a hate-filled note to the American Midwest, the film’s characters and dialogue encapsulate the hilarity and sadness of places where there is little to do and talk about; places that we all recognize too well. Payne captures this effortlessly, aided by the choice of black and white which serves to render the dreariness of life out there even as it embeds the mundane landscape with a timeless beauty. Initially jarring, after five minutes it becomes clear that the film could not have been shot any other way. Nebraska refreshingly proves that black and white is neither a thing of the past nor something solely reserved for European art house films, as the unassuming characters seem perfectly at ease in the duotone frame.

The performances are all top-notch, from Dern’s riveting portrayal of the complexity of old age to June Squibb’s heart-warming, hilarious, and even shocking performance as his wife. Dern conveys a beautiful sense of naïveté through his character, as if to remind us of the potential humanity once had for sincerity and kindness. Squibb alternates between heartfelt benevolence and a tough-as-nails attitude as funny as it is harsh. Will Forte and Bob Odenkirk are the cherries on top of this oddball family sundae; the chemistry shared between them and with the other protagonists ensure that this is one of the finest comedic ensemble casts assembled in years. Forte carries the film as the most accessible character; his exasperation with his family is by turns hilarious and distressing. Far from his exaggerated Saturday Night Live sketches, Forte firmly establishes his credentials as a dramatic actor capable of believably oscillating between clowning and seriousness. The deadpan humor is delivered pitch-perfect by every member of the cast, creating those uncomfortable silences so characteristic of cringe comedy. The incredible difference, though, is that these actions and lines of dialogue seem real and the humor natural, rather than overly stylized in the manner of indie films like Napolean Dynamite or Garden State. Perhaps this is what makes Nebraska so funny; its tonal fluctuations are firmly grounded in a world whose sheer ridiculousness stems from its authenticity. 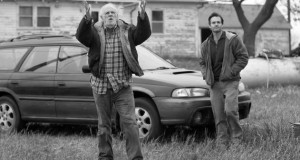 Payne has taken a simple, practically unremarkable story and transformed it into a profound examination of what it means to be a part of something as ordinary and as dysfunctional as a basic nuclear family. Flawlessly timed humor both quells and corroborates the drama, once again proving the director’s mastery in blending genres. As with Sideways, Payne manages to take a very specific, localized narrative and make it accessible to a large audience and representative of universal concerns. Nebraska is one film that can easily slip under the radar and unfortunately is likely to do so due to its subject matter and artistic ambitions, but this is one gem you won’t want to miss, if only for its uproarious yet heartbreaking honesty.