Isle of Dogs kicks things off, lacklustre dramas and pointed thrillers: a round-up of the opening days of Berlinale 2018

Chilly February can be relied upon to provide bright cinematic sunshine in the form of the Berlinale – the menagerie of shorts and features that continues to establish itself as the premier A-list European festival (well, certainly before the month of May, anyway). With acres of internet buzz, chattering and clattering keyboard taps, the don of left-field, arch American cinema, Wes Anderson, launched his hotly anticipated Isle of Dogs onto the suspecting public.

Etched with trademark aesthetic flair, Isle of Dogs (3/5) is of restless, jittery composition. Narratively-speaking, matters centre on a fictional motion by Japan to cast dogs away to their own island due to the onset of ‘canine flu’. From there, the plot ambles along insouciantly with ham-fisted metaphors on discrimination and segregation. The feeling can’t help but persist that we’ve seen this one too many times before. The tone is rabidly caustic and knowing in true Anderson fashion; often feeling altogether a little too pleased with itself. A common failing of Anderson’s oeuvre is disconnection through a lack of empathy between the protagonists and the audience, no matter how dazzling the presentation. This rears its head again here also.

That said; there is undeniably an expert craft at work in the visual representation, and significant credit in this regard is owed over the stop-motion animation. Inside a troubled diegetic, there is a wonderful referral to sophisticated democracy in the dogs’ attitudes that casts every decision to a vote – something that the dogmatic humans do not subscribe to.

Nifty and interesting touches appear in the more humorous exchanges between the five central (dog) characters, which boasts heavy-hitters such as Bill Murray, Bryan Cranston, Ed Norton and Greta Gerwig. In fact, there are more bigwig members of the acting community present here than a post-Oscars party. Frequently impressive, but hard to sustain interest, Isle of Dogs is one to coolly admire. 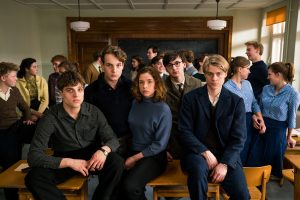 Of less international fanfare, but of far better execution, is the affecting The Silent Revolution (4/5); a film charting a group of sixth-grade pupils in East Germany in 1956 who stood in solidarity with the Hungarian uprising by undertaking a minute’s silence in their own classroom. It was an act met with more than mere raised eyebrows. An investigation was taken in an attempt to find the ringleaders – effectively perceived as insurrectionists-in-waiting – at its centre, something that descended into a witch hunt. Certainly, during this period in the GDR’s existence, paranoia was the order of the day. Shot with an assured, unfussy hand by Lars Kraume, this true story is knitted with an effective forward momentum that evokes Clint Eastwood’s consummate, yet workmanlike, directorial imprint.

A darling of the world cinema scene, it’s safe to say that a European festival would feel incomplete were it not to feature at least one Isabelle Huppert-starring vehicle. This time around, she is woefully miscast in Benoit Jacquot’s unlovable, misanthropic and alienating Eva (2/5): a work so desperately unappealing that only a masochist would volunteer a second viewing; it’s certainly deserving of nothing grander than a hugely muted and miffed response at most. 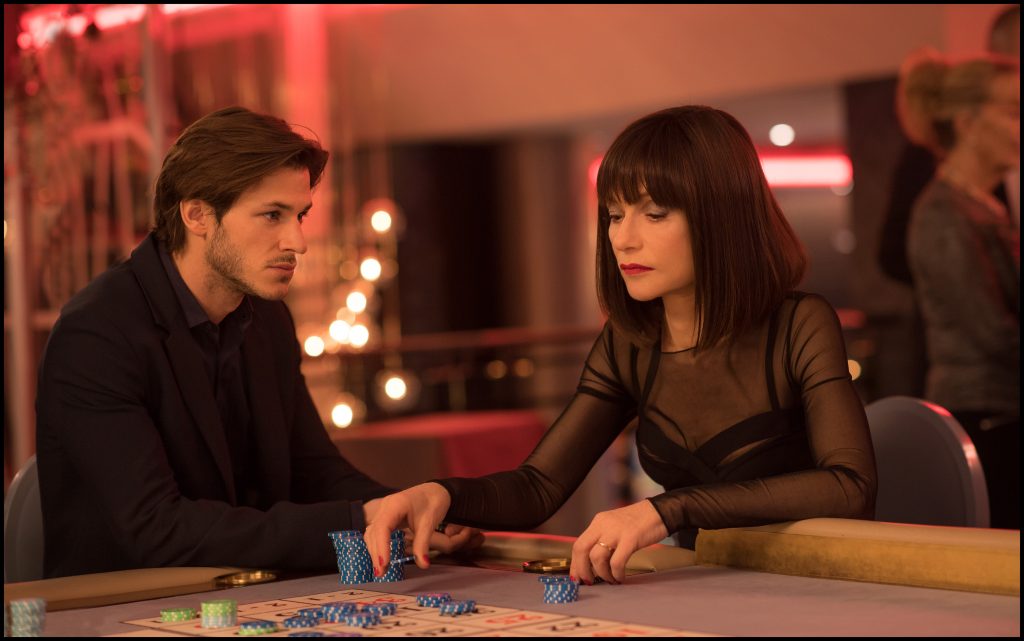 There is miff that Huppert would even want to take on the role of the titular, enigmatic high-class prostitute in a resultant work devoid of any emotional authenticity. Each and every one of these characters are unlikeable and unrealistic; particularly male lead Bertrand Valade (played by Garpard Valade). There is no moral fibre to Eva. This would be fine if it didn’t feel as though the whole thing rattles along like a whistling broken central heating pipe: noisy, irritating and ineffective.

Robert Pattinson and Mia Wasikowska have teamed up with the Zellner brothers (David and Nathan (Kumiko, the Treasure Hunter)) for a madcap blast of the surreal in the western caper Damsel (3/5). Focusing on the plight of lovesick Samuel (Pattinson), out to rescue his beloved from the grips of an abductor over yonder in the great mountains, there is little heart but a fare smattering of mirth in a work that elicits more than a passing resemblance to a Coen brothers production.

Pattinson continues to plough his own offbeat furrow and is the star attraction here; delivering acting smarts that suit the tonality of the Zellners’ zinging script. Shades of Alejandro Jodorowsky slip in with the peculiar village folk in the early passages and the mood of the piece is keen to quirk and smirk in the place of pathos. It is fine as a piece to observe. A diverting piece in line for the big prize at the Berlinale.

Nestling in the outer regions of the programme, Profile (4/5), bangs the drum for British audiences in a far more effective way than the mainstream, The Bookshop (2/5). The former is the imaginatively-told construct from Ben-Hur (2016) director Timur Bekmambetov, who uses the novel device of depicting the entirety of the action solely on a computer screen. 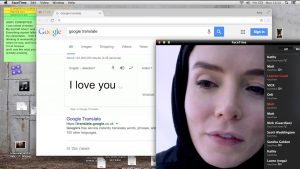 Profile follows the enquiries of undercover British journalist Amy Whitaker (Valene Kane) looking to comprehend the recruitment process of ISIS for an expose article. With chilling realism – through an initial encounter via Facebook – this true story is never constrained by the self-imposed restrictive nature of its format. There is a sense of purpose and speed here that thrills in all manner of ways. With a strong, topical story to tell and a small, but impressive, cast this is a film demanding of conversation and, more importantly, to be seen by a wide audience.

It is just a pity that the exemplary Profile casts the well-meaning, but thoroughly limp and insipid The Bookshop further into the shadows. Emily Mortimer opens a bookshop in a small seaside town. This move creates political ripples in a parochial mini-society filled with bureaucracy and the desire for things to be done a certain way. Mortimer is amiable and Bill Nighy ignites a much-needed dose of charisma in an otherwise dull landscape. 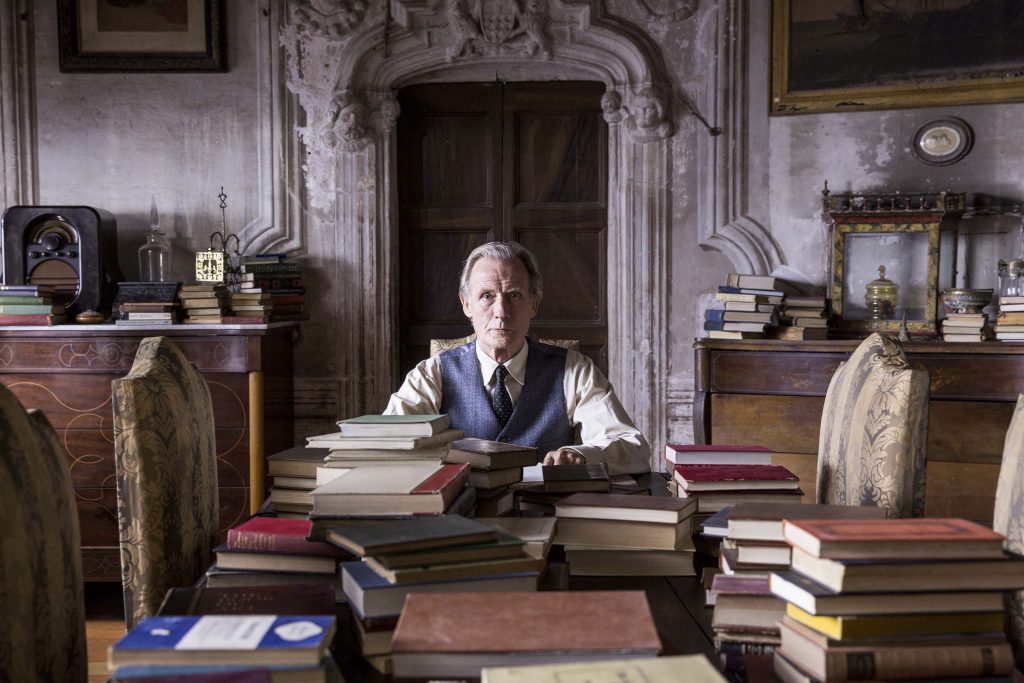 And yet, it is abundantly clear that they are wrestling with a script devoid of any discernible raison d’etre. Little happens and the shrug that greets the credits is one of mystifying proportions. Why was this film made? What appealed to Patricia Clarkson, Nighy et al? Answers on a postcard…