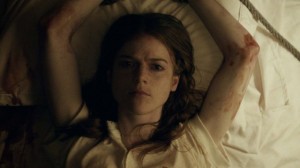 If, in the giant cauldron of filmmaking, Rosemary’s Baby, Antichrist, Alien and In Fear were thrown in, you would probably get a feel for what Leigh Janiak’s Honeymoon is. Homage or parody, Honeymoon is some of the most fun you can have watching a horror film. With a creepy atmosphere (mostly provided by empty forests) and led by two very talented actors with brilliant chemistry, Janiak’s film is likely to be remembered and most probably bring a cheeky smile to its audience.

Starring Rose Leslie (Game of Thrones) and Harry Treadaway (Penny Dreadful) as a newly married couple who decide to leave behind the busy city for the quietness and serenity of the woods. Their wedding, whilst makeshift and speedy, was exactly what they wanted and the opening video of the couple talking to camera portrays them as a couple totally and completely in love. Straight away, the audience are brought into their relationship and are asked to care about them. One can’t help but enjoy the affinity of them and look forward to what awaits them in the darkness.

They leave for an old, deserted cabin, which Bea’s (Leslie) family used when she was younger. She remembers the house and 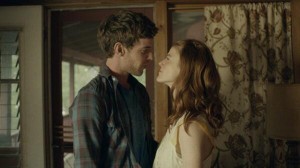 what happened in each of the rooms and she hopes that she can rekindle some of the magic from her childhood with her new and loving husband. Paul (Treadaway) is thrilled by it all; no one else around except for his wife – they can have all the sex they want and won’t disturb anyone. But all is not as it seems, as the couple bump into another, Will (Ben Huber) and Annie (Hanna Brown), who seem to be hiding something deadly. It is revealed that Will and Bea may have had something when they were younger, but they have both come so far since then that they do not need to rehash the past. Annie warms the newlyweds to leave whilst they can and save themselves.

One night, everything changes and Paul comes into the bedroom late to find Bea not in bed. He searches the house but can’t find her and ends up finding her naked and unresponsive outside – what happened? He brings her inside and she has no idea. Over the coming days, the relationship seems to strain – Bea seems to be hiding something and pulls away from Paul. They stop having sex, despite Paul’s trying and he slowly becomes more and more paranoid about their whole relationship. 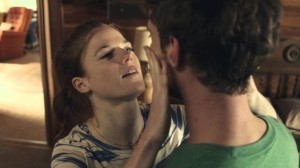 This back and forth continues deeper and deeper into the mystery, until the thrilling reveal, which feels both masterful and retro at the same time – reminiscent of classic horror.

The cleverness of Honeymoon is the relationship between bodies, sexuality and what is going on inside. As with some of the best horror films, it is deceptively sexy. Honeymoon manages to get under the skin of the audience and whilst it is the sullen creepiness of it all, there is no getting away from the fact both leads are very good looking and have great erotic chemistry on screen. As the revelation comes together towards the end, the meaning of bodies and how they can be used and changed is fully explored and it leaves itself engrained on the memories of the audience.

Steller performances, with a simple and subtle structure, Honeymoon is a memorable and exciting film, likely to creep you out right when it needs to.