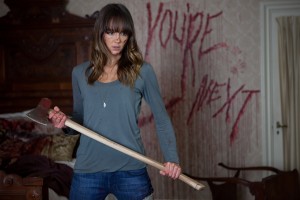 Although rarely given the respect it deserves, the horror genre is constantly let down by Hollywood’s frequent churning out of sequels, remakes, an uninspired copycat films. Despite its standard opening and set-up, You’re Next tries to make up for some of the genre’s missteps by affectionately paying tribute to some of the classics, whilst also proving that horror still has a place in contemporary cinema. This is achieved through director Adam Wingard’s self-aware manipulation of what is expected and his use of modern audio-visual techniques. The hand-held effect of many sequences rejects the glossy Hollywood aesthetic but still looks absolutely stunning, especially in high definition. This, combined with the confidence he shows by focusing on his actors’ faces and the use of make-up effects rather than CGI gore, is something that many horror fans will relish. I was unfortunately unable to make it to FrightFest this year, but it seems that this film was a particular success amongst the horror-literate audience.

Wingard makes use of a relatively unknown but talented cast. He also adds in a couple of faces horror fans might recognise (notably Barbara Crampton from Re-Animator and horror director and star Larry Fessenden). The kills, gore, and surprises never fall flat and the unexpected elements carry the film above many others from the genre. It is still a pure slasher film and doesn’t stray away from some of the standard tropes, particularly the use of false jumps. The self-awareness of You’re Next allows for these expected elements and they become comedic rather than irritating. The film’s greatness is very much limited within the boundaries of its genre and it is by no means a profound piece of cinema, just a very well-executed and consistently entertaining slasher film.

One particular element raising You’re Next above many other films of its kind is its feminist subtext. Australian actress Sharni Vinson plays Erin, the film’s intelligent home-defender who gains sympathy through strength rather than screams. Her plight becomes less about running away or finding the best hiding place and more about fighting back. I found this to be a particularly refreshing and consistently interesting take on the familiar home invasion story.

You’re Next is rewatchable and has the potential to become a cult classic in the same way as The Cabin in the Woods does. It takes itself seriously but is also very funny for those familiar with its references (look out in particular for nods to The Texas Chainsaw Massacre, Black Christmas, and Night of the Living Dead). This is a straight-to-the-point feminist slasher film that lives up to its FrightFest hype.

There are also two commentaries available on the Bluray as well as a short but informative making of documentary. This title will be available on DVD and Bluray from the 13th January.