The BFI’s Made in Britain strand, launched last year continues this April with a 10th Anniversary celebration of Warp Films.

Warp Films have been at the heart of a new wave of filmmaking in the UK and have provided a platform for fresh, radical ideas and emerging talent from film and TV. When Warp Records launched in Sheffield, in 1989, the label’s output made an immediate impact on British culture with its innovative artists and diverse electronic music. The label balanced commercial success with a fierce commitment to innovation and independence. In 2001, founding partners Rob Mitchell and Steve Beckett, enlisting the help of producer Mark Herbert, founded Warp Films with the same pioneering principles. Famously working from a converted shed in his garden, Herbert produced the BAFTA award-winning short My Wrongs #8245-8249 & 117, starring Paddy Considine and directed by Chris Morris. 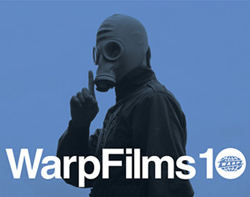 Presented in association with the Southbank Centre. Tickets £18.50 available on 0844 847 9910 or southbankcentre.co.uk

Kicking things off in style is a special Sonic Cinema presentation of a live re-score and screening of Dead Man’s Shoes. It will be the London premiere of the large-scale, live music performance of the very first Warp classic. Previously performed at the Warp 10th Birthday party at Magna Science Centre in their home town of Sheffield. You can read our report from that event here.

This is a very special show. If you get the chance to see it, take it.

Screenings throughout the season include:

For the full line up and timetable check the BFI site.

In addition, there are also some other great one-ff events. Including:

The ever popular BUG events from Adam Buxton and his team have a special show lined up that joins the dots between seminal independent label Warp Records and Warp Films. With Warp DJs in the benugo bar for an after-party, it’s a night not to be missed.

In this exciting Masterclass you’ll hear from Head of Production Barry Ryan about how Warp Films began and the process they go through to produce their award-winning films.

WIN TICKETS TO A SCREENING OF YOUR CHOICE

We have 3 great prizes up for grabs!

Winners can pick which film and at which time they would like to attend (Subject to availability).

THIS COMPETITION IS NOW CLOSED. WINNERS WILL BE NOTIFIED BY EMAIL