Celine Sciamma’s first film, Water Lilies, was a lyrical and beautifully executed début about the sometimes painful process of a first (in this case lesbian) crush. Her second film, Tomboy, looks at younger characters; 10 year old Laure, who, after her family moves, begins introducing herself to the other children living near her as a boy named Michael. It’s another sensitive and beautifully acted film, and establishes Sciamma one of the most interesting young (she’s just 30) voices in French cinema.

I was lucky enough to sit down with Sciamma on a visit to London and chat with her briefly about her new film.

My questions are in bold, Sciamma’s replies are in normal type. 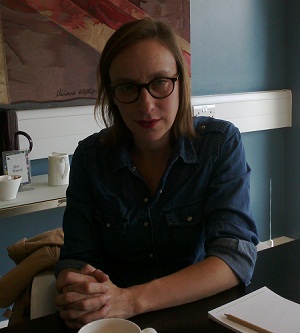 Sam: To begin at the beginning; your degree is in literature, and you trained as a writer rather than as a filmmaker. So how and when did you decide to become a filmmaker, to move into that side of art?

Celine Sciamma: Well, I don’t remember making a decision. I really wanted to be a screenwriter, I wrote my first script when I was in school, which was the script for Water Lilies, which became my first film. In France there is this strange… all the directors write their own movies, unlike here or in the US, there is no market for screenplays, so once you have one that you wrote yourself that really entices you to direct yourself. So that’s what happened. I was not sure, but I decided, I will say yes anyway, because the movie is not going to be made anyway because it won’t find money. And then everything got really fast, because we got the money, so I got to direct the movie but I don’t remember taking the decision, because I was so scared.

Sam: Just something that happened because of the way the industry works in France then?

CS: Yeah, and it was really lucky that it happened because I discovered how much I loved it, but I was really really scared of doing it.

Sam: Obviously you’re a young female filmmaker, and both of your first two films are to a certain degree about young women coming of age. How much personal experience do you find leaking in to your cinema, and is it important to you that that happens?

CS: I think, especially when you do work about childhood, you go to your memories, the teenage years even more so, even more vivid because it’s closer. But I think you have to talk a little bit about what you know, about what is true, so that you can bring fiction [to it]. If I’m talking about a fifty year old man, I don’t know anything about that, so I think It’s not going to be great storytelling, whereas, talking about childhood and teenagehood, as a rookie, as a coming of age director, I feel like I can go further from my life. It’s not really autobiographical, I remember how it felt, so I have the feeling and then I can build characters that are very far away from me. But of course, especially in Tomboy, there are things that are memories from my own childhood, like the relationship between the two sisters, that’s really something that is mine.

Sam: The other thing that is really central in Tomboy is the issue of gender, and I think it’s going to provoke a lot of debate with audiences; is she transsexual, its it just a phase? Is that something that you decided for yourself, and did you discuss that with Zoe, who plays Laure?

CS:Well, I have my own opinion of course about who she’s going to become, even if it’s not in the movie, the movies contains all the hypotheses – willingly – that way everybody can connect. We talked, me and Zoe, about how she felt about the character, about who she was going to become, we talked about her opinion, because that’s the one that really…

Sam: She’s quite young to have a defined take on that.

Sam: Does that come from the fact that she’s actually quite a girly girl?

CS: She’s not that girly, no. She was kind of boyish actually. She doesn’t have the short hair, she had that for the movie but now it’s grown back, but she’s the kind of girl who plays with the boys and she’s very childish, very into childhood, not interested in boys or girls, she just plays soccer everyday, basketball, she’s really an outdoor little girl. She’s kind of boyish, and that’s why I think she connects, and why she thinks it’s just a phase, because for herself she thinks it’s just a phase. 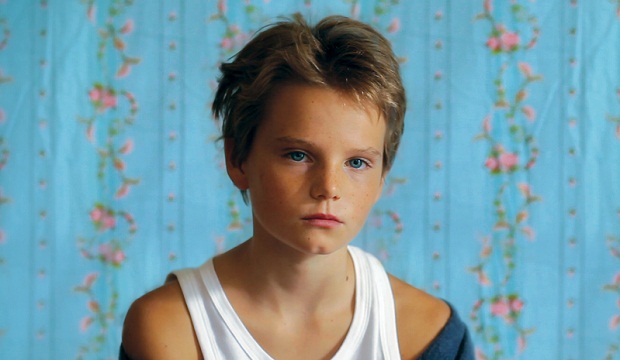 Sam: Talking of playing with the boys, you cast some of Zoe’s real life friends as her friends in the movie. One of the things that fascinated me about both Water Lilies and Tomboy is that you have very naturalistic performances from very young and generally quite inexperienced actors. How do you work with them as a director, do you stick close to the script?

CS: Well it depends. When there are a lot of children on the set and we have those group scenes it’s really about directing them in the moment. So I’m picking child after child and it’s not totally improv, I’m telling him ‘I’m shooting you’ so they always know when the camera is on them and when they have to perform or they don’t. So I just let them play football and sometimes I say ‘now you’re gonna spit’ or ‘now you’re gonna look at her’ So it’s live, live directing, because they didn’t read the scene before.

But when I’m with Zoe, or the little sister, it’s all written down and they have to say the right words. Of course we bring a little improv, and we do very long takes – ten to twelve minute takes. They always have things to do; playing with play-doh, playing in the bath, to get this natural feeling, and then we try to get the words that have been written.

Sam: Talking of how you shot the film, you made quite an interesting choice with the camera you used for this film, which is a stills camera.

Sam: So, how did that influence the design of the film, and were there particular challenges or advantages to the choice of that camera?

CS: I chose it mostly for artistic reasons, it’s a cheap camera and everybody is shooting with it now because it’s cheap, it’s a good camera, but it’s cheap. What I really like about it is that it resembles 35mm, regarding the field of depth, regarding the colour, and so you can really get the characters and the blurry backgrounds that you get from 35mm. So to me it was an HD camera that had a very strong cinematographic feeling. It’s also lighter, and the camera needed to be lighter because when you are shooting at a child’s scale, like that [indicates camera height], you have to be lighter, so that was also part of the decision.

More philosophically I like the idea that memories from your childhood, it’s still pictures, for my generation and for yours, now it’s going to be different. I like the fact I was shooting with a still camera, the feeling, like those memories from childhood. But it’s really because the image has a strong cinematographic feeling.

Sam: I know Tomboy came together very quickly, and that you had been working on the idea but banged the script out very fast. Do you think that benefited the film, or when you watch it now do you think ‘I wish I’d had a few more months to work on that’?

CS: I think it benefited the film because I knew it from the start, it was my own decision that I only had three months between writing and shooting to bring the movie to life, so I made the script thinking about that, thinking ‘okay it’s going to be only fifty sequences, not too many sets’ because I wasn’t trying to make something that big [a large gap between her hands] fit something that big [a small gap between her hands]. But of course sometimes you have regrets, but that’s not a matter of scale, it’s a matter of pragmatism, you know? But the whole energy of the film was like that, it’s been an amazing experience but I don’t know that I’ll do it again. One of a kind.

Sam: You also said that you didn’t expect Tomboy to be your second film. Do you have one you expect to be your third and is it getting made?

CS: [Laughs] No. I don’t know yet. I wish I could do TV, I’m interested in TV series also.

Sam: To tell a story across a longer period?

CS: Yeah, to follow characters for a long time.

Sam: And just a quick final question; aside from any of your own, what’s one film you would tell everyone to see.

CS: Oh… The one I’m always showing to people when they haven’t seen it is Mulholland Drive.

Thanks to Celine Sciamma for sitting down with me, and to Peccadillo Pictures and Premier Pr for setting up the interview. Tomboy opens on Friday and is one of the best films of 2011 to date, and Sciamma’s Water Lilies is on DVD and is one of my Top 100 films. Check them both out, and Mullholland Drive if you haven’t already, she’s right, it’s great.