Interview with Mary Kerr and Radioman 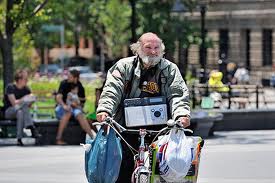 A firm fixture in the New York film industry, the enigmatic former homeless Radioman is coming to London to promote the documentary of his life. With a resume of over 100 films and a list of acquaintances that includes almost every Hollywood star that passes through the Big Apple, Radioman is a form of star himself but it has taken documentary maker Mary Kerr to bring him to the wider public. Front Row Reviews was lucky enough to have a chat with the director and the man himself.

Front Row Reviews: When did you first learn of Radioman’s existence?

Mary Kerr: I first heard of Radio through my now-producer Paul – he’d been working on a film set in New York as a runner. One day Radio turned up and treated the film set like he was the producer – grabbed food off the catering table, went up to Robert DeNiro and gave him a hug (“Bobby!”), bossed the crew around… Paul asked around about him and was told he knew everything about the film world, how to get work, anything. So Paul – who was and is a huge Indiana Jones geek and was desperate to work on the fourth one – asked Radio about it, and where nothing had worked before, Radio reeled off the right phone number and the date they were starting filming and every little detail. And then by the time we went up to the Indiana Jones set, Radio was there in costume, eating out of a rubbish bin, chatting to Steven Spielberg…

FRR: At what point did you become interested in making a film about him?

MK: Pretty much immediately. He was just fascinating. We were both shocked no one had made a film. “Radioman” just sounded like a title, too.

FRR: What is it that intrigued you about Radioman?

MK: I loved the idea of someone described to me as an “angry, crazy little man who knows everything about the film industry”. I loved 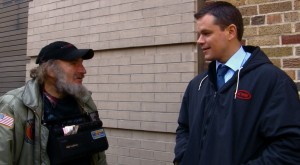 the sound of his get-up, with the bike and the radio… And I’ve always been fascinated by the homeless: that there’s this sort of homeless “uniform” none of us ever look past, that we walk by homeless people on the street without a second thought, but each of them has a potentially unique, amazing story going on about them. The idea that Radio is seen by most people as your run-of-the-mill bum, but every night he has a different magical experience – hanging out on the street with the Batmobile, chatting with Meryl Streep… – that you would never expect.

FRR: Do you hope to aid him on his quest for stardom with the film?

MK: I just want him to be happy. It’s not up to me to try to push him forward or make things happen for him, but just through wanting the best for him and giving him opportunities to tell his story and share his personality – it’s the same now. We’ve brought him over to England for the premiere and suddenly he’s spontaneously dancing around in Soho Square attracting a crowd… It’s not an active thing, but the second something like the documentary gives him a platform, he makes things happen for himself. He makes himself the star without needing any help, really. 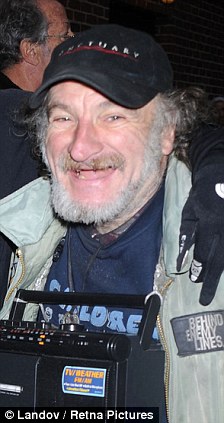 FRR: How do you feel finally being the star of a film?

Radioman: I don’t know how to put it into words. I just portray myself and let other people judge.

FRR: Are you happy with the final production?

Radioman: Oh yeah. I thought it was excellent, very well done – the coloring, the sound, the editing… it all looks great on the screen. I can’t wait for the premiere here in London.

FRR: Did you find the Hollywood stars eager to get on board with your film?

MK: They were really accommodating and interested. The huge majority we spoke to – and certainly everyone in the film – really genuinely cares for Radio, and there were more than one who told us when we interviewed them that the idea of the film being a celebration of what makes Radio unique was something they really wanted to be a part of. And then there are the people like Jeff Bridges, who we didn’t contact for the film, but suddenly we’d get an email saying he’s really curious about Radio and can he get a DVD. He really is a sort of lynchpin of community to a lot of famous actors – there’s so much about that lifestyle that’s transient, and Radio’s a grounding, reassuring constant.

FRR: In terms of funding and publicity, did you find it helpful to have so many stars involved?

MK: It didn’t really make a huge difference, surprisingly. Their involvement felt to us like it would make the documentary a reasonably safe bet – especially as the film itself is very low-budget – but the documentary funding world today is sort of geared towards funding issue-driven and politics-driven documentaries, and we didn’t really tick the boxes of any funding body. In terms of publicity it’s hard to tell but I imagine it must be helping us a bit – it’s hard to carve a place out for any low-budget documentary by first-time filmmakers. “He’s a homeless guy who knows George Clooney, Robin Williams, Meryl Streep, and they’re all in the film…” – it grabs attention.

FRR: Would you consider doing a follow up at a later date to update Radio’s followers as to his progress?

MK: No – we were really lucky to film him and capture him at a great, fascinating time in his life, and whatever happens now is a different thing. We’ve filmed him around the festival circuit and are filming him now as the film gets released, to use as extras on the DVD, but nothing beyond that.

FRR: What did you think about Radio’s relationship with the stars having observed it on several occasions? Is there 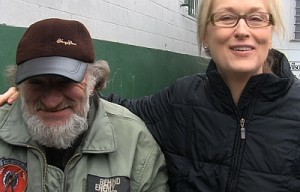 any more to the relationships that we don’t see in the film?

MK: There’s a lot to those relationships that aren’t in the film, yes. Some of them have done such nice things for him – given him things, arranged things for him – but it all felt anecdotal in the film. And then there are beautiful relationships we don’t even mention – Leonardo DiCaprio and Radio have this really close friendship where they speak to each other in this language Radio made up, but it’s not when there are people around, and neither of them publicises it.

FRR: How did you find the experience of seeing Radio’s scene being cut from Remember Me?

MK: It’s always heartbreaking because he’s a friend and he gets really excited and puts his everything into it. But at the same time, what’s beautiful about him is that he doesn’t stop. Nothing brings him down. So while I was still feeling bad for him, he was already excited about the next big film part.

FRR: You were not afraid to show the more troubling side to Radio’s past. Did you form a good partnership with Radio in order for you both to feel comfortable finding a balance between the lighter and darker moments?

MK: We did. At the start Radio expected the documentary to be basically a video scrapbook of him and celebrities – he really thought the fact that he knows famous people is the interesting thing about him, not his personal life. But we kicked it off really quickly and really enjoyed just hanging out together and after that it just takes a little bit of time to establish trust, because it’s a very vulnerable thing to open up your whole life to strangers and the general public. Paul and I also made sure to always explain to him why we wanted to know certain things, why it was important in portraying him truthfully. 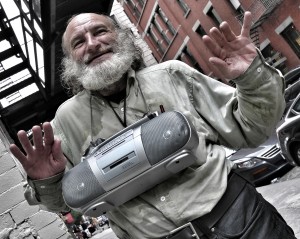 FRR: Was it easy to open up to Mary and create such an in depth film?

Radioman: In the beginning, no, it wasn’t that easy – I had to tell her about my life, which I didn’t want to delve into too deeply. It was a little nerve-wracking and frustrating at times. But we got through it and it got easier and I’m happy with it now. I didn’t know how serious they were at the beginning, but I went with them anyway. I believed in them and what they were doing and got to trust them. It took so long – they needed to re-shoot things, re-record lines all the time – but I then saw the reasoning behind it, that they wanted to get it just perfect.

FRR: This is your first time as a director of a full feature film. Was it a steep learning curve? Did Radioman make it easy for you?

MK: Radio doesn’t make anything easy for you – he takes deep mischievous glee in sabotaging everything. He’s so warm and so sweet but he’s like a Looney Tunes character – he revels in the chaos.

Regardless of him it really was a steep learning curve – figuring it out how to do sound, the editing process, everything. But to have the opportunity to do it hands-on, with just Paul, and to make mistakes and learn from them, was really invaluable.

FRR: Do you think this film will help you on the quest to stardom?

Radioman: It might be a stepping stone yes, I think so, once word of mouth gets around and people see this, they’ll say “oh he’s not just a bum with a radio around his neck, there’s more to him than that, he’s got some talent, let’s use him”.

FRR: Do you think there are still many pages to write in the book of Radioman?

Radioman: It’s only Part One. There could be a Part Two.

Radioman will screen at the Prince Charles from the 17th October.