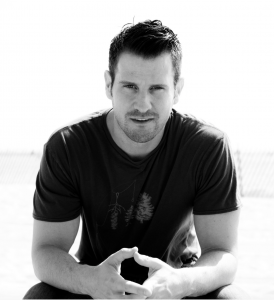 It has become the contemporary embodiment of the term ‘cult classic’. Elevated into the revered echelons of such a classification by a huge, fervid and affectionate fan base, Donnie Darko is the apocalyptic and metaphysical film that propelled Jake Gyllenhal’s career and also that of its writer/director, Richard Kelly.

Kelly has now returned to the film for its 15 year anniversary. This anniversary has afforded him the opportunity to spruce up the original negative into what has become a pristine 4k presentation/restoration, and he has also been able to subtly and tastefully tinker with some of the effects.

Front Row Reviews sat down with Kelly to discuss all things Darko. This included the dark places he found himself in after the poor initial reception of the movie and also that famous ‘Mad World’ music segment that has since gone down into the annals of great movie scenes.

“We thought the movie was going to be taken away from me, cut down to 85 minutes, all the music removed and dumped on ‘straight-to-video’. That was very likely to happen at one point”, he tells Greg Wetherall.

What has it been like for you revisiting Donnie Darko after 15 years?

It’s been great. Arrow Films contacted me and said, ‘we want to do a 4k restoration’. That was music to my ears, because the film has never been properly maintained. I was never happy with the transfer or Blu Ray. It just never looked right. It hadn’t been preserved properly. They (Arrow Films) gave us these great resources to go back, find the original negative and use all of today’s technology to present the film in a whole new way; in a way that no one’s ever seen it before. We could do some visual enhancements in places where things hadn’t been finished properly. It was a lot of work, but I had a window of time and some availability to go and do it. It’s been great. 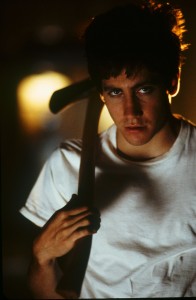 It’s been documented that it first found an audience in the UK. Do you think it caught something in the zeitgeist here?

It really caught on here for whatever reason. It caught on in the US, but not as quickly. I was blown away by the response when I came over here in 2002. It was really life-affirming. I was overwhelmed. It gave me a second wind. I can’t say why it was here. Maybe it was something to do with the music, being all UK-based pop songs. It is an American story, but there is something universal about being a teenager and confronting the big metaphysical ideas in the film. But maybe there was something about the British pop music that really connected here.

You have that famous dialogue-free ‘Mad World’ scene in the film. Was there a particular inspiration for that?

I love incorporating music into my films and it’s always by design. It’s often planned ahead of time; written or choreographed into the script. Those are the lyrical moments that, to me, are the most cinematic. I always want to protect the lyricism.

Sometimes, it’s a challenge to do. That Tears for Fears sequence in the movie is at least 2 minutes long and no one is speaking dialogue. It’s just people moving through space and connecting. There’s a lot of story, there’s a lot of narrative in that sequence and it’s completely essential to the film, but when you’re dealing with financiers and you’re dealing with a studio, people want the running time to be shorter – they’re looking at that as superfluous, self-indulgent lyricism. I’m like, ‘that’s why I’m doing this! The only reason I am doing this is for the lyricism!’

A lot of time, those are the scenes that make the films longer and (more) unmanageable. It becomes a real fight to protect this stuff. No one is talking and it’s two minutes of screen time. 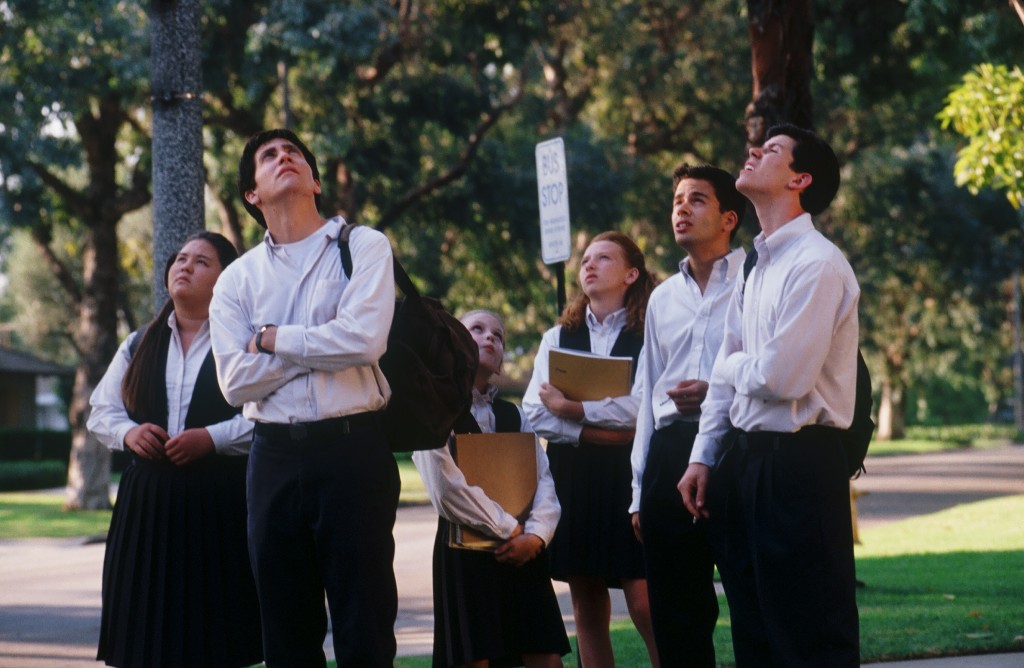 At which point did you know that the ‘Mad World’ scene was particularly precious to you?

From the very beginning. It was written in the script that when they jump out of the bus and Jake’s feet hit the pavement, the piano note begins. I saw it. That was it. It had to be this way. In Southland Tales, with Justin Timberlake lip-synching to the Killers, it was the same thing. He’s lip-synching to the Killers, there are all these dancers and he’s got a Budweiser… I just saw it. You then have to convince the producers to let you take a day to film it. But you don’t have the rights to the song, so the producers are like, ‘you’re fucking insane. We don’t even have the song! You don’t even know if you can get the song. The song might cost up to $200,000 and we don’t have that!’ You have to pick your battles and those are some that I picked. 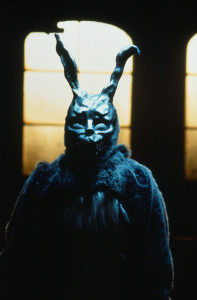 How do you feel about the director’s cut against, say, the theatrical cut?

I don’t favour one cut over the other, which is why, when we did this restoration, we were very specific that we’d do both cuts. I was actually able to do more enhancements to the director’s cut, because there was some stuff that was never finished properly. We improved some of the visual effects in places. I think both cuts have their virtues and I’m not entirely satisfied with either of them, completely, but they are what they are. I was really grateful that with this restoration, we were able to go in and make the image look so much better, specifically on the big screen, because a lot of people haven’t seen this movie on the big screen. It’s a significant improvement.

When we made the movie in 2000, there wasn’t any high profile sex scandal involving a big celebrity. I think we just thinking we were going to deconstruct this self-help guy, who shows up in the town. He’s clearly full of shit and we thought, ‘what could be the worst possible secret? Or the most sinister back story for this character?’ It became a twist in the movie and he became one of the multiple villains in the film. You’ve got different degrees of antagonism in the movie. You have the bullies, Seth Rogen and Alex Greenwald. Frank is an interesting metaphysical conundrum. There are a lot of different archetypes in there. 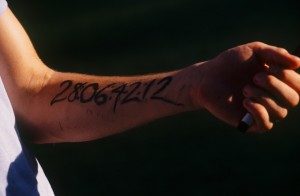 What were you looking for with the casting of Donnie? Gyllenhal seemed to achieve the difficult task of making you sympathise with him, but not root for him.

He was the right actor for the role. I think that you know that a film is connecting if you cannot imagine anyone else in the lead role. That’s the right guy. It had to be Jake. I think that he just worked really hard. We both spent a lot of time with the script, going through every scene, and he would ask me to make adjustments to the dialogue. He was very focused. We knew that we had to get it right. It was a really delicate and emotional balancing act, trying to modulate Donnie’s arc. We shot a lot of the movie out of sequence. It’s an independent film, after all, so you have to shoot out of sequence. We had to map out the timeline and figure out where he was emotionally on every day of shooting and where he’d be on the calendar of 28 days. It was a big undertaking and we had to be very meticulous in mapping it all out.

You mention about making adjustments to the dialogue. Were there any improvisations on set?

I always do a little bit of improv. For Southland Tales, we did a tonne. I mean, I had half the cast of Saturday Night Live, like, come on, we’re doing improv! I always leave room for it. It’s the best thing in the world when you’re on set and someone has a good idea, but it’s not yours. You thank the person for the idea. It’s a collaboration, you know? It’s a blessing. I’m always down for improv. The foundation of the script has to be sound and, thankfully, for this script (Donnie Darko), we had a very solid foundation to work from. 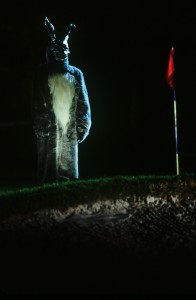 I’m curious. If you had control of your own timeline, would you have liked the success of Donnie Darko to have come a few films down the line? It’s like have a smash hit debut album and then having the pressure for the second record…

Hindsight is all 20/20. I think the order was meant to be the order. It was not a success until it came to the UK. It was a disaster at Sundance. It was a flop in US cinemas. It took time. All movies take time. I’ve learned that you can’t really control the wind. A movie, when it’s released, has the wind either blowing at your front, or at your back. You can’t control the wind. I just try to follow my instincts and I think that with the next film we’ve tried to make sure that all the elements are going to be in place. I hope the wind will be at our back.

Did you have some low moments when Donnie Darko was first released and you were greeted by that Sundance flop, for example?

Oh yeah. It was really sad. We thought the movie was going to be taken away from me, cut down to 85 minutes, all the music removed and dumped on ‘straight-to-video’. That was very likely to happen at one point. That would have been crushing. But we survived it. We figured it out, you know? There were some dark times, but that’s Hollywood. You gotta survive it. You gotta figure it out.

Donnie Darko is re-released in cinemas from 23rd December 2016. 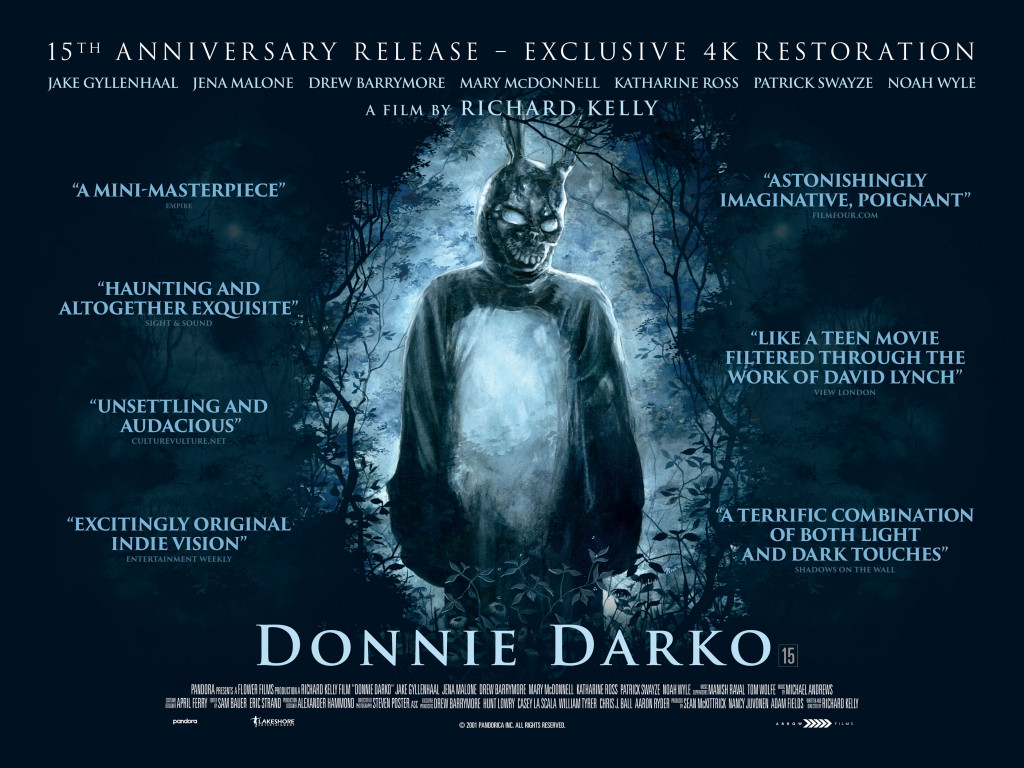