“Basically I just write, I write about people and try to find the truth in situations in the things I write about. You just hope that is going to appeal to everybody, or at least all ages. It’s the most important thing to me that it connects with the audience.”

As Eirene Houston walks into the Caledonian Hotel lounge bar to meet me for this interview there is an air of confidence and achievement surrounding the former school teacher turned writer. This is perfectly understandable given that she is in Edinburgh to see the first screenplay she has written to be made into a feature film. Day of the Flowers is not only being shown at the reinvigorated 2012 Edinburgh International Film Festival, but is one of the nominees for the prestigious Michael Powell Award. “That is nice!” says Houston, “obviously on the one hand you’re very excited and of course I’m just dying to get in there and see how people like it!” 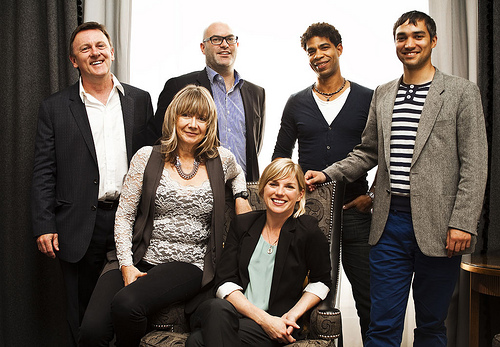 Day of the Flowers follows two Scottish sisters who make their way to Cuba to find out more about their parents who visited the island annually. One sister is a traveller and activist desperate to immerse herself in the culture while the other appears more superficial and only interested in the local nightspots. The sisters bond on their quest to become more familiar with the island and the people their parents loved so much. The idea is something very personal to Houston as she herself has spent much time in Cuba, lending more passion to the film, her knowledge and love for the country shown in the optimistic way Cuba is depicted, vibrant and romantic.

Initial signs are good, as Houston found out during an encounter with some school children lucky enough to catch an early screening. “It was nice because you don’t know how it is going to appeal to different people. One of the other girls said she had been told to say how much her father in law had really liked it, so that’s 16 year olds and he was in his sixties, so if we can appeal to that demographic then that’s really good!” Houston knows that it is impossible to appeal to everyone but is hopeful of her work being accepted by a wide audience. Instead of thinking about the film’s appeal, she instead focuses on doing what she loves. 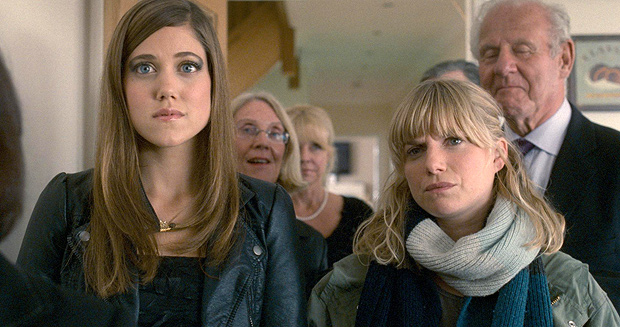 There is a slight nervousness in the calm exterior of this veteran writer. Her first screenplay that has made it to the big screen after years of selling but with no final production, though it has come close on some occasions. To finally make it to the cinema screen was her goal and now that this has finally happened, she can be forgiven for feeling nervous about the outcome.

The nerves are heightened considering the gestation period of this particular project. “When you write things you usually get ideas that stay with you, but they don’t necessarily get to a point where you have a story” says Houston. “I had been to Cuba and really wanted to write a story set there and had various ideas but it was certainly a while before it became a concrete idea.” The idea was planted in her mind long ago but even after getting a story together it still wasn’t easy to find someone as passionate for the project as she was herself. Although director John Roberts eventually became a creative partner with whom Houston enjoyed a fruitful relationship; having been to Cuba herself, the fire to create a story was more intense. “I feel you have got to really know about a place, I see a lot of films set in Cuba or about Cuba and it seems to me that the people only have a surface idea of it.” A Cuban cinematographer had inspiring words for Houston. “[He told me] Out of all the people he has met that have come from Europe or anywhere else, I’m the most Cuban”, Houston regales followed with a hearty laugh before reminding me of the seriousness of being as authentic as you can about the place. “I know that authenticity, and Cubans will know that authenticity but I hope it will come through to people who have not been there, I think it will. Things work on lots of levels.”

The writer is proud to have written a successfully made a film about two women. This is something Houston believes to have been an initial obstacle for her screenplay to be accepted. Some people had intimated to her that she should change her story to feature a journey with two men. But then listening to Meryl Streep being interviewed made her more determined that females would be the core of the film. “I heard Meryl Streep just say that films about women make money, so why don’t people want to make money? With the success of Streep’s two recent films, The Iron Lady and Mama Mia! as well as Bridesmaids, these films are low budget and make lots of money but people still don’t want to make films about women” stresses Houston. She is aware that sexism still exists in the industry and sternly states that it’s not a very smart move. “It’s endemic; people just believe that things have got to be about men, it’s ludicrous. I bet more women go to the cinema than guys do! People thought years ago that women would see a film about men, men would see a film about men but men would not see a film about women, which I think isn’t true but that’s what they say.” 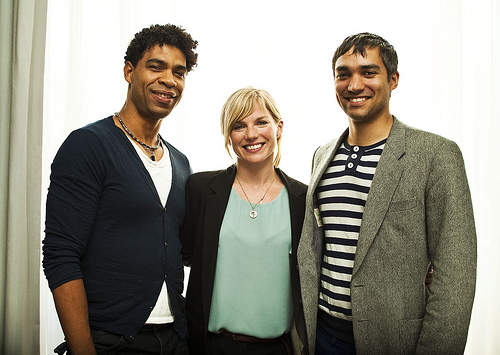 After taking on the disturbing barriers to gender and being victorious, Houston found that writing about someone who was older was going to be as complex an obstacle, one of many that she found she would have to sidestep or accept when making the film. “You have got to get a star, whether they are right for the part or not. Then since it is made in Cuba you can’t use American actors” observes Houston. These are hurdles to negotiate when thinking of the finance of the film. Finding a balance between art-house and populist cinema is always a tricky thing and Houston believes hers is a fresh approach which tries to straddle the divide, although it may have been blunted somewhat by the expectations of the industry. “When I started off it would have been smaller and a bit artier. I want to appeal to as many people as possible but I think people are smart. You can do things on a lot of levels and they will get it.” Changes had to be made but to make a film in the British industry that is not completely dark and has a happy ending is something that Houston admits was a frustrating mood to work in. “I wanted to write something different. There is a tendency to feel that darker films are more laudable but in fact it is harder to write something that is lighter, that tries to have depth and is more positive. It is hard to travel that path rather than an easier route.”

Though the premise for the story was conceived after Houston’s initial trip to Cuba, some of the seemingly more fanciful and comedic moments happened to the crew while they were in Cuba getting ready to film. A character bringing a sandwich maker and being stopped at airport security may well appear to push creative license to the limit however this is not the case, the incident is taken from a crew member’s experience . “A Sandwich maker uses a lot of electricity; it could light up a small village! There is a limit to electricity so this is the kind of thing that could cause problems” says Houston. “Once the script had been written, a lot of the things that were added happened to the people that were on the crew.” Ending up in unknown restaurants with pigs being slaughtered in the next room and chickens running around the place were all experiences picked up while in the country and instead of removing them for aesthetic purposes they were kept in to add to the authenticity.

Houston uses her first emotional experiences in Cuba in her script and tried to help the audience understand what it is like for a first time visitor. Although some of it is done in a very slapstick manner, there is much to be learnt about the danger and hidden marvels of distant and strange lands.

The more jovial Scottish elements were also something encountered on one of Houston’s trips to Cuba. “Five guys walked into the place wearing kilts and there was one of them standing at the bar. These two girls were looking for tourists and were amazed by the kilt and were trying to lift it up. I just thought that it was hilarious.” The most clichéd of events but it did happen and was added to the film, due to her commitment to authenticity, as with many small instances of humour and truth that attempt to add depth to her work. Although not always successful during Day of the Flowers, it is something that must at least be admired. “I used things from when I first went to Cuba, when I was naive and got a bit of a shock. Then you are trying to do two different things by using that and the knowledge of being there a lot more and trying to bring that together.” 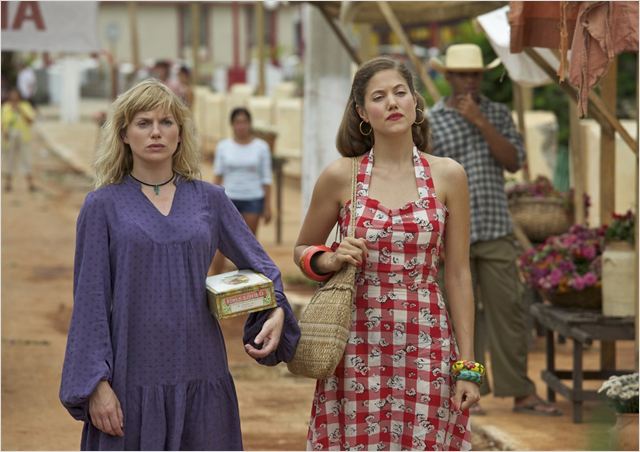 Day of the Flowers is very much Eirene Houston’s baby but for a writer whose screenplay has being filmed for the first time, issues of control were always going to be at the fore. Although she had good relationships with the director and producers, a lack of experience left Houston with only a small amount of control over additions to the script. Roberts was very open in suggesting ways in which Houston could alter her script and she was open to trying things due to the closeness of their relationship. “John wanted some action scenes, I had never really written any action. I had some kind of mad things in there that were just going to be too expensive. I had a water scene and things that were just a bit too mad” reflects Houston. In terms of casting, Houston had to let go of any control, but Roberts was an honest and fair colleague. “It’s really the director and producer’s decision, but if I said “I hate that person” or “over my dead body” they may listen to me and what they will do is at least see people I suggest.”

There were many points when Houston worried her dream of completing the movie would never happen but having a collaborator like director John Roberts helped her traverse the stumbling blocks. Making an independent film with no studio backing, Houston and Roberts were aware of the time it would take to get the film completed but were determined enough to make it happen. The film is finally here for Houston and she admits without Roberts it may never have happened. “We respected each other” recalls Houston, “I need to know that he has the confidence in me and vice versa, and we had that. You have to be very straight with each other. We trusted each other”.