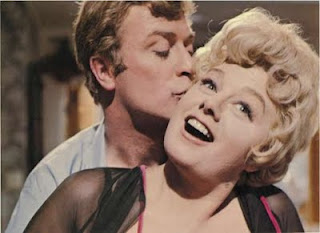 As we embark on this newly found appreciation for British films with the ‘Made In Britain’ season, it seems only natural to take a look at one the most influential movies of a well-loved English acting veteran. Sir Michael Caine has graced us Anglophiles with an endless streak of unrivalled performances, The Italian Job, Educating Rita, Get Carter, to name but a mere fraction. One masterpiece however, that for me belittles even those, is Lewis Gilbert’s Alfie (1966). The Caine-classic, born off the back of the British new wave, went on to undeniably leave a dent in the timeline of great British movies.

The new wave in Britain or the age of free cinema meant that independent filmmakers were to make films that spoke to a new international audience. We see abortions, homosexuality, affairs and even drunkenness on our screens; what most critics of the time and of any time stamp as ‘reality’. Although made in 1966 and therefore born outside of the British new wave, Gilbert’s classic still lends itself to the movement as it boasts a range of taboo subjects that the wave had permitted; most evidently, abortion and adultery. All these new elements had developed out of free cinema and there was this newly found optimism in British filmmaking.

Unlike most mainstream movies, Alfie refuses to become ephemeral. In 1966, it did something for British cinema in way of breaking the aggressiveness that was inherent to the inter-war blockade of filmmaking in Britain. Suddenly, the British public began to break free from the shackles of ‘war pictures’ (Inclusive of the comical yet increasingly tardy efforts of Ealing studios, which did nothing but remind its audience of its nation’s conflict, with titles such as Hue and Cry and Whiskey Galore) and even divorced the morbidity of the once conventional ‘kitchen sink’ movies, as Alfie stepped up as a personification of the ‘modern man’. 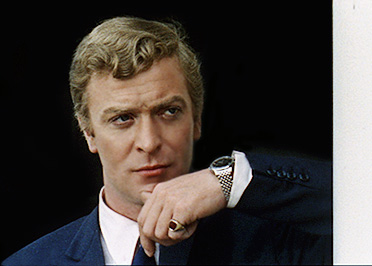 Michael Caine’s visionary rendition of an adulterous gentlemen rebelling against a rigid class structure and whilst looking after number one, demonstrates a break with the past or more specifically with the ‘angry young man’ stereotype of the 1950’s and early 60’s (Richard Harris’ Frank Machin in This Sporting Life).

As the comedy drama marks a prominent transition into the swinging sixties, its messages and values are surprisingly evident. Alfie, being the first film in where Caine’s name was above the title, boasted a societal ideal in where, just like the conventions of the new wave, were centred around the working class, or more specifically, on an ambitious male ‘hero’ trying to transcend the class that he was born in to. Corruption and class struggle are central themes here as we are subject to a unique take on society’s attitude towards the class structure of their time. One could suggest that a consideration for context is fundamental in the true appreciation of Alfie and its intent. 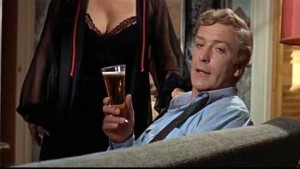 Our favourite cockney, with his clever asides to the camera, and his seductive, albeit feministic attitude towards women, peppers his role with a certain charm that seems only appropriate, given the clandestine lifestyle for which he so highly prioritises. This lifestyle, however, sees that our protagonist is sent on a journey of self-discovery, as he realises that there is more to life than what he has spent his existence in search for.

Alfie adopts a very suave and debonair outlook, however we soon learn that it is merely a façade as he still belongs to the plebeian majority. He is a recognized pretender of the bourgeoisie in his blandishments and navy blazer. To a war torn society, Alfie represented a new breed of working class, a man not on the hunt for luxurious status but for the proletarian aphorism of looking after number one. 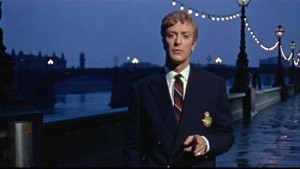 With all this talk of the Sir, a man with over one hundred and twenty appearances to his name, you’d think that he single-handedly carried Alfie into my list of outstanding British films. Well, to a degree, you’d be right. However, I have no intention of denying the likeable efforts of Shelly Winters, Julian Foster and Jane Asher, whose roles comprise the classic’s catalogue of women who serve not only to supply our bigamist with a next port-of-call, or more fittingly, the next pit stop en-route “home”, but to also allow Alfie to recognise the error in his principals.

Gilbert’s 1966 classic centers around life in London and the patriotic cinematography makes a point of framing iconic London landmarks like the houses of parliament and the tower bridge. The music serves a juxtaposed purpose to that of the camerawork, in that it is utilised to almost cover up the grimy and crowded streets in which a high-angle camera lingers upon. The fast-tempo, jovial score glosses reality in tune with the film’s overall effort to promote optimism. 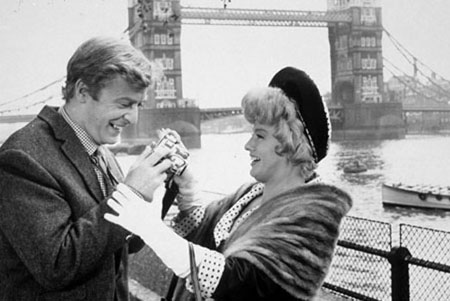 If ever a film could hold a purpose beyond the ninety minutes or-so that we’re sat in front of a screen, if ever the harmony of image and sound combined could mean something, there is a message that Alfie spits at us like a Viper’s venom, as our star intimately addresses the camera to deliever a final speech, which sees us out. Why not watch it and find that message for yourself – if not already.