They Came to a City Blu Ray review

Utopian realms were part and parcel of post and mid war life. The horrors seen by one and all had left many hoping for a better life. When this transferred to theatres, it became rich and imaginative. Adapted from a J.B. Priestly play and using almost all of the original cast, we are introduced to an almost perfect world. From a myriad of British people points of views, we start atop of a castle in the sky. Mist clouds as much of the surface as can be seen. A giant door opens and leads them down. Below is a city of vastness and uniqueness. Happiness, unity and human spirit are the currency. Some dislike this. Not having privilege of breeding, money and economic stance to allow them a leg up. Its an ideal city for some and for others its something else. The door will close at sunset. Anyone left here is staying forever more. 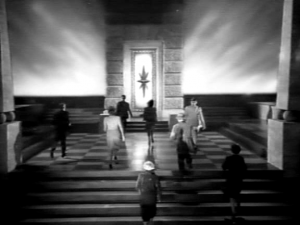 British cinema has often had a strange stance in regard to social theory. It didn’t produced much in the way of social commentary films prior to this, often because it was stuck in a monarchist patriarchy. Then it boldly took a position in the 1940s of reaching for the advancement of society. Transformed itself  to envision a brighter future for everyone sitting in the dark and eyeing the screen. In the 60’s Wood fall films and on to the 80’s films they were often forceful and played on the class divides. In They Came to a City, however you have a downplaying of societal ruptures and instead an examination of layers of optimism and subtle class synergy. Layers of what many were fighting and indeed dying for. A future world of unity, old traditions dissolved and newer ideas taking their place. From the Feudal, elitist British Empire and onto the universal, every man state. It doesn’t translate as effectively as it might have been hoped. Its makes its points, substantiates them well but feels often unbalanced. It never transcends its stage play roots and it often punctuates its points with emotion. This cheapens the point. Though it is effectively pitching to an audience from the time, it feels an admirable work that preaches. 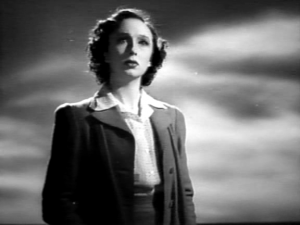 The disc is a collection of the excellent and the even better. The 2K transfer seems to loving craft the image, gifting it equally doses of light and mist. My choices are all of the war films but We Live in Two Worlds is stunning. Cavalcanti is a personal director and favourite of mine. Here he shows how to craft a gentle informative piece about an essential utility, without making the viewer bored or distracted.