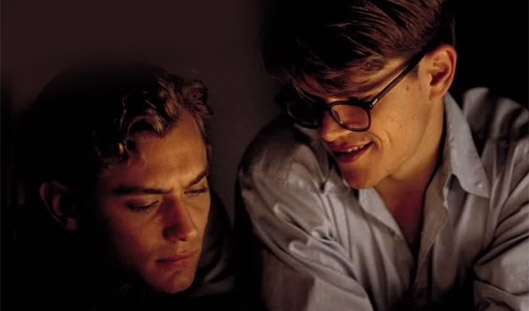 Adapted from Patricia Highsmith’s novel of the same name, 1999’s The Talented Mr Ripley is one of the finest films to be directed by the late Anthony Minghella. Boasting a stellar cast, the likes of Matt Damon, Jude Law, Gwyneth Paltrow, Philip Seymour-Hoffman and Cate Blanchett all give strong performances in what would have been the early years of their respective Hollywood careers.

The story goes that the eponymous Mr Tom Ripley (Damon), a man of great talents when it comes to forgery and stolen identities, is sent to Italy by the father of Dickie (Law). Dickie’s father wrongly believes Tom ad Dickie were graduates of the same Princeton class, and when Tom plays along to the case of mistaken identity he is recruited to bring Dickie back to the United States. When Tom gets there, he perfectly engineers a friendship with Dickie and his girlfriend Marge (Paltrow), but Tom’s feelings of admiration soon turn to obsession. What follows is a gripping tale of murder, passion, fixation and deceit – all the best ingredients for a taut and tense thriller.

Minghella’s artful direction is particularly suited to this kind of story, rich as it is in complex characterisation. His lingering shots of an increasingly deranged Tom are often poised with as much manic atmosphere and suspense as they are a feeling of pitiful tragedy – as a central character Tom is no hero, but a very sick man who we witness fall deeper and deeper into an abyss of lies. Damon’s boyish persona should be given credit for making Tom a lot more sympathetic than he should be; he’s full of as much naive charm and bewilderment as he is menace. Law’s strengths are also played to as the fickle, womanising Dickie, whose Classic Hollywood looks, sharp edged arrogance and fruit-fly attention span make him the object of so many people’s affection. 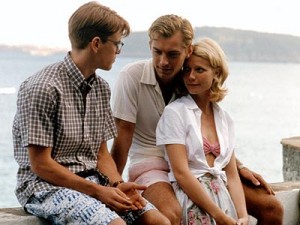 The plot weaves together more than a few narrative threads into one accomplished and absorbing timeline that keeps the viewer enthralled with the perfect mix of anticipation and despair.  Whilst there’s some minor blips with pacing (about halfway through you may feel yourself growing tired with Ripley as much as Dickie inevitably does), but thanks to some well executed twists and turns, in almost Hitcockian fashion, you’ll find yourself hurtling towards the film’s climax with giddy speed as Ripley spins his web of lies in more elaborate and desperate ways.

What makes the Blu-Ray edition worth the slightly bigger price tags is easily the newfound appreciation of the film’s set pieces. Set in Italy in the 1950’s, The Talented Mr Ripley seethes with a darkly vivid style from the interiors of Dickie’s lavish apartment to the stunning vistas in exotic climates. One already eye-catching scene in particular glistens a whole lot more thanks to the leap to high-def resolution, as Tom and Dickie share a boat road in the middle of the sparkling ocean under a mid-day sun, a tranquil setting that belies the film’s fatalist undercurrent.

Minghella’s gem still shines brightly, over a decade after it was first made. Thought-provoking and exciting, it isn’t often that a ‘psychological-thriller’ gets both sides of the coin right, and for that alone The Talented Mr Ripley stands among the best of the genre.