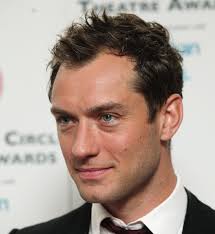 Jude Law has hit out at the media for being a crucial factor in ruining his marriage. The Sherlock Holmes star said his private life was consistently being ravaged after his Oscar nomination for his role in the psychological thriller, The talented Mr. Ripley.

“I would say that after the Oscar nomination there was a lot more interest in my private life, it raised my profile in the media.

“My marriage ran into difficulties around 2001 and 2002 and the media took an interest and they reported on it quite regularly.” He said when police showed him notes private investigator and convicted phone hacker Glenn Mulcaire held about him, he “was shocked to see the amount of information that had been accumulated”.

Law split from his wife Sadie frost 10 years ago and has 3 children with his fellow English actor.

Yesterday, Law discovered the News of The World paid off a family member to reveal the details of Law’s private life. Jude Law is currently going through legal proceedings over having his phone hacked. In 2005, the News of The World dropped the headline “Sienna cheats on Jude” after learning James Bond star Daniel Craig was having an affair with Law’s girlfriend, Sienna Miller.

Law is currently working in theatre as the main protagonist in Henry V. The court case proceedings are active and ongoing.