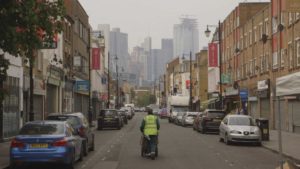 Gentrification will be the word of this generation. It has underlined the social chasm that led directly to Brexit and disenfranchisement. In simple terms, people who grew up in a location like Hackney in east London, are now unable to afford to live there. With property prices increase 1000% and cost of living there become increasingly less affordable, due to boutique cafes, restaurants and bars. Zed Nelson’s documentary explores this against the backdrop of Brexit. 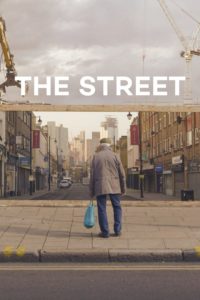 Nelson has lived in Hackney since the age of 3. He saw it from its gritty, real state of the 1990s. then its progression to locale of the young and the hipster. Using interviews with people ‘on the ground’ so to speak, Nelson reflects thoughts. from the old living in ‘social housing’ (a god awful term used by liberal types to wash themselves clean) and the working types, traversing the newly refurbished galleries, hip cafes, old street markets and creamy pie and mash shops. This conversation sometimes proves profound. Pinpointing the left behind. It also surprises. Some of those migrating in are business types, pushed out and finding only one place they can afford. Others however are frankly pretentious and odious. Interestingly Nelson documentary navigates three monumental moments and does so with depth and range. From the referendum vote, to the Grenfell tower tragedy. Change is coming and for reasons disparate and painful.

This is the films most potent theme. Change. Human life broken and fixed to things that are gone. Physics suggests their is the arrow of time. Nothing is static. There are no fixed things. This is true. The film begs us to ask the questions ‘what next for all these people?’ The answer is not readily available, Nelson should be commended for not looking for it. However at the end I thought, When all the new people who have moved in suffer change, will they complain about change like those they have replaced?