The Flowers of War DVD Review 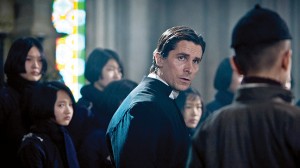 The Flowers of War was a long time in the making, in December, 2010, it was announced that the film would be made, and pre-production started the same month. They then began shooting on location in Nanjing, China, in January 2011. Many will be aware of the filmography of director, Zhang Yimou, who directed the Opening and Closing ceremonies of the 2008 Beijing Summer Olympics as well as House of Flying Daggers and The Curse of the Golden Flower. The reason that I was especially interested in this piece, was both because of the historical moment in time that the film dramatises and also the starring actor is none other than Christian Bale – an odd choice for a Chinese historical film, perhaps?

The dialogue of the film was shot about 40% in English and the rest in Mandarin Chinese (particularly in the Nanjing dialect, distinct from standard Chinese), with an estimated production budget of $94 million, which makes it the most expensive film in Chinese history.

I was expecting a film filled with colour, shining from every corner of the screen and epic action sequences which would put Hollywood to shame for their precise detail and attention demanding violence. And although The Flowers of War, certainly had it’s moments where colour consumed the screen, whether it’s an explosion, an assassination or simply the stunning costuming, overall I came away feeling the film had three apparent sections, which interchanged throughout the film. These were violence/war, women screaming and Christian Bale trying to portray a American broken man (in complete opposition to his broken Bruce Wayne).

The film is set in 1937 in Nanking, China during (what has become known as) the ‘Rape of Nanking’ during the Second Sino-Japanese War. A group of escapees (made up of young, innocent school girls, outgoing prostitutes and the American John Miller), find sanctuary in a church compound, trying to survive the plight and persecution brought on by the violent invasion of the city. Much of the film is concerned with the tensions within the compound, looking at the ways in which the schoolgirls and the prostitutes have to live together and put their lives on the line for each other. But at first this isn’t the case, and the two groups collide (stopping the prostitutes using their bathroom is a particularly memorable moment) but when John Miller suddenly decides that he is going to make sure these girls and women are going to get out alive, he switches from an alcoholic foreigner to a Priest like figure and he takes control. 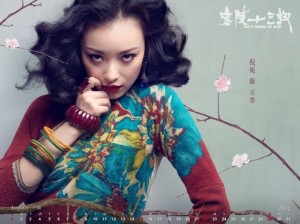 There is of course the usual romance between the de-factor leader of the prostitutes, Yu Mo (Ni) and Miller (Bale), which leads for moments for strained sexual tension. Whenever they are in a room together, the very heavy handed star lighting is there is persuade the audience that something is going to happen between these two and when it finally does, the result is a very shoddy sex scene where nothing is sexy whatsoever and the camera just seems nosey rather than interested in portraying this love affair.

Story wise, the twists and turns along the way are quite interesting, and I’d recommend the film on narrative purposes. The ways in which the groups have to learn to live together, and then come together against the soldiers makes for some of the best scenes in the film as well as some of the more emotional moments including when the young girls decide that a suicide pact would stop them being raped by the soldiers. Furthermore, the interaction of Miller with the young girls, makes for some interesting watching as he is learning just as much as the girls, about life, war and the ways in which humans must keep contact and connection with each other to be able to stay alive. Yes, narrative wise, it’s interesting that Yu Mo, is possibly the most intellectual character in the film and therefore the reversal of hierarchies in the film leads to a heartbreaking conclusion as the prostitutes take the schoolgirls places at a ‘party’ for the Japanese Army’s victory.

Rosalind Galt writes about the ‘pretty’ as something which has been a subject of contention within film studies and has been consistently denigrated as simply embodying “pretty” images: those that emphasise detailed composition, excessive colour, or decorative style. While the term deliberately invokes the triviality of “pretty pictures,” her writing questions this taken-for-granted rhetoric of value, proposing that the “pretty” is a recurrent taste category in film and that it reveals an imbrication of gender, sexuality, and race in the construction of the cinematic image itself. 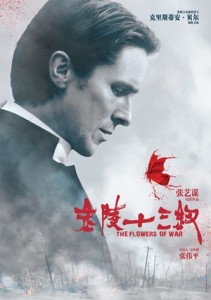 Galt’s writing is particularly interesting in regards to The Flowers of War, because many of the images could be considered ‘pretty’ by many standards. When bullets pierce human flesh in the film, the (often) slow motion deep rouge blood splatter brings the audience back around to the knowledge that they are watching a film and that many of the colours and textures are unlike those in reality. Unfortunately, unlike in The Curse of the Golden Flower, where colour was not trivial but rather something all consuming throughout the entire film, within The Flowers of War, the colour appears at random moments in what is a particularly dark, and somewhat bland looking location. Although they are shattering moments of colour, they do not add to the message of the film, and instead simply appear as a auteur technique gone wrong. But this point, only matters for certain moments of the film, the prostitutes costumes (as I mentioned earlier) are glorious, colourful materials which are the main source of colour throughout the film. They represent the hope for the future, so that the young girls can live unharmed and this is represented from the very beginning.

Finally, I just want to take a moment to consider Christian Bale who seems and acts a little out of place in this film. In the theatrical quad for the film, they have placed him right in the middle of this Chinese/Japanese bloodshed, and without trying to make too many racial remarks about the film, he doesn’t seem to quite fit. I have to question the reasons why Bale was brought into the film, and why they couldn’t have just had a Chinese priest in his place? Although the American Miller learnt as much as the other characters in the film, it just seems that the balance in the film was not quite right and it seemed difficult to comprehend an American in the midst of this bloodshed in the Orient.

Overall, the film is worth a watch – perhaps not a repeat viewing, but certainly an interesting experience and experiment by Yimou in doing a darker film with a more varied cast.