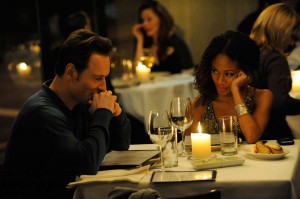 Shame is the latest feature from British Artist Steve McQueen. The story takes place in New York City and follows the life of Brandon, whose antics are soon revealed to be part of a sexual addiction. When his equally unstable sister comes to stay with him unexpectedly the true extent of his addiction and the disequilibrium it causes in his life becomes clear.

Steve McQueen is known in the world of film for his exploration of Bobby Sands’ last days in the film Hunger. Michael Fassbender plays Sands in Hunger and the lead role in Shame which is one of many similarities between the two films. McQueen also makes use of distortion with blurring techniques, a lack of cuts and makes films of an extremely visual nature. Although a lot is said in Shame through stares and eye-contact alone, dialogue is made use of as well as McQueen delves deeper into the mind of a sex addict.

The topic is handled sensitively. In a similar way to films like Trainspotting, there is an underlying deterrent from indulging in such behaviour due to the emphasis on the destructive nature of addiction. There are some particularly shocking and resonant scenes near the end which clearly emphasise the negative results of Brandon’s behaviour. The film title itself references the ultimately degrading results of a sexual addiction and the film really never attempts at finding resolution in such the situation but rather tries to portray how someone in such a situation would feel.
In terms of Art Cinema, Shame is exquisite and clearly from the mind of an artist. The cinematography is flawless; New York City has never looked so good. Shame also works as a great example of how beneficial high definition can be to art films with such stunning visuals. Rather than becoming style over substance, the film proves to be both intensely visual but equally deep in terms of subject matter.

One issue with the set up of the film is that it’s almost ‘too perfect’ at times. It often seems like Shame was meant to look uglier and grittier than it actually does; this may be one of the flaws of a film made by such a talented British artist. Michael Fassbender looks handsome even when he is having a breakdown and it appears that, through the eyes of Steve McQueen, all of the prostitutes in New York City could easily start careers in modelling. However, these factors really begin to re-enforce the point that many would see Brandon’s lifestyle as a dream but it is ultimately empty and internally damaging. He may be shown flitting between classy restaurants, his expensive New York apartment and an organised office but ultimately his environment does little to solve his problems.

The film shares similarities with David Fincher’s Fight Club in the sense that the protagonist endures the boring office life to pursue extreme personal activities out of work hours. However, it does eventually become apparent that Brandon’s addiction has started to creep into the work environment as well.

Carey Mulligan plays Brandon’s sister who is possibly one of the most unlikable characters she has ever played. Also not afraid to do nude scenes, Mulligan bares all at one point in the film. The idea of nudity and being ‘naked’ is present throughout the film and this idea is shown particularly in the scenes where the main characters are truly exposed. All of the explicit scenes in the film, which have brought some level of notoriety to its release, are relevant to the exploration and never over-used or meaningless.

Michael Fassbender is superb in the lead role. He has had a rather odd film career so far; ranging from Inglorious Basterds to Eden Lake to Steve McQueen’s art films; showing he is a very adaptable actor. There are also a couple of scenes near the end of Shame which really show how committed and open to the project he was.

Steve McQueen is starting to prove himself as a great auteur filmmaker who could go on to be a real success; especially in the world of Art Cinema. Shame shares many techniques with Hunger and, although not as directly gritty throughout, has the same resonance and mesmerising quality.

In the special features on the bluray release there is an interesting Q&A session with Fassbender which gives an in depth insight into Shame and what the actors brought to the project.