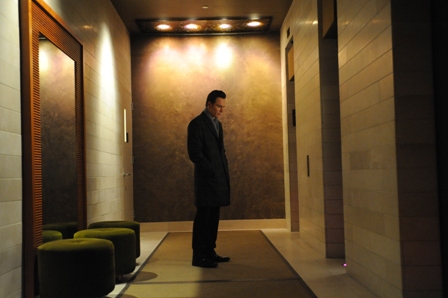 British director Steve McQueen is slowly working his way through the spectrum of human feelings. He began with Hunger, a film that gave cinematic life to the events within a prison where the hunger strike of IRA member Bobby Sands took place. And now McQueen has moved on to Shame, a haunting, lingering portrait of addiction that gives a snapshot into the life of a compulsive sex addict, Brandon, living in New York. It’s an elliptical film that unfolds limbo like, seemingly without beginning or end, and for this reason alone it exists as a remarkable achievement in painting the life of an addict. Layer over Brandon’s particularly interesting and contemporary addiction to fucking and it’s a recipe for a truly remarkable and impeccably filmed alchemical tour de force combination of performance, theme and direction.

Much like Coriolanus, also at the London Film Festival this year, Shame is a brilliant character study. It is a film urged along and told through catalysts, reactions, stimuli and fraught feelings and each ripples across the chiselled face of its captivating lead. Michael Fassbender plays Brandon, an individual that feels always one step away from unspeakable, grotesque actions. Despite his lithe, muscular physique (very openly on display throughout the film) he looks skeletal and feels truly like a drifting wound. He sleepwalks and flounders through life, fuck to fuck, and the unpredictability and uncontrollableness lent by the addiction infuses the entire film with a gut twisting dark tension, forever in apprehension of his could be actions. One particular post coital scene in a hotel room sees McQueen’s camera hold on a prostitute as she adjusts her bra in the mirror; the feeling that Brandon will appear reflected, seething and possessed, at any moment is overpowering.

Brandon’s sister Sissy (a heart-breaking Carey Mulligan) provides the impetus for change. Her crashing entrance snowballs events into a devastating climax. It also provides McQueen a fascinating opportunity to play with and explore the relationship between brother and sister. The sexual tension between the two, however incongruous with their relation, infects the film but there’s also some tender and beautiful moments which show the real weakness and vulnerability at the heart of both flawed characters. A shot of the two late in the film huddled watching cartoons really makes you wonder where these two have come from (as Mulligan asserts “We’re not bad people…we just come from a bad place”) and think how really neither of them has left their infancy. Brandon a boy obsessed with sex, masturbation and unable to control his urges and Sissy still inclined to play dress up and incapable of looking after herself. 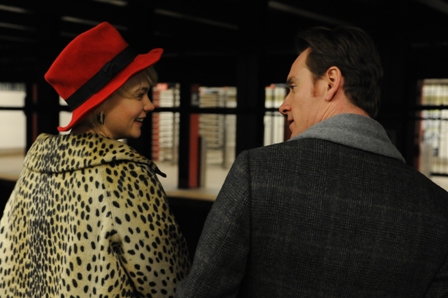 Don’t be fooled by Shame’s subject matter and don’t go expecting some slyly sexy cinema entertainment. This is bleak filmmaking at its finest with Brandon’s sexual encounters nothing more than cold, clinical, unattractive fixes. Indeed the only sex scene that arouses any sense of heat or excitement is the genuine opportunity at redemption provided by a spontaneous hotel room escape with a co-worker. Its failure provides a change in tone and the beginning of a further shift downwards onto a new plain of experiential suffering for Brandon.

Shame’s inclusion of porn at key moments evokes a notion of the negative effect of the immediacy of pleasure and the ease with which sex is available. Subsequently Fassbender’s character rejects traditional norms of relationships and the beauty of discovering something even deeper than he usually goes. It’s a pointed critique of the erosion the modern world’s corrosive attitudes towards sex, gender and promiscuity are having on the traditional values of family and love. Not only this, McQueen’s gripes extend towards the entire gender of men. Brandon’s existence as a sex addict in an obvious way shows this. But other subtle suggestions take root also. The framing of a male toilet sign juxtaposed to a disabled sign explicitly reminds how much men are victims, slaves to the sexual wanting that plagues Brandon.

The critique of the modern continues in a feeling of disconnectivity that permeates the entire feature. In similar fashion to American Psycho a failure to notice or care inhibits those around Brandon from looking beyond the façade of the ‘fine’. Brandon’s nondescript corporate job and spartan flat provide the furnishings of normalcy that belay friend’s suspicions. Even Brandon’s best friend and boss – in a wryly humorous scene – wonders whether it may have been his intern that rammed his hard drive full of explicitly pornographic material. It’d take a sick-fuck to do something like that but surely not Brandon though. Coupled with the faceless partygoers and featureless wasteland that make up McQueen’s vision of New York it’s clear that Brandon is a product of his environment; a beautiful veneer with a rotten underbelly. 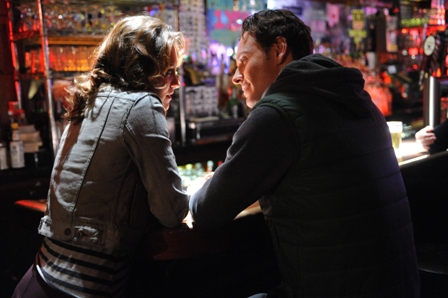 McQueen’s camerawork is steady, slow and elegant and he masters the use of long, captivating shots to enthral us in his work. A stunning rendition of Frank Sinatra’s New York, New York performed by Carey Mulligan and a quite hilarious dinner scene between Brandon and his one-time hope spring to mind as perfectly captured moments. Aided by sublime performances from his two key leads it has the effect of conveying an almost documentary feeling to the film – the notion that we are merely watching real events unspool from an arrestingly personal point of view.

Adjectives fail with a film this plain stunning and captivating. It is undoubtedly one of the best films to play at this year’s London Film Festival and is without doubt a front runner for awards glory suitably begun by Fassbender’s deserved win for Best Actor at the Venice Film Festival.