A horrific and awful South American country is boiling with unemployed contract workers. When an oil well in the deepest jungles explodes, only a shipment of dynamite can stop it.On offer is lots of money and escape from this god forsaken place. However with no clear roads and two old trucks, four men have to risk life and limb to get one shipment safely their and claim the reward. 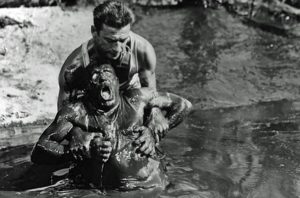 French cinemas masterpiece of suspense, action and explosive shipments returns to our screens again this week. Yes it is a masterpiece. Don’t take my word for it, watch it. This said should you pay for another release of a film that already is available? Has it extra content that is worth your time? Should you care that its remake is also out soon on Blu Ray and is equally as great a film? 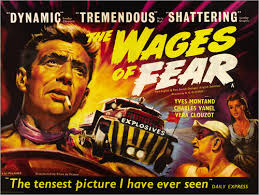 Firstly, should you pay for another release of a film that already is available? yes you should pay for the Blu ray. It looks amazing. The black is deep and rich, the whites are clean and crisp. Literally it is the best version of the film I have seen. It is also the longest version of the film in the UK. Some extra frames can both add and subtract but here they add.This alone gives it an edge of all other film versions. A film that is so good, that looks now so good and has extra running time to it. So yes you should really invest you cash in this.

Has it extra content that is worth your time? Ummm… In truth much of the interviews have been seen in the Criterion collection release. Lucy Mazdon is informed but I took little extra from it, as the films prior version had much analysis and texture. The booklet gives us old reviews and new writing. Nice but not explosive. The Guardian lecture is excellent and is the main reason to buy it. So yes the extra content pushes it over the edge

Should you care that its remake is also out soon on Blu Ray and is equally as great a film?  Yes and watch it as a double with this version.