THE FLAVOUR OF GREEN TEA OVER SPRING OVER RICE BLU RAY 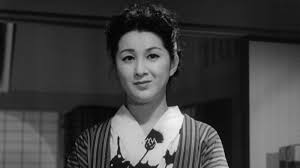 For the Cineaste, Ozu provides a wealth of opportunity to discuss and flex their cinema knowledge. Some will quote chapter and verse Mark Cousins and his extraordinary pieces on the director. Others will talk about the Japanese Melodrama and Ozu transition from silent to sound without losing his vision or gift for observance. Chances are that if you ever have or while study Japanese cinema, Ozu will be the start and its biggest lesser known director. 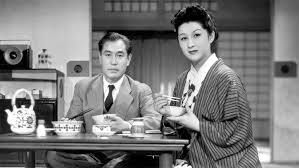 My issue with all of this, is often Ozu films get lost in his aura. Orson Welles is another example of this. Great films fall foul of a personality and a film communities obsessive knowing of details. Take THE FLAVOUR OF GREEN TEA OVER SPRING OVER RICE, released by the BFI (they have a huge back catalogue of Ozu films on Blu ray). A 1952 melodrama, people play, human tale of marriage, rumour, gossip and people living in a modern world, with age old problems. Its post war Tokyo. 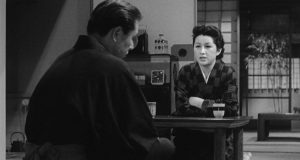 Two friends are shopping, Taeko (Michiyo Kogure) and Aya (Chikage Awashima). One suggests to the other to convince her husband to go on a trip to a spa. She calls and find he is not at work. She decides to make other plans after all her husband is no fun really. Taeko’s falsely claims to her husband that her brother’s daughter, Setsuko (Keiko Tsushima), is ill, so that she can go to a spa instead with friends. 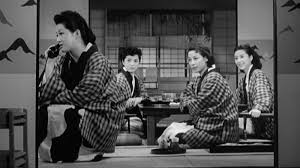 But all things are never simple and Setsuko visits her house unexpectedly. Taeko does some shifting around and substitutes to get consent from her husband to go for a break. Now at this point Ozu is just getting the story flowing. Other directors, then and now, would make a movie of this. But Ozu is (like Wim Wenders suggested) a film maker of bars, beer, communication and balance. This is what makes THE FLAVOUR OF GREEN TEA OVER SPRING OVER RICE tick. You are watching the human drama. 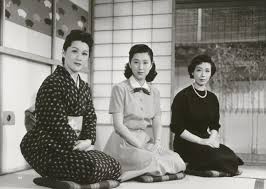 Love and longing. Hollywood called it the ‘Womans’ picture. I am not a woman but I love it. Time flows. Events, like the discovery of a friends husband at a baseball game with another woman, are extrapolated and meditated on. You have no sensationalism. We have characters sing french. Talk of American army surplus. Baseball and burgers. Ozu knew how to reflect the moment, with a calmness and clarity rare today. He made film meditative and oh how I miss it. 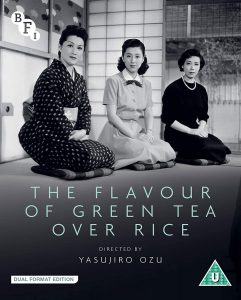 Which brings us to the BFI 4K. Well yes, I have the 1080 p Blu Ray of the other BFI OZU films (I hear TOKYO STORY is on its way to us 4K and all!) But I also have the standard version of THE FLAVOUR OF GREEN TEA OVER SPRING OVER RICE on DVD. Comparing to two reveals that the 4K has not only produced clarity in the frame but also stopped that horrid over white balance. It means that interiors are balanced and the frame is weighted for the eye. Or in layman’s terms, you see the 3 D of the frame. A room is a room, no a flat plain.

The Flavour of Green Tea Over Rice with commentary Audio Commentary by Tony Rayns, delivers a selection of Ozu related facts, Japanese post war related commentary and a very nice discussion on Marriage in Ozu work. It is rich in detail but feels more valuable because Rayns has embraced the form with vigour.

The Mystery of Marriage

Is both a little funny and takes an unexpected anthropological angle. Field is more scientist and commentator than film maker however it really is informative and works to the viewing.
Booklet

Tom Milne piece is a classic. He was an exceptional film critic and a commentator on Ozu lives via the balance and pacing of his films and the framing of their lives. Written here with other films mentioned, I would say this is a great piece to rewatch all of those Ozu films you should have in your collection.