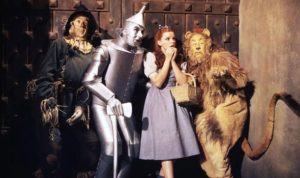 Iconic moments is a new concept from Warner Brothers. It will feature a series of films, crossing a series of genres, directors, decades and more. THE WIZARD OF OZ is one of the most iconic. CLOCKWORK ORANGE, ARGO, GOODFELLAS are the award winners. 300, INCEPTION and THE MATRIX are the stand out box office hits. Then we have THE TOWN, THE PRESTIGE and THE GOONIES for an ecletic blend. 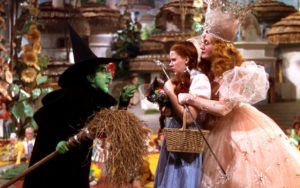 ‘We’re off to see the wizard, the wonderful wizard of Boz…’ In my younger days I used to sit with my niece to see THE WIZARD OF OZ. I would then create a version that was a parody of the film. A mediocre film can take a little gribing but this is no mediocre film. This is a masterpiece. A masterpiece based on a powerful and possessive story book. One that has been taken and pulled and pushed. If you are a fan of this film, then do read WAS or see WICKED. You see, THE WIZARD OF OZ can stand up to and hold its own against any parody. It is a imgainative take and I wont run over the film story, as you must know about Dorothy, the tornado that takes her to Oz, her friends. One a scared Lion, one a heartless tin man and one a mindless scarecrow. They want to visit the mythical wizard to allow him to grant them their wishes. The problem is a wiked witch has other plans. 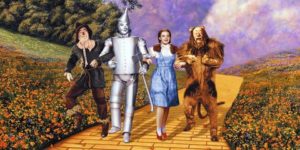 The 1080p has a little to answer for. It lacks the punch of a theatrical screening but…but…it has succesfully lifted the film to another height. The DVD was nice. Standard def had the colour flatter then it should have been. However the 1080p version, has really allowed some warmth back in, some depth back in and the whole feeling better than I have seen it in some time. The mono transfer is on par. We expect that really as the sound in this case, is so much more important as a device in this case. 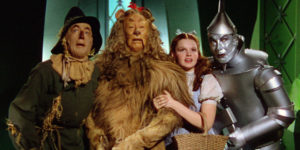 Ok. There is a lot of extra content. I would like to say that it is really an amalgamation of the 6 other discs taht have been released. So you have a sing a long. You have a flat documentary. You have a fact filled documentary. You have a series of pieces on the star, Garland (who will no doubt get another airing with the bio pic coming out.) Its well worth investing in, mainly to move on from the average DVD I (and I suspect you) have.

Extra Content
2-disc collection with over 2 hours of extras, including all new feature length documentary ‘The Making of the Wonderful Wizard of Oz’. Discover how this unprecedented production overcame the odds to become a movie classic and form an integral part of American culture. Plus commentary by Historian John Frike with the film’s cast and crew, Sing-along feature and much more.