From the Sea to the Land Beyond DVD Review 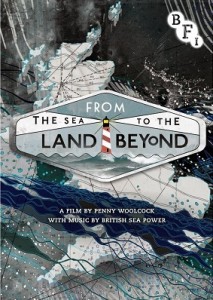 Introducing Mitchell and Kenyon’s 1901 film SS Saxonia in Liverpool, one of the several shorts included as extras on this BFI DVD release, director Penny Woolcock speaks of the historical currents that informed its production. More specifically, Woolcock notes that because this context and its social implications are not immediately knowable from the film itself, its use in her own film From the Sea to the Land Beyond was limited. The selection criterion is indicative of the film’s wordless fabric as a whole.

A cine-poem assembled entirely from archive footage, Woolcock’s latest work is heavy on texture and on historical linearity, and so Mitchell and Kenyon’s films – fifteen of which are cited here – are the obligatory fixture in seeing us off on this 73-minute journey through the 20th Century. Nevertheless, its textural development and certain editorial flourishes (by editor Alex Fry) are the product of an impressive wealth of sources that is historically valuable as well as aesthetically pleasing.

Just as a character in John le Carré’s Tinker Tailor Soldier Spy asks who will spy on the spies, so films such as this rest on the conceptual conceit of who will document the documents. Dependent solely upon received images, then, From the Sea to the Land Beyond presents the seaside, that natural or manmade threshold between land and ocean, as a hotly contested site of class and gender, of recreation and industry (tourism depends upon consumers as well as on a ceaseless workforce), of inclusion and hierarchy, all of which are interweaved under the guise of a democratic historical chronology. If montage is an inherently political act, Woolcock and Fry have done remarkably well to resist an overt agenda. Their film will repay repeat viewings precisely because its reference points are so multifarious; it’s possible that Land Beyond itself is a contested or contestable site, reconceptualising received ideas of the British seaside at the same time as reinforcing them.

In this respect, British Sea Power’s score, which was commissioned before Woolcock was approached to undertake the project, is the binding (and spellbinding) constant that anchors the ebb and flow of archive imagery. Woolcock notes in writing that her initial brief allowed the project to “be as lyrical and contemplative” as she wished – but its chief strength might be the music, which seems to heighten the ephemeral qualities of the moving image… and yet we’re watching dead matter reborn, here: the horizontal geographical travel depicted in and undertaken by these sourced films is complemented by the verticality of time travel. This seems especially the case when the playback is slowed, such as when holidaymakers leap from diving boards into the ocean in Marion Grierson’s 1935 travelogue Beside the Sea (included in full as an extra).

Three of the Kenyon and Mitchell films with which Woolcock’s film sets sail were shot in Blackpool, and, like a throwback to Andrew Kötting’s circumnavigation of the British coastline in Gallivant (1996), we more or less come full circle by culminating at the north-western seaside resort, which allows us to perspectivise the history hitherto traced. As the landscape architect who designed Blackpool’s Stanley Park, which was opened in 1926, said: “Blackpool stands between us and revolution.” The line is quoted in Patrick Keiller’s Robinson in Space (1997), not cited here but a film that predates From the Sea to the Land Beyond’s concluding reference, Martin Parr’s Think of England, by two years.

Keiller’s film was made at the onset of New Labour; Woolcock’s own cuts off at a historical juncture that already seems long ago – only it wasn’t, as its economic fallout is only now being realised, with our humble isle a floating contradiction between confused nostalgia and a beacon of resilience. Land Beyond captures this dialectical relationship effectively, blending images of wartime industry in such a way that gender and racial solidarity are present at the same time as the economic exploitation upon which our class society is founded. It’s difficult to interpret the conscious inclusion of a binge-drinking, bra-revealing Blackpool tourist seen in flat, cruddy digital at the end of the film in any way other than as the outcome of a particular economic order, one which encourages drunken escapes and seaside retreats in order to make its unpleasant financial imperatives of the nine-to-five working week somehow more tolerable.

‘From the Sea to the Land Beyond’ was released on DVD on 21 January.