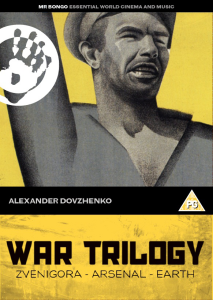 On one level, Mr. Bongo’s release of  Oleksandr Dovzhenko‘s so-called ‘War Trilogy’ appears to be doubly redundant. Not only was Zvenigora (or, to use its original Ukrainian title, Zvenyhora, 1928) recently released in a handsome six-DVD set of Ukrainian silent films, but that and the other two films that comprise Dovzhenko’s trilogy, Arsenal (1928) and Earth (1930), have also been individually available on Bongo’s roster for over a year: Zvenigora and Arsenal since February 2011, Earth since spring 2010. Furthermore, consistent with the company’s aim to release high-quality transfers whilst keeping production costs to a minimum, none of the DVDs here feature extras of any sort.

That said, this three-disc set will be a welcome, low-cost addition to any cinephile’s collection, bringing together three films from one of the great masters of Soviet film. Misleadingly labelled, the set constitutes what is more commonly referred to as Dovzhenko’s ‘Ukraine Trilogy’, and provides an invigorating focus upon the country’s staggered historical development from feudalism to socialism. (The Russian revolution, and the subsequent if ill-fated expansion of which Ukraine was a part, is all the more remarkable for having taken place in an area of the world that hadn’t even undergone bourgeois entrenchment.)

What shines across all three films is a two-fold celebration of historical progress and man’s endurability. Presenting his characters as raw types rather than as emotionally nuanced creations, Dovzhenko sought the essence in the particular, an artistic approach not without its pitfalls, though one which, with enough historical understanding, can (and here does) produce conviction in its sweep. Montage helps, too: relating centuries of labour and resistance, Zvenigora is a dizzying and often abstract mix of history and myth, as one old man (Nikolai Nademsky) seeks to protect and preserve “the treasures” in search of which Poles, Cossacks and Germans invade his country. Its opening shot  is itself something to treasure: raiders on horseback, riding through frame in slow-motion, wielding swords in some haunting demonstration of menace.

In comparison, Arsenal is more narrow in its historical scope, but no less formally audacious – or indeed dizzying. Beyond central protagonist Timosh (Semyon Svashenko), who returns home following the devastation of the first world war to eventually partake in the January Uprising, the film has both an exhilarating turn and a sense that time has stalled. Here a flurry of shots, there a sustained image made all the more powerful by the extent to which the performer is held mid-motion. Dovzhenko cuts in nearer to the frozen moment and presents a kind of raw truth amidst the swirls of lyricism. The scores provided on the DVDs are all excellent; that accompanying Arsenal is particularly effective. (As a sidenote, some of the subtitles contain distracting grammatic and spelling errors.) 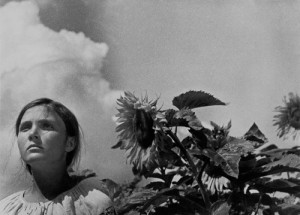 In Earth, the most celebrated and coherent of the trilogy, peasants discuss and welcome both industrialisation and collectivisation; their plans are met with hostility, however, by the more affluent, landowning farmers, who wish to retain private ownership of their land. Opening with sustained images of wheat fields, the film unfolds as a celebration of the dialectical relationship between the natural world and the material, human labour that both depends upon and affects it. One sequence depicts the process of bread-making as both furious and fruitful, a fascinating achievement in and of itself. On a merely imagistic level, though, Earth is an impressive and affecting assemblage of ideas and compositions. Some of these are remarkable. There’s a quiet harmony to the opening images of wheat fields, while a suggestive symbolism drives many of the compositions, in which human figures often stand side-by-side with sunflowers or machinery.

In contrast to the socialist realist aesthetic propounded by the Stalinist bureaucracy at the time, Dovzhenko’s films carry an ambivalence and ambiguity as well as a formal fluidity that ranged from expressionism to minimalist austerity. Cinematographic marvels, the three films included in this three-disc set predate the likes of Instagram by some 80 years with an unpopular trust in the transformative potential of the image, without the need for fussy filters or decoration. Revolutionary indeed.