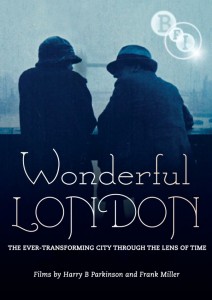 As the writer Samuel Johnson reportedly wrote, “when a man is tired of London, he is tired of life; for there is in London all that life can afford.” The subject of endless study, fascination, observation, of disgust and intrigue, of romance and awe – Johnson’s own first major work was a 1738 poem that took the city’s name as its own – London represents, for both its inhabitants and its visitors, the centre and therefore the end of the world. It’s a sentiment repeated in Patrick Keiller’s 1994 essay film London, made at the onset of late capitalism’s protracted death agony, which opens with Paul Scofield’s inimitable and ominous epigraph, “It is a journey to the end of the world.” (In 2005, Paul Kelly and Kieran Evans made Finisterre, an essay film designed to accompany London-based band St. Etienne’s album of the same name; its title derives from the Latin Finis Terræ, meaning “end of the world”.)

As the subtitle of this fascinating new BFI release notes, Wonderful London presents ” the ever-transforming city through the lens of time”. That is, forever changing but made eternally immortal throughout history, whether by Chaucer’s tales or Turner’s brush. The Dickensian peak of a literary vantage point was, in the 1890s, given cinematographic weight, when the Lumière brothers included the capital in their itinerary to record and present panoramas of the world’s finest cities. The unprecedented proximity to the real world given by the moving image offers a way of resisting change, of recording the process of things, and seems to have accelerated and heightened tensions between, on the one hand, the conservative tendency towards traditionalism and nostalgia, and on the other, the ongoing revolutions that drive the sprawling, daunting beast of (psycho)geography.

As the BFI continues to restore and release Alfred Hitchcock‘s nine silent films forty years after he returned to London to make his penultimate film, Frenzy (1972), and in the same year in which we’ve enjoyed or endured a Jubilee and await with varying degrees of enthusiasm the Olympic Games, London and representations of it have once again become hot property for writers, critics, travellers, historians, artists, architects, athletes and whatever else. Wonderful London is, then, a timely release, presenting twelve mid-1920s short episodes from Harry B. Parkinson and Frank Miller‘s ongoing travelogue of the city, made to illustrate the popular print magazine of the same name.

Six of the films have been digitally restored by the BFI’s National Archive to their original tints and tones: Barging Through London, in which we travel via barge from Limehouse docks to Paddington Basin via the Regent’s Canal; Cosmopolitan London, which looks at the city’s immigrant communities; London’s Sunday captures popular pastimes on London Bridge, Petticoat Lane and Hyde Park; Flowers of London focuses upon all things floral in the city, while London’s Free Shows rounds up free activities such as street entertainment, Punch & Judy, pavement artists and, among others, the consistent presence of road workers; London Off the Track, meanwhile, features views from behind the façades passersby normally see.

Six more films, restored via traditional film printing methods years back, are included as extras: Dickens’ London is a travelogue through real locations that informed Dickens’ writing; London’s Outer Ring sees a street vendor posit would-be destinations to his indifferent donkey in caricatured cockney; London Old and New is a horse-drawn tour of changing architectures, while London’s Contrasts compares West End to East; Known London is an all-out celebration of tourist attractions; Along Father Thames to Shepperton takes us up the Thames from Canbury Gardens to Shepperton, passing beauty spots and retreats for the well-to-do.

All films clock in at between 8 and 12 minutes at 18fps. The first and last of them contain barge-mounted camera-work that lends a visual calm as fascinating as the structures and settings it captures; all others are static compositions intruded upon by pretentious intertitles that are in themselves of historical interest. Indeed, beyond the fact that these films contain footage of buildings and people now long forgotten, their original narratives double as time capsules full of cliché and corn. It’s to the BFI’s credit that the release includes Cosmopolitan London, a snapshot of immigrant communities design to celebrate but more likely now to cause legitimate anger: in an “unsavoury Whitcombe Street district”, it tells us, we see a notorious eatery “famous for its negro clientele; ‘white trash’ are not encouraged here”, before moving to “sinister Pennyfields, where the Chink either slinks away at the sight of the camera, or bursts into volleys of hysterical protest; but perhaps he has a reason for his dislike of publicity!” (As Madness sing on their 2009 ten-minute magnum opus, “The Liberty of Norton Folgate”, “in the beginning there was a fear of the immigrants”.)

Across the twelve films, familiarity and unfamiliarity tussle in London’s vast topographical arena of over 600 square miles, with architectures of varied historical pockets competing for space within the same frame. Inter-war devastation hovers at the edges of their imagery and forced positivity in the same way that post-war confusion and embitterness hang over Norman Cohen’s The London Nobody Knows (1967), in which James Mason narrates with a kind of helpess snootiness at the change going on around him, not quite sure what to make of it. In the imagistic sense, though, it’s difficult not to be taken in by the depth of the city’s beauty as seen in these films. A simple pan across the face of Westminster Palace has the simple power, for instance, to stir at once a romance for its history and an anger at the current ineptitude occurring daily within its walls.

At the usual £19.99, this is a typically and frustratingly overpriced release from the BFI, especially since the only “extras” included are simply more films, which could have easily been part of the main title menu. John Sweeney’s commissioned score resists the histrionics that often overwhelm silent releases, though, and any lack of audio-visual commentary is compensated by the accompanying booklet – which includes an introduction from the BFI National Archive’s silent curator, Bryony Dixon, and essays by Iain Sinclair, Jude Rogers and Sukhdev Sandhu.