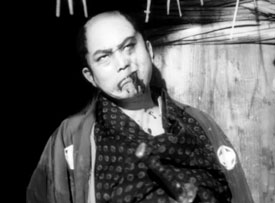 In his commentary, Jaspar Sharp states that ‘Tomu Uchida is gravely under seen in the UK’. Having only had a French DVD release some 10 years prior, he is right. Not only is he right but also it is a travesty that we have had to wait this long for his films to be seen. A group of characters from Samurai Sakawa Kojūrō, a kind man with a temper after a drink. Genta his servant and Genpachi his spear carrier. They are followed on the road by orphaned boy Jiro, Tōzaburō a man with a suspicious amount of money on him and a travelling musician and her children. They journey to Edo, some for a better future and others to honour the past. 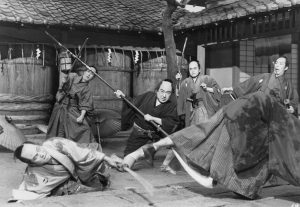 Akira Kurosawa and Yasujiro Ozu were fans. They were fans of Uchida. Ozu even worked on this film. This is surely an indication of just how great a film maker we have here. I can only say that having seen this, with its contemplative and constrained storytelling, I was very impressed. Visually it is told with a knack for drama and emotion. Narrative meanders slightly but does so to underscore action and inaction. Comedy, tragedy, jidaigeki motifs seemingly live as close bed fellows and make for a rich film. 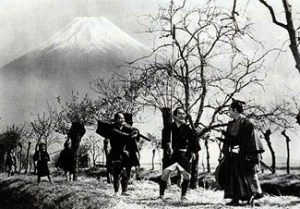 Having never seen this before I can only say that some print damage surfaces, however it looked great projected. Sharp has outdone other exceptional commentaries here. Loads of links, bios, tid bits. Sharp defines what a great film historian is. He not only rolls out film makers and creative forces but how a film mattered at its place in time. Why a film matters now. Why we want to watch it but more importantly, what we get from finding these great unknowns…