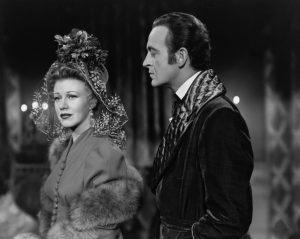 Within a historical epic we expect detritus. Within this film we have none of the epic but mass amounts of name dropping. First lady Dolley Payne Madison is one of five American first ladies at the height of public idolisation. He life began in Virginia and the aftermath of the revolutionary war. A war she saw first-hand, even helping remove the British. This forced an end of their American occupation and a free America. We navigate her life as a landlady in Washington. Due to necessity and harsh reality this becomes her life until a chance meeting. Skirting along her famed stand at the Battle of Bladensburg, to the lady between two powerhouses of American politics with each viable option. 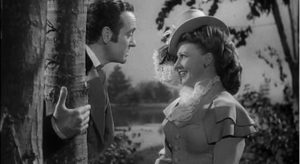 In Magnificent Doll, we have a serviceable film masquerading as a weighty biopic. Why do I say this? Well let’s see. Frank Borzage was a multiple Oscar winner. At this point in his career he was a workhorse director. 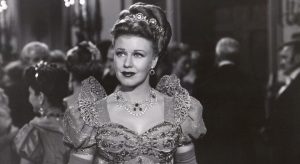 A director that could helm any film and make a very worthwhile product. he manages a functional biopic. This explains his choice. It has Ginger Rodgers as Ginger. Big personality, blustering voice and sassy moves. This explains her choice. 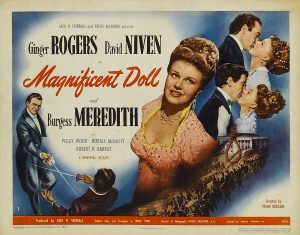 Side players like David Niven and Burgess Meredith both handle the range required. They are heavy character players. Here they play at studio requirements. They are characteristic motifs of the troupes needed to explore the story. Madison relationship with herself, men and ideas. They dont actually work completely in this process but they do keep you at least within a world.This movie is Gingers and you know it from the first frame.  Its not a negative but it is a weakness.