In these days of VOD and amazon where hundreds of thousands of films are available at the click of a mouse button, it’s easy to forget that there are vast numbers of films that are still widely unavailable. And when I think of all those classics that are just gathering dust in archives somewhere, it seems strange to me that these four would be the ones chosen for DVD re-release. That’s not to say that I didn’t enjoy a Sunday spent watching trashy cult action films, I’m just not entirely convinced that these particular films were worth the effort. 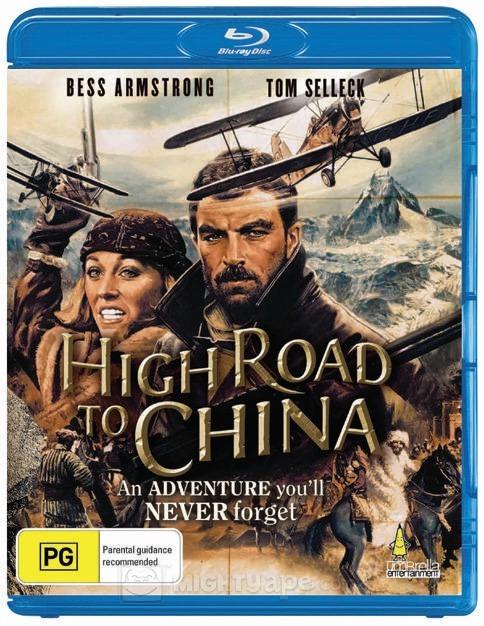 First up was High Road To China, a 1983 action-adventure/romance set the glamerous 20s. It’s a movie that clearly fits into the category of Raiders of the Lost Ark imitators – in fact, rumour has it that Tom Selleck was offered his role as O’Malley after having to turn down the part of Indy due to schedule clashes. In this case the protagonist is Evie Tozer (Bess Armstrong), a high-society heiress who hires retired alcoholic WW1 ace-pilot Patrick O’Malley to help her track down her missing father.

The problem is that while watching the film, all you’re thinking about is how much of a creative genius Spielberg is and how this film makes all the mistakes that he avoided. Aside from the obvious aesthetic inferiority, the clearly lesser set pieces, and the lack of attention to detail (you sort of end up ignoring the fact that they’re starting-up biplanes as though they’re cars), the important distinctions between this and Raiders are tonal and political.

Indy found himself a perfect enemy in the Nazis, a people with whom there’s no feasible redemption. They’re evil men who have committed atrocities, plain and simple.

High Road has no clear-cut enemy (which in itself makes the film less absorbing) and when Brain Blessed turns up as a malevolent khan sporting a turban, dark make-up and a scar, the film becomes problematic. There’s no denying that it’s a politically questionable portrayal, but it’s also an incredibly shallow characterisation. Really, the film needs a Belloq or a Toht.

There are a number of dubious choices that were made by the film-makers here; Selleck’s character bombing an Afghani village for instance. In the Indiana Jones films, the only people who get hurt or died are unequivocally evil. And the fact that all this going through my mind as I was watching betrays the films biggest flaw: it’s just kind of boring.

High Road may be a vaguely enjoyable romp for fans of the genre, but this film simply can’t help but live in the shadow of Speilberg’s masterpiece. 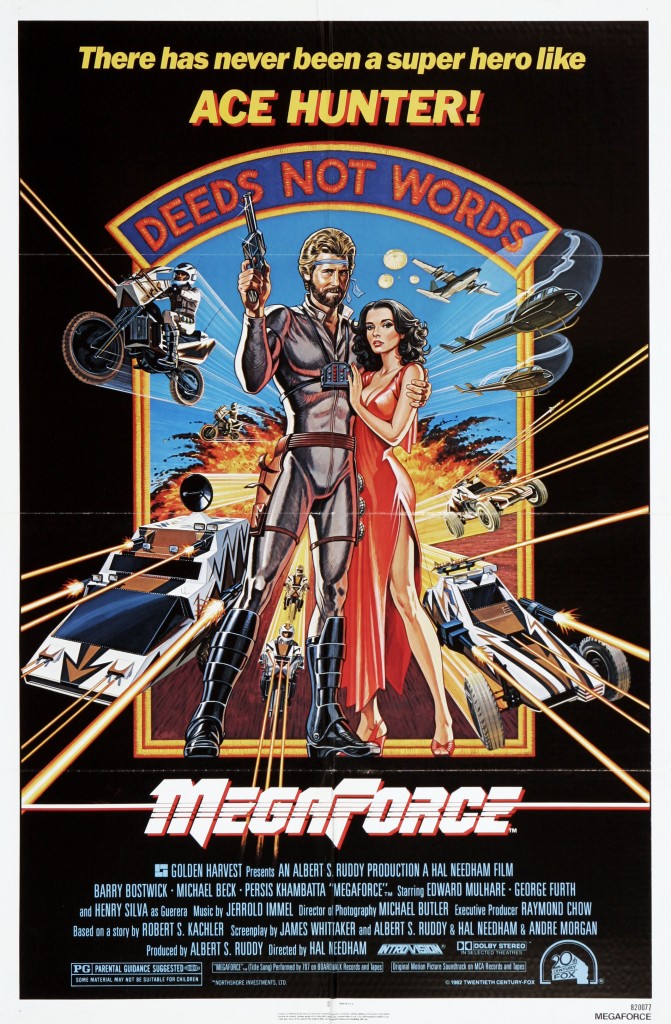 Megaforce (1982) also brings a film to mind – it’s dangerously close to being a live-action version of Team America: World Police. In this case, however, I feel that this actually improves one’s enjoyment of the movie.

Barry Bostwick stars as Ace Hunter, leader of the titular mercenary army who uphold peace equipped with the most advanced technology and weaponry known to man. Megaforce has all the right ingredients that give dated films like this a genuine kitsch appeal: ridiculous stock characters, tongue in cheek dialogue, plastic sets that wouldn’t look out of place in the original Thunderbirds series, massively gratuitous stunts, hair-dos, hilariously shite special effects, outrageous costumes/props, a meaty synth soundtrack, swarms of minions randomly pushing buttons, a cult cast (Michael Beck is best known was playing Swan in The Warriors) & c.

In the end there’s no real depth or value beyond any of this (the film was directed by former stuntsman Hal Needham and it shows), but that doesn’t matter. If you’re looking for a bit of 80s rubbish that revels in its naffness, look no further.

Robotrix (1991) could have be an interesting film (perhaps in the tradition of Blade Runner or Terminator) if it weren’t for its b-movie production value. Unfortunately it’s too interested in its cast of soft-porn stars and its status as Hong Kong’s first movie to feature full frontal nudity. 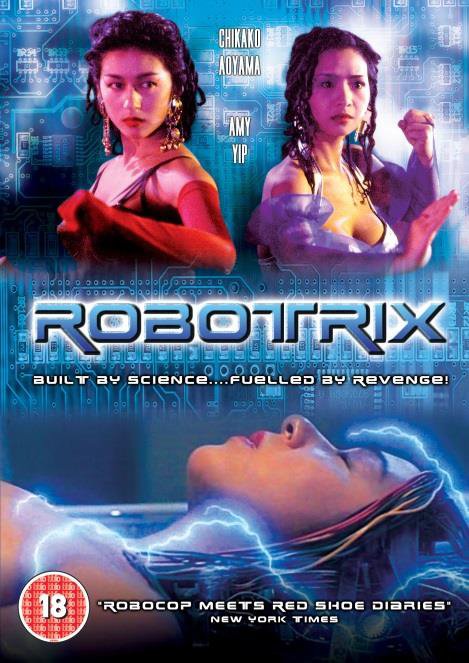 The story follows a policewoman who, whilst investigating a series of rapes and murders, is critically shot. But with the expert skills of one Dr Sara, her memories are transferred into a highly-advanced robot. She then re-joins the force, teaming up with another female android in order to defeat the megalomaniac scientist Sakamoto, who had also transferred his mind into a cyborg and who is intent on taking over the world.

This is real lowest common denominator entertainment. There are boobs and shoot-outs and boobs and fist fights and more boobs and… you get the idea. Occasionally there are glimmers of what could have been: one scene sees a man challenge an android to a fight in a bathroom. The symbolic value of this setting is wasted however and when the android later goes off to copulate with the man’s girlfriend, the scene is exploited for sex and violence, rather than used to explore any interesting ideas of man vs. machine, identity and A.I. & c & c.

Robotrix has neither has the philosophy nor the visual magnificence of Bladerunner, rather it eschews thought for unnecessary nudity and stodgy storytelling.

Luckily, I saved the best for last. Armour of God II: Operation Condor is the second in a series of films that follow a Hong Kong treasure Hunter played by Jackie Chan (whom the films are also written and directed by). 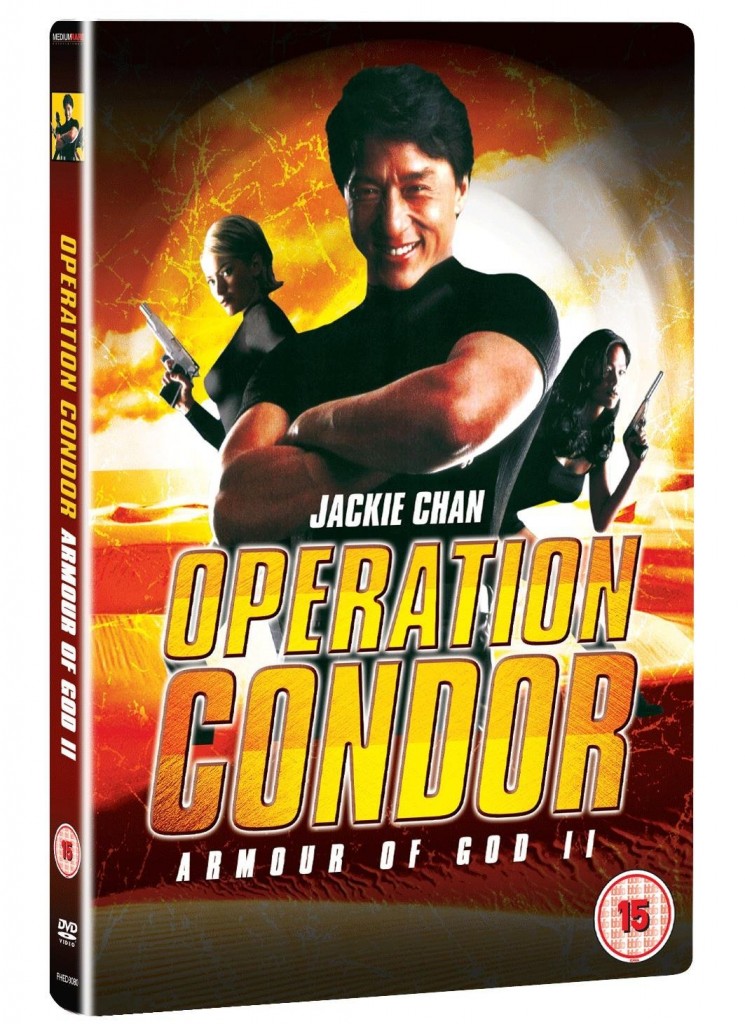 Jackie is summoned by Baron Bannon (Bozidar Smiljanic) to his mansion in Madrid where he is told the tale of a Nazi commander and his regiment burying 240 tons of gold at a secret base deep in the Sahara Desert. Bannon then tasks Jackie with locating the base and recovering the gold.

The film can accurately be described as yet another Indiana Jones imitator, but that doesn’t really do it justice. Jackie Chan is an actor who has that rare ability to be as physically compelling as Keaton or Chaplin. Indeed the scenes that prove most captivating are the prolonged action sequences where there is no dialogue whatsoever. I posit that Chan would have been considered an auteur had he worked in the silent era.

There is much fun to be had here, both intentionally (the still astonishing slapstick artistry that Chan weaves) and unintentionally (the now tacky incidental music). The plot is all nonsense, but strangely you really do end up caring about the characters, which I have to put down to Chan’s direction and charismatic screen presence.

Though not among his best films, there’s plenty of cartoonish action here and this re-release shows that Chan’s acrobatic stunts are as timeless as The Little Tramp’s antics.