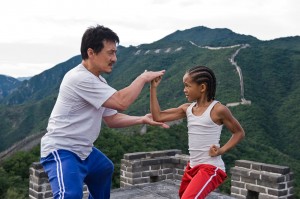 When 12 year old Dre (Smith) is uprooted from America to live in China, he hates every moment of it. One day, after being chased home from school by bullies, his apartment handyman Mr Han (Chan) comes to his rescue with his amazing Kung Fu skills and martial arts equipment. Dre persuades Mr Han to teach him Kung Fu, and together they prepare to go up against the bullies in an open level Kung Fu martial arts tournament. Presumably the original Karate Kid title was kept simply to draw in the crowds, but it does seem slightly idiotic considering there’s no actual Karate in the film.

Karate Kid is released on the same day as another 80s movie remake, The A-Team, but unfortunately where The A-Team updates its plot with light hearted fun and harmless action Karate Kid does not. Instead, it is long, repetitive and un-involving.

Jaden Smith is capable but uninspiring, an issue that is also not helped by a weak film script. Chan however is still up to scratch, and the impressive battle where he makes Dre’s bullies fight each other rather than fight him as he swings them around is probably the films best sequence. The famous ‘Wax on, Wax off’ scenes in the original is replaced by Mr Han teaching Dre to learn respect, by putting his ‘Jacket on, Jacket off’ a hook rather than leaving it strewn on the floor. 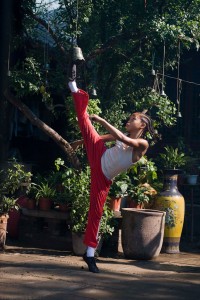 There are some scenes where the cast manage to pull of some moments of compassion and emotion, but overall the film is far too predictable and clichéd. The Kung Fu scenes are too long, and not very impressively choreographed, martial arts equipment is not particularly exciting. The most interesting parts of the film are the iconic images of China itself rather than anything that happens in the plot itself. The far too long runtime is the films main problem – it will bore young children quickly, as will the romantic sub plot about Dre and school friend Meiying (Wenwen Han) who befriends him. As a 90 minute film it could have worked, but at 2 hours 20, this is a film to be strenuously avoided.