Win a pair of tickets to Kirk Douglas season at BFI 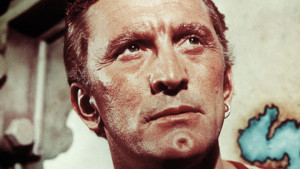 ‘I like to play that role. The rebel. The guy fighting against society. The champion!’
Kirk Douglas

Born Issur Danielovich into an immigrant family, he soon learned about poverty and hard work – not to mention ambition and determination, both crucial to his screen persona. Acting offered an escape, and Douglas obtained a scholarship to the American Academy of Dramatic Arts; after serving in the US Navy during the war, he worked in radio and theatre. He attracted attention with his very first film and soon became a major Hollywood star. His work is notable for its sharp intelligence, emotional intensity and robust physicality; unafraid of playing unpleasant characters – he has some glorious schemers to his name – he eschewed sentimentality, trusting in the viewer’s readiness to simply be affected by good acting. Moreover, Douglas never took himself too seriously; even in his darker roles, he seems to be enjoying himself. A champion, indeed!

Kirk Douglas season runs from September – October 2016 at BFI Southbank paying tribute to the legendary Hollywood star as he approaches his 100th birthday by screening his finest films.

Screenings include – A Letter to Three Wives, Ace in the Hole, Detective Story, Lust for Life, The Bad and the Beautiful, Paths of Glory, Spartacus, The Heroes of Telemark, Champion, The Big Sky and many more.

For more info, full listings and to buy tickets visit the BFI website

We have a pair of tickets to give away to a screening of your choice! (Subject to availability.)

In what year was Spartacus released?