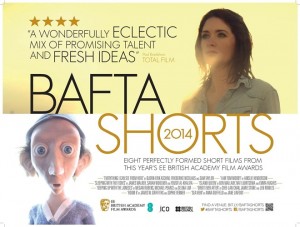 This year’s collection of BAFTA shorts include a visit to outer space, an other worldly imagination of prison and a tough look at your own reality and features a whole host of stars including Thomas Brodie-Sangster, Mackenzie Crook, Bronagh Gallagher, Maxine Peake and Tom Cullen.

Overall there is a real mixed bag here, but what shines through is the sense of adventure and excitement that each and every filmmaker aims to reach for with their short films. There are some real bright ideas from filmmakers, both live action and animation, who will quite rightly become the new stars of British cinema and it’s simply great to see such a selection of new and fresh talent from the nation.

Highlights in the collection include comedy drama Island Queen directed by Ben Mallaby. Following Mim, a woman who has lived on a little island her whole life. Mim one day decides that she needs to grow up and start living like an adult – so she decides to have a baby but she doesn’t necessarily need a man for it. Despite her close and blooming friendship with Danny, she had never saw him in a romantic way and decides to use a local sperm bank. When events twist and it turns out she may have accidentally used sperm from her own brother, her whole world gets turned upside down. Her reactions are genuinely funny and the pure shock of it all really grabs the attention of the audience. The chemistry between the two leads; Sam Pamphilon and Nat Luurtsema is really sweet and innocent, so when they embrace it is oh so fulfilling.

Also, Michael Pearce’s Keeping Up With The Joneses, which is an intelligent and gripping thriller starring the great Maxine Peake. The film, which recently won the Shorts TV Award for Best Thriller at LSFF 2014, is a small story with epic consequences. When an MP’s wife finds herself hostage one day by two hit men that her husband had double crossed, this causes her to question everything that she holds dear and the routine of her mundane life suddenly no longer seems worth it. This is a very intimate and touching drama about one woman’s struggle against what she truly believes to the correct and right; and when she realises that standing by her cheating husband is not the best thing for her, she changes things in ways that she could have never guessed.

Animation also appears throughout the collection and in particular, Sam Taylor and Bjorn Aschim’s Everything I Can See From Here is a clever story, which highlights what you can learn and understand about people from their actions. Two guys are playing football in a desolate wasteland, they don’t need to say anything to each other but how one hogs the ball over the other is enough to understand their characters. When he kicks the ball into outer space, they don’t bargain on a visit from an indescribable creature who simply just wants to play with them. Then comes a wonderful moment when one of the guys exhibits his skill without saying a word; he is setting the boundaries and the rules, but the alien is no longer interested and proves he is in control. The animation of this particular story was simply wonderful to admire, the dull colours seem to add inherently to the story and the landscape that was created is really interesting to explore.

Finally, the BAFTA short film winner of 2014 was James W Griffiths Room 8 featuring Weekend and Downton Abbey star Tom Cullen. When a prisoner is locked in a dank and dark cell, he never bargains on a way of escaping but when he opens a box in the middle of the room, he learns it may be easier than he thought. His mysterious and creepy cellmate seems nonchalant about the whole situation and probably knows more than he is letting on. When the prisoner opens the box, he sees that the ceiling of his cell open as well – with that he believes his escape is clear but on trying to get out, he finds himself part of a bigger, darker and more sinister trick. Griffiths has created an alienating and intense atmosphere in Room 8, where the audience can get lost just as much as the characters themselves.

Worth a watch, because surely enough some of these names will be spoken about in high regard in the coming years, the BAFTA shorts are a joy to watch and even if some are a little weaker, it’s simply wonderful to discover new talent.