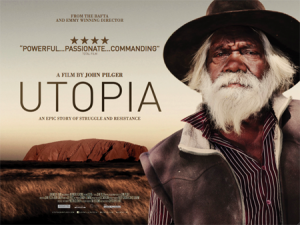 London-based journalist John Pilger‘s latest documentary, Utopia, returns him once again to his native Australia to investigate the continual mistreatment of the country’s indigenous population. Co-directed by Alan Lowery, the film is due to screen on ITV later this year following a UK theatrical stint, and is a convincingly powerful spark of an all-too-infrequently discussed issue.

This is familiar territory for Pilger. In 1985, he made The Secret Country: The First Australians Fight Back for ITV, which revealed the abject poverty in which Australia’s Aboriginal population continued to live as a result of actively racist governmental policies; he also published a book of his findings, A Secret Country, in 1989. As one sequence of archive footage is seamlessly dissolved into from a present-day image in Utopia, it becomes apparent that many of the injustices prevalent in 1980s Australia have not improved – and have, in many cases, worsened.

Utopia is divided roughly into four quarters. Beginning with the health ramifications of the Australian government’s legislated view of indigenous people as sub-human, Pilger and Lowery then trace the historically entrenched roots of racism (including a mixed-results vox-pop with average joes celebrating Australia Day), before looking at police brutality, the media’s role in racialising issues of child abuse and the assimilation techniques carried out by the government in order to prevent future generations of indigenous people reproducing.

Because all of these issues are interrelated, Pilger and Lowery can drift from one to the other without the need of chapter headings – though consequently, the 110-minute running time unfolds like an extended (if vital) news report. Dealing with the material conditions in which the Aboriginal population live in Utopia – a community named as such by the first British settlers, 200 miles from Alice Springs – the film shows the basic, human costs of systemic racism: devoid of infrastructure, without running water or electricity, blocked overflow toilets shared by many tens of people, all of which, we are told by a health worker, impact upon cross contamination of renal and coronary diseases as well as diabetes and gastroenteritis. Furthermore, glue ear delays the learning process of the young; more grisly, we hear of cockroaches being found in both children’s and adults’ ears as a result of poor sanitation.

In contrast to something like Michael Moore’s Bowling for Columbine, rather than build an essayistic case in order to then point fingers, Pilger treats every interview like a final showdown in itself. An early encounter with Warren Snowdown, Minister of Indigenous Health between 2009 and 2012, is particularly heated. Another, with a former Minister for Corrective Services, is grilled regarding her personal responsibility for the 2008 death of Ian Ward, who was essentially cooked alive while being transported 300 miles in the back of an unventilated prison van (the minister’s reply: “I certainly contemplated resignation…”)

This is incendiary stuff. As might be expected, the sequences dealing with police abuse are particularly damning – and deeply moving, when we talk with Arthur Murray (1942-2012), an Aboriginal cotton worker who organised successful demonstrations against living conditions and low wages, and whose 21-year-old son Eddie died of a smashed sternum while being held in police custody. (No prosecutions were brought forth.)

Utopia is an enlightening account of those governmental actions that continue to inform everyday life in a country that has been disgraced by the UN, among others, for continually failing to acknowledge its past atrocities and to integrate its indigenous people through legitimate and humane means. There are plenty of Australians in full agreement with Pilger’s cause – the journalists and social and health workers who appear in the film, for instance – and so the film arrives in timely fashion as another eye-opening thorn in the Australian government’s side. But the worry is that a television slot and a limited theatrical exposure won’t be enough. Tellingly, the most persuasively hard-hitting words spoken in Utopia aren’t those of the auto-cued appeal with which the film ends, but those of Dexter Daniels, a union organiser who helped spark the lengthy and landmark Gurindji Strike (1966-1975):

Reporter (with typically loaded question): “So you want to break the law?”
Daniels: “That’s right.”

The quiet, unflinching confidence of a man who knows his inalienable rights as a human cannot be matched.

‘Utopia’ is released in UK cinemas on 15 November 2013 and on DVD on 2 December 2013. A nationwide screening on Monday 18 November is followed by a live satellite Q&A with John Pilger: click here for more details.