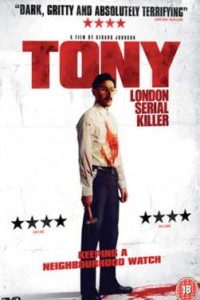 Tony is a very low budget British film that features some refreshingly spot on acting and an involving story line that doesn’t focus solely around drugs and gangsters which such low budget British films seem to need to guarantee a cinema release. The films full title is Tony: London Serial Killer and the plot revolves around a brilliant performance from unknown Peter Ferdinando. He is Tony: a lonely, and socially frustrated social misfit whose outdated charity shop clothes stand out even in the murky grim streets of East London. When Tony tries to interact with others he usually ends up brutally murdering them as we follow him and his trail of escalating victims.

However Tony is not simply a grimey crime drama – it’s much more of a social realist film akin to the films of Mike Leigh, and it’s not surprising the film was produced by an important figure in television social drama, Paul Abbott (creator and writer of series like Shameless). Tony has never had a job and lives in a depressingly bare council estate flat watching old action films on video all day long. Obviously lonely, when he does meet people outside on the street or in bars he lures them back to his flat and murders them in violent scenes (which are well done and not too graphic) . As he then props up their bodies on his sofa or bed it quickly becomes clear he simply is desperate for company and this is the only way he can feasibly see to go about getting it.

As the film focuses solely on Tony and his actions we really get to glimpse inside his confused mind and motivations, for example when he meets people the close ups and brilliant facial expressions from Ferdinando convey his thought process of whether or not he should kill them or let them go. A couple of the scenes don’t really fit (such as a neighbour coming to borrow a plaster from Tony) but the performances are all believable and for such a low budget the film is very well cast. There are also some nice moments of dark comedy and the soundtrack builds up tension well without becoming overbearing.

Tony is an interesting portrait of alienation and British society’s ignorance of its outcasts. At just over 70 minutes it could have followed more standard narratives and developed a little more but it works well as a shorter simple character observation on Tony rather than veering of for a wider context of a back story of what led him to be in this state. Tony was released in cinemas on Friday but if it’s not showing anywhere near you its also been released simultaneously on DVD – order it here. Trailer is below.