The Hobbit Battle of the Five Armies Review
Home
Reviews

The Hobbit Battle of the Five Armies Review 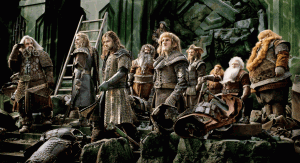 The Hobbit Trilogy has finally come to an end and, even though I’m not a fan of waiting years for the next installment, it’s a sad time. Perhaps because it is more a sextology than a trilogy and Tolkien’s world has come to a close. We’ll also never get to see Legolas execute ridiculous feats such as medieval fantasy parkour… or in this film, just accepting his crush’s love for a member of another species.

The Desolation of Smaug left us with the dragon Smaug flying towards Laketown intent on destruction, Gandalf strung up in a cage by a mysterious entity and the dwarves locked up in their ancestorial home, searching for the shiny heart of the mountain – the Arkenstone. The Battle of the Five Armies gets the pesky dragon out the way quite swiftly so as not to risk this film spawning too much Freeman/Cumberbatch fan fiction, sends some elves to rescue Gandalf aided by Saruman and it turns out that the Arkenstone might be a symbol of divinity but it also drives it’s owner mad with addiction so guess what Thorin ends up battling other than orcs. It’s all very exciting with the entitled battle knitting together the storylines with many graceful elves kicking orc butt and a few hundred ballsy dwarves headed up by Billy Connolly as Dain II Ironfoot (which is fabulous) headbutting orc butt from the back of butch pigs fresh from war camp.

If you’ve read the books, you’ll know there are deaths, but I won’t ruin it for those who haven’t, even if they really should for no other reason than to join us in the absurdity of the elf/dwarf love story that takes up as much of the film as the Hobbit does. I think I can understand why the writers put it in – what will us girls do for three hours if not pine over a romantically challenged dwarf. Ahem.

My only disappointment would be that which comes with any adaptation, some well loved scenes and moments are either completely forgotten or thrown away 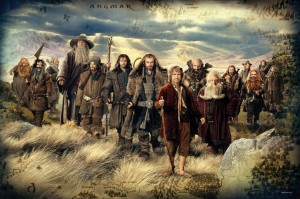 in a lacklustre fashion which awakens the dragon of discontent within fans, even if it’s in a glorious winter of Thorin, son of Thrain. The misty mountain of unsated appetites rears it’s ugly head… an appetite that come from waiting a year for a new installment with fingers crossed that our Wizards make it through the filming process. They prayed to not be disappointed like Ian McKellen was at the sight of his craft dwindled down to green clad companions and imaginary scenery.

Peter Jackson’s magnum opus is a beauty to behold even for those nay-sayers who find the concept of naming swords, ultimate evil and talking dragons as something difficult to relate to. The final Christmas that includes a Tolkien epic is upon us and it’s a visual Christmas pudding, full of spicy put downs and fruity whimsies and while intoxicating at times for the characters there is a discovery for treasure, symbolic or not, at it’s heart.

Unfortunately, it’s a dangerous business going out your door. You step onto the road and if you don’t keep your feet, there’s no knowing where you might be swept off to. Thankfully Jackson takes us there and back again in beautiful style if not without it’s bumps.