The Hobbit: An Unexpected Journey Review 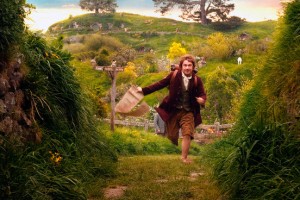 The Lord of the Rings is a cinematic experience like no other; it’s journey that spans three films, twelve hours and all the emotions. Epic in scope, featuring thrilling action sequences and memorable characters, they were a sensation because they were truly incredible pieces of cinema that transported you to a living, breathing Middle Earth. It was a bit of a risk at the time to make the films, as the weighty source material and highfalutin names and terms of Middle Earth may not have translated well onto film, but they turned out to be really, really good, and people paid for it. By Return of the King, Peter Jackson had earned the loyalty of viewers to the tune of $1 billion worldwide, and a shelf full of Oscars. Sadly, his return to Middle Earth feels a little too much as though he is trading in on the good faith of Rings‘ gigantic fanbase by stretching a rather slight story out over three films, and on the evidence of An Unexpected Journey, with very little narrative or creative reasons for doing so.

The first suspicious piece of storytelling emerges very early on, as old Bilbo begins to relate the story to Frodo, as a hamfisted way of tying it into the original trilogy. It feels incredibly forced, with Elijah Wood noticeably uncomfortable reprising his old role, and a meandering pace which allows for pointless stories when really the plot desperately needs to get going. It smacks of filler, padding out the book’s slender story into something that can fill a whole trilogy. This is not nearly so bad as a scene in the middle of the film with Saruman, Gandalf, Elrond and Galadriel discussing the mission and generally being rather ethereal, or a rather jarring diversion with newcomer Radagast The Brown (Sylvester McCoy), both of which drag the film to a near halt. This isn’t always a bad thing, as fans of the Extended Editions of Rings are quite content to watch hours of filler. It’s just that there’s so little to everything else in the film that the added content feels even more superfluous.

By stretching the source material over three films, the script loses much of the richness of Tolkein’s writing that permeated the Rings trilogy. Instead of the singsong lyricism of Tolkein’s prose, there is a script made up of poor slapstick and what seems like Middle Earth fanfiction. The problem mostly lies with the too many dwarves spoiling the hobbity broth. Fifteen main characters may have worked fine in the book, but in the film only three or four of the merry band of dwarves are given anything approaching a character, so that the scenes of them all having fun together, or being in peril together, altogether lose their impact because, well, we don’t know or care who is who. The vague attempts at making them a jolly bunch to be around generally ends up as misguided comedy, leaving their scenes feeling irredeemably flat. They are all well cast, and the designs to make them stand out from each other largely work well, but they have so little to do that their number could be halved and no one would notice. Gone is the natural banter of the Fellowship, replaced instead with something altogether more forced and unfunny.

Crucially, there just isn’t enough threat to make this feel anything like a real adventure. The villains – The Goblin King and a really big orc – feel a little lacklustre and token. The former is deliberately grotesque and over the top; he’s a morbidly obese, wart-ridden monster with a love of power and a personal zipline goblin to send messages around. But he’s so obviously over the top that the whole underground escapade begins to feel more high-camp than terrifying or even mildly perilous. He’s certainly no Balrog, and the really big orc feels like a pale shadow of Lurtz, the Uruk Hai from the first film. If it seems unfair to continually compare The Hobbit to Lord of the Rings, Peter Jackson is the first to do so, even having the gall to face the Goblin King off against Gandalf on a bridge, just as he did with the fire demon. By constantly referencing and linking to the first trilogy, Jackson only serves to highlight the inadequacy of this one. To further reduce any kind of threat, the film ends with one of Tolkein’s favourite deus ex machinas, which, although faithful to the book, on film feel like a massive cop out from what was shaping up to be an excellent action sequence. 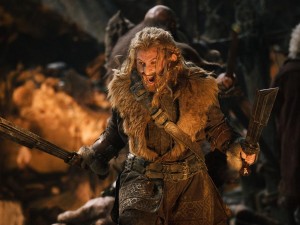 When the story struggles this much, commenting on the technology seems a little moot. However, seeing as everyone who has been following the progress of the film has heard about Jackson’s big experiment – 48 frames per second, or HFR (high frame rate) as it may well be sold to you – it should be noted that the look of the film is totally jarring and un-cinematic. Everything looks and feels fake, the action sequences occasionally look like computer games or cartoons, and the 3D makes it all come across as one big, ugly gimmick. The worst crime of all is that Hobbiton, previously so warm and homey, now looks like a primary coloured set, or one of those open air museums that clearly no one lives in. Perhaps those who watch An Unexpected Journey in traditional formats will enjoy it significantly more. For now, at least, HFR can not be counted as a success.

The film as a whole, however, does have some successes, and they are enough to make this film pleasantly watchable, even if it lacks the spirit of its predecessor. Martin Freeman fills the shoes of one of literature’s great heroes with an aplomb and a Britishness that centres the film and gives it a much needed heart. Some of the action sequences, meanwhile, are excellent, making good use of the giant cast to fill the screen with a manic energy as dwarves fly here and there, whether killing Goblins or dodging trolls. The real winner here, however, is Gollum. Andy Serkis excelled in the role from The Two Towers onwards, and he is a very welcome presence in this film. Because the ring has not yet been stolen from him, there is an innocence to this incarnation of Smeagol before the bitterness of the theft affects him. Yet he is still a fearsome, wily figure, and his scenes with Bilbo stand head and shoulders above the rest of the film. It is a crying shame that he will not be in the next two Hobbit instalments.

An Unexpected Journey is not a terrible film. In fact, with some rather inventive action sequences and the amazing riddles in the dark sequence, it’s not even a bad one. It’s just an often flat, danger free and adventureless adventure that ends up as a rather disappointing franchise entry. Bilbo’s final line in the film is “the worst is behind us.” With giant spiders, fire damage, a thrilling barrel escape and a truly epic battle still to come, let’s hope for the sake of this new trilogy that he is right.