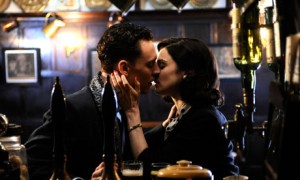 Besides an early aside involving an impossibly insensitive mother-in-law, there are few laughs in Terence Davies‘s adaptation of Terence Rattigan‘s 1952 play The Deep Blue Sea, a deeply felt, sobering film that begins with a woman’s failed suicide before tracing how she came to this predicament whilst also observing its aftermath.

Rachel Weisz plays Hester Collyer, wife of judge Sir William (Simon Russell Beale) in the years following the second world war. The latter’s social status elevated him above military service during the war, and Hester loves him endearingly if joylessly before meeting Freddie Paige (Tom Hiddleston), the ex-RAF pilot whose comparative youth breathes new life into her. In the film’s opening sequence, we fade in and out of images of Hester as she prepares her suicide, remembering in the process the joys of her affair with Freddie.

Set to Barber’s Violin Concerto, it’s a melancholic sequence that perfectly asserts both Hester’s immediate drowsiness and the overall nostalgia with which Davies as a director has become affiliated. Indeed, as another of its director’s post-war period pieces, it can be and has been reviewed as only the latest of the auteur’s return to childhood (he was seven when Rattigan’s play premiered).

The social constraints affecting the central triangle of Sir William, Hester and Freddie tell us early on that things won’t work out well. The film foregrounds lengthy, emotionalised exchanges against a subtle backdrop: the aftermath of the world’s second imperialist war, in which, for instance, Freddie’s lingering belief, that he was placed at the front line so that others such as the Collyers might live in a privilege far removed from the battlefield, is undercut by a haunting sequence in Aldwych Underground, in which Hester and Sir William sing with others over the sounds of air raids and bombing above.

The implication is that the destructive territorialism carried out by the world’s advanced states is merely an extension of a domestic policy – capitalism itself – one that makes victims of everyone, of emotionalism, snobbery, neurosis, want, lust, and so on. Put another way, the gross economic inequality fundamental to Britain determines the multiple, recurrent notion of “the grass is always greener”. As such, the three main characters feel at various moments very real indeed, and are acted with such vivid authenticity by Hiddleston, Beale and Weisz.

For Hiddleston, the film concludes a year that began with his outstanding turn in Archipelago, while Beale showcases with remarkable subtlety why many consider him the finest theatrical talent of his generation. Some might question the decision to cast Weisz as Hester, but she’s an apt choice even if her character seems strangely underwritten, given the narrative’s focus on her: Weisz betrays great vulnerability in the enigmatic role – that pub scene in which she tries to sing along with Freddie demonstrates very well how besotted Hester is with him. 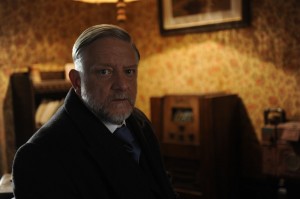 There’s a sense early on that Davies’s script is going to make things too easy, dramatically, for us to side with Hester in seeing Freddie’s appeal over her cumbersome, father-like spouse – Barbara Jefford‘s turn as Sir William’s mother-from-hell is the most evident example. But things thankfully even out; a scene in which Sir William visits Hester at her home following her suicide attempt is particularly poignant – you get a sense of real emotional regret from Beale’s magnificent performance.

For all its detail and control, though – even its nuances, and there are many of them – the film still seems too detaching in its aestheticised qualities. Eschewing master shots and exteriors in general, Davies opts for a production design that looks and feels like a self-conscious period piece, removed from the real thing. Nothing wrong with that in particular – it’s obviously quite deliberate, and probably determined by budgetary constraints too (the film cost £2.5 million) – but it can often make it difficult to “engage” with the hermetic world.

The Deep Blue Sea‘s biggest weakness, besides from that unwarranted smile from Hester in the film’s final shot – too much a stretch, given its preceding moments – isn’t so much the strangely distancing effect of the aesthetic, but the lingering aftertaste that we’re no nearer to understanding Hester as a character. Deeply wounded by the film’s end, her capacity for instinctive emotional risks and to hurt and to be hurt comes off in the film as something of a truth, but it’s open to debate whether she ought to remain a cipher in the way that she does.

Still, this – the London Film Festival’s closing gala – is an impressive film from one of Britain’s most acclaimed and serious filmmakers.

Parts of this review were originally posted by the author here.