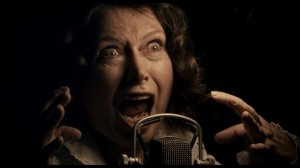 Something wonderful happens in cinema, something that really can only happen when you are sitting in a darkened room surrounded by your peers, sitting in front of a larger than life screen filled with dazzling colours and magnificent sounds – something you really cannot experience sitting in your front living room. This experience cannot happen with television, where you can dip in and out, where advertising can break the narrative flow and where repetition is a standard form of inclusion – no, instead cinema can take you away from your seat and place you (albeit for only two hours) in a world sometimes alike, and often unlike our own. So turn off your mobile phone, forget the world outside and allow yourself to be wherever the director wants to take you.

In the case of Berberian Sound Studio, director, Peter Strickland wants to place you into a 1970’s Italian post production sound studio, and really, how many of us will know what that feels like? Once, every so often, a film will be made which makes an important point about the medium, why this medium should hold such an importance and how it differs from the rest. David Lynch’s Mulholland Dr. was one of these films in my opinion, Pulp Fiction was another, many would argue as recent as last years The Artist, make important points about the ways in which different elements of the cinema can be used to create other worlds, create believable (and sometimes not) verisimilitudes that are made to engulf an audience. Berberian Sound Studio is in homage to film sound, almost the opposite to the The Artist, in the ways in which it so heavily relies on the sound (both diegetic and non) and Strickland really knows how to play with and alienate the audience through the sound.

Berberian Sound Studio follows Gilderoy (played by the performance of the year, in my opinion, Toby Jones), a quiet sound engineer from Dorking who is hired to help out in the post production dubbing and sound mixing of an Italian horror film, The Equestrian Vortex. The director, Santini (Antonio Mancino) is making a film wholly based upon the ‘giallo’ horror of traditional Italian cinema, which follows a group of students who are haunted by witches and a “dangerously aroused goblin”. As Robbie Collin points out, stylistically, Berberian Sound Studio has almost nothing in common with giallo, but fans of Lucio Fulci, Dario Argento, Mario Bava et al will nevertheless have a field day. 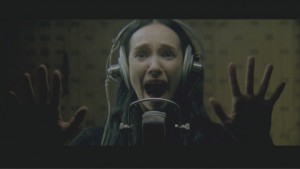 What Gilderoy doesn’t imagine encountering is the nightmarish vision, which follows his arrival at the studio. In reality, he is surrounded by a hot headed producer, Francesco (Cosimo Fusco) and an uninterested receptionist (new Bond girl, Tonia Sotiropoulou) but as time and realities shift, Gilderoy finds himself lost in an otherworldly spiral of sonic and personal mayhem.

So on paper, that is Berberian, but I don’t expect most people to fully understand what the film is about having read my ramblings (or in my case, the press notes), but many people have come away saying they do not understand the film fully having watched it. To them I say, don’t try to understand it. I was once given a piece of advice when watching the cinema of David Lynch, it may or may not make sense with what came before or after, but believe every single scene you are watching as they come along. This piece of advice, I believe, rings true with this film. Much of Berberian left me comparing the film to Mulholland Dr., the ways in which it seems to be following a certain narrative strand and then suddenly your concept of reality is contorted in ways one could never imagine (apparently so). Furthermore, the narrative technique of Strickland’s use of the sign ‘Silenzio’ flashing neon red throughout the film recalls the stunning Club Silencio of Lynch. 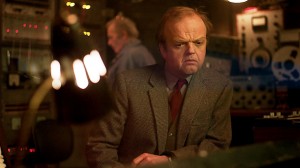 The sounds used in Berberian are some, which mark it as something far more special than the standard film. This film is an orgy of sensations, remarkable in the ways that it can illicit certain base reactions. Strickland connects a variety of innocent sounds, fruits being cut, drums being hit with the terrifying images of the horror film, within the film – images, which the audience never witness. We watch the film through the eyes of Gilderoy, and can only imagine what he is watching through his terror. To a certain extent Berberian, is a comment on our happiness to accept violence in the cinema, and that we never really contemplate whether we are being affected by them or simply immune to their potent influence (something Haneke was interested in with Funny Games). Watching a watermelon being cut in half has never been more affecting, especially when you know it’s a knife through someone. As well as this diegetic sound, much of the film is filled with a low hum, creating a sense of tension, which the audience doesn’t realise until later in the film, when reality is seemingly slipping slowly away.

Further hats must be raised to two actors in this film, first the incredible Toby Jones. It has been a long time since I have seen an actor manage to completely alienate themselves from the audience and all the other characters in the film, falling into their own destroyed reality – it reminds me of Laura Dern in Inland Empire. A further mention should go to Fatma Mohamed, who plays Silvia (who is playing the first Teresa in Santini’s film), who managed to capture me completely whenever she was on screen. Silvia plays a game with Gilderoy throughout the film, she gains his trust and the results are devastating for the crew of the film. She contorts her face in ways that surely aren’t human, and yet embodied an inherent weakness in the human condition throughout the film as well.

As a whole, Berberian Sound Studio, is a pretty dark film, mainly set in two locations (the studio and Gilderoy’s flat) and this lack of colour furthers the tension of the film. Whenever Gilderoy is in his flat, we look in on him through the window and for much of the film, you feel as if he is being watched – but Strickland interestingly aligns the audience with the voyeur, the viewer rather than the viewed but the reasons for this make (a little) sense by the end of the film.

Certainly requiring multiple viewings, Berberian Sound Studio, was my favourite film of FrightFest for so many reasons; acting, script, narrative, cinematography – the whole package came together and it really paid off.