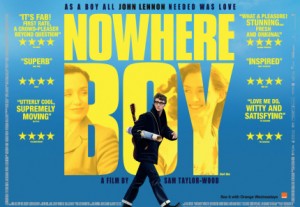 Lets be clear, Nowhere Boy is not a biopic. What it is, is an emotional drama, focusing on John Lennon’s teenage years and the triangular relationship between him, his mother Julia and his Aunt Mimi who cared for John from the age of 5. Since seeing the film I’ve again watched the trailer and it may mislead some audiences into thinking it is much more about the early Beatles and their music than it really is – in fact the word ‘Beatles’ isn’t spoken aloud even once during the film.

The film begins when John (Aaron Johnson) is a teenager. The sudden death of his uncle leads to a reunion with his mother Julia (Anne-Marie Duff) whom he has barely seen since she abandoned him (in circumstances that the film later delves into at its emotional climax). Governed by the strict rules of his aunt Mimi (Kristin Scott Thomas) at home, John escapes to clandestine meetings with Julia and it is through her that his passion for rock music develops.

Julia is obviously some sort of manic depressive, passionately dancing away one moment and in floods of tears refusing to answer the door to John the next. Duff captures this instability with just the right balance of normal and volatile behaviour whilst David Morrissey as her new husband has a small but apt comic turn. However it’s Scott Thomas who really steals the show, as a strict parental figure for John she is incredibly daunting but her emotional performance shows this is purely out of love for John. Meanwhile Johnson himself is fairly credible, combining Lennon’s infamous sarcasm with charm and charisma in both his mannerisms and musical performances.

Writer Matt Greenhalgh penned the well-regarded Ian Curtis biopic Control and thus is used to the music star context. The Nowhere Boy script effectively juxtaposes the emotional plot with a sufficient amount of jokes but the musical performances of Lennon and the quarrymen feel slightly dotted around the story and don’t quite gel. 1950’s Liverpool is recreated down to a tee, and this emotional teen focused story set within a period piece made me constantly compare the film to the recent film An Education. It seems that the British film industry is finding its latest successes in making dramas about youth, whether they be the youth of today in films like Fish Tank or of the past such as in these two films.

Sam Taylor Woods short film Love you More was nominated for the Palme d’Or at Cannes last year and at the Q and A after the screening she revealed that after this she basically had her pick of scripts. Many people will be surprised how mainstream a film she has chosen for her first feature, coming from a Turner Prize nominated artist. The film premiered at this years London Film Festival so comparisons will be drawn to another Turner Prize nominee (and winner) Steve Mcqueens whose Hunger also got a gale screening at last years LFF, but Hunger is a much more of an abstractive artists piece than this linear film which will have wide appeal.

Nowhere Boy is a film that will definitely aspire to get a cult status especially with die hard Beatles fans, but it will disappoint those who are looking for a film more determinedly about The Beatles and their music. Seen as a British film rather than a music biopic though, this is an enjoyable, humorous and surprising film. The only real let down is the occasionally sloppy Liverpool accents – and this can simply be put down to Taylor Woods inexperience. Nowhere Boy is out now in the UK and is a beautifully filmed and woven piece of storytelling that I heartily recommend.