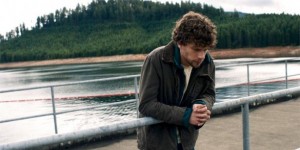 When early reports revealed that Kelly Reichardt’s latest film, Night Moves, saw the director entering thriller territory, one concern was that she would be shoehorned – by critics and programmers alike – into that strange critical position whereby her work is described and interpreted only in relation to its “re-envisioning of” or “unique take on” an established film genre.

This unwelcome shift – unwelcome because it places primary importance upon if and how an independent singular voice succeeds within familiar industrial parameters – has come quicker to Reichardt than it did David Cronenberg, for whom more recent films like A History of Violence (2005) and Eastern Promises (2007) had that genre appeal by which a true cinematic master is subsequently brought back down to earth by the critics for whom narrative and style are everything.

With Meek’s Cutoff (2010), Reichardt loaned her identifiable signature – understated performances, ambiguous ellipses, an apparent interest in how characters shape and are shaped by landscape – to the western. Now she’s made a thriller – and you seemingly can’t read anything about Night Moves without being made aware of this, as if the only conceptual appeal of the film suddenly becomes how its director may or may not reinvent certain tropes (and as critics, We Are The Experts). Subsequently, for many, the reputation of a filmmaker like Reichardt now lives or dies on how well she is able to fit into (or challenge) our preconceptions of a particular form.

But alternative approaches exist. Forget for a moment that this film is by the director of Old Joy (2006) and Wendy and Lucy (2008), and it suddenly becomes plausible and acceptable to discuss it without that burdensome baggage of “what its director has to say on or do with that Genre We Know So Well”. Because make no mistake, the argument about what does or does not work here overstates the film’s experimental nature: just accept it as a film (an oblique thriller, a minimalist drama, whatever you like) and get on with it.

Get on with it: radical environmentalists Josh (Jesse Eisenberg) and Dena (Dakota Fanning) drive across Oregon to meet the former’s old pal and ex-con Harmon (Peter Sarsgaard) in order to sail upriver and place explosives made from 500lbs of ammonium nitrate at the foot of a dam. Thereafter, the trio’s agreement to split ways and lay low is upset by news that a lone camper has drowned as a direct result of the explosion. In intermittent phone contact with Harmon, Josh voices his concern that Dena might be having more trouble than her male accomplices in accepting the death; but as suspicions rise around him, Josh’s own guilt begins to worsen.

Eco thriller? Try emo filler: Reichardt’s film is a tale of two halves – a strong first and a limp second, not because one befits thriller status more than the other but because one is compelling in dramatic terms and the other much less so, even if its mannered moodiness persists. Eisenberg is typically convincing as an obstinate and humourless brat – and then, without Fanning or Sarsgaard to play off in the second half, he drifts into irritatingly somnambulant mode, failing to register the interior churns of Josh as others around him begin to question just why he’s so rudely unresponsive to their routine chit-chat.

The film’s peak is that splendid, exceptionally tense sequence involving the central terrorist act itself, and the aftermath, in which the three drive along country lanes at night, sitting three-abreast and staring beyond the aft-facing car-mounted camera. We hear the explosion, and Sarsgaard manages a momentary smile, the other two too visibly nervous to manage much of anything. And then, the somehow-becalming delirium of police lights ahead (Christopher Blauvelt‘s cinematography is consistently beautiful)… Shirking the more compelling questions arising from this curious tale (co-scripted with Reichardt by regular collaborator Jon Raymond), however, the film disappointingly becomes a psychological study of its least interesting character. As if to acknowledge that her narrative might not be going anywhere, Reichardt has named her film after the boat in which the three protagonists drift upstream to the dam – in a beautifully judged interlude that’s likely to make you come back for a second viewing.