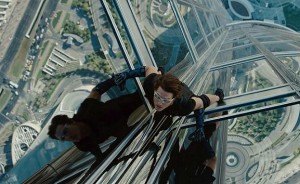 Within the first few shots of the latest Mission: Impossible film, IMF agent Trevor Hanaway (Josh Holloway) leaps off the roof of a building to evade two armed assailants pursuing him. The subsequent shot follows Hanaway in medium-close-up, back to the ground as he hurtles towards it, only for a device he dropped prior to jumping to inflate quick enough into an airbag large enough to absorb his impact. It’s an exhilarating moment that sets the tone and pace for the film as a whole. Through a combination of impressive stunt work, editorial precision and directorial invention (plus a funny script and funnier performances), this is top fun from start to finish.

Tom Cruise returns as Ethan Hunt, whose IMF team is implicated in the destruction of part of the Kremlin, after which it must thwart nuclear extremist Kurt Hendricks (Michael Nyqvist) and avert global catastrophe. Despite general positivity, common criticism of the film has been that Hendricks isn’t a good enough heel, even though his villainous cause is the most megalomaniacal of all – lifted, in fact, right from Bond.

The point that such criticisms seem to miss, I think, is that the emphasis here is less on who the IMF team is chasing than on the process and procedures by which it operates. This is, after all, “mission impossible”, and what this installment has going for it is a Maguffin story – scripted by Josh Applebaum and André Nemec – that sees its team reduced to its practical bare bones, with failing equipment and redundant technology countered by a team drawing on its own individual strengths: mental knack, physical guts and the will to improvise to get the job done.

In this way, the film becomes a self-reflexive showpiece for an anything-goes spectacle, in which Tom Cruise climbs Dubai’s Burj Khalifa, the world’s tallest building, with only one working suction glove, before having to make use of a fire hose to swing back into his own suite many floors below. It’s a beautifully constructed set-piece that flows directly into a ridiculous car chase that culminates in a kind of “how’s he still alive?” exasperation.

But by this point, Cruise and director Brad Bird have arguably earned this sort of tongue-in-cheek ludicrousness. The film’s earliest set-piece of length sees Hunt break out of a Russian prison with help of fellow IMF agent Benji (Simon Pegg), whose impossibly reliable computer skills are offset by Pegg’s strength at appearing out of his depth whatever the occasion.

Shortly after, Hunt and Benji are infiltrating the Kremlin by means of facial trickery and an illusory, perfectly replicated corridor. It doesn’t seem too long before Hunt is escaping from police custody by fashioning a hook out of his belt to glide down a power line onto a passing truck. His quick thinking likewise assists him out of another fine scrape, when he and IMF analyst William Brandt (Jeremy Renner) are shot at with innumerable machine guns whilst trying to swim from a sunken car… To the credit of all involved, such scenarios are all better seen than described.

Prior to this film, Bird’s CV boasted the animated delights of The Incredibles (2004) and Ratatouille (2007), in which he demonstrated a fine sense for action. Ghost Protocol is Bird’s first live-action film, and the lack of spatial inhibition inherited from animation’s possibilities is clear throughout. The film shows how far visual clarity and spatial cohesion go in making otherwise implausible action exciting. (I’m curious to investigate what critics who point to a weak villain and ridiculous set-pieces made of Inception, whose director lacks Bird’s talent for presenting intricate visual ideas in effortless and breathtaking fashion.)

After the stakes are raised and the evasive baddie somehow lives to see another country, the IMF team fly to Mumbai, where Hunt gets to drive a flashy BMW while agent Jane Carter (Paula Patton) seduces a local richman (Anil Kapoor) as part of an elaborate plan to save the world. The climactic showdown involves a futuristic parking garage with multiple and ever-changing levels; the editing is exemplary, and the tit-for-tat exchange of blows between Hunt and Hendricks is like something fresh out of Pixar. In its energy and invention, it recalls the bedroom door chase sequence of Monsters, Inc. (2001).

This review was originally posted here.