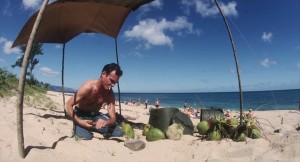 Having previously enjoyed comparisons to Robert Altman and Martin Scorsese, Paul Thomas Anderson confirmed with There Will Be Blood (2007) that his vision reached beyond respectful pastiche, and that he was perhaps the most fitting candidate to spearhead something resembling a renaissance in US cinema – one which harked back to its ambitious experimentalism of the 1970s – with strong backup from the Coen brothers’ No Country For Old Men and Andrew Dominik’s The Assassination of Jesse James by the Coward Robert Ford; all three films were driven by brooding men of the strong, silent type, and pointed to an aesthetic that sketched its characters against a profoundly American landscape.

With The Master, Anderson paints an intimate epic in similar vein to his previous film: a historical picture as detailed in its period evocations as it is elusive in its editorial slippages, it features two memorable contributions from performers in peculiar roles and boasts a directorial confidence that dares to take us to a world whose otherness is all the stranger for seeming so familiar. To be sure, like his film or not, Anderson gives the impression that he agrees with the critics who’ve gone so far as to claim he’s contributing something significant to the world: confidence in one’s own artistry is often enthralling in itself, and this is filmmaking well aware of its own majestic turns. Like Jonny Greenwood’s musical score, Anderson’s direction is off-kilter and self-attending, infusing scenes with a dramatic charge that invites us to interpret this curious tale as something of high importance. Indeed, some have claimed Anderson is now chronicling America and its history; it doesn’t matter that it’s taken him nearly twice as many features to draw such praise as Kelly Reichardt, to whom the observation is equally applicable.

By way of an extended prologue, The Master introduces us to disillusioned drunkard Freddie Quell (Joaquin Phoenix) toward the end of the Second World War. A seaman, Freddie discusses how to get rid of crabs (of the venereal sort) with his fellow officers, fucks a woman they’ve made of sand, and masturbates by the shoreline. In the immediate aftermath of the war’s end, he undergoes treatment for post-traumatic stress: he interprets three different Rorschach blots as “a pussy”, “a cock entering a pussy”, and “an upside-down cock”. Crying, he tells his examiner that his tears have been brought on by memories of his childhood sweetheart.

Soon after, as a department store photographer, he gets into a physical confrontation with a customer; elsewhere, he may or may not poison an old man with a lethal cocktail he’s made, and is chased across untouched fields. Freddie boards a boat and, the next morning, meets its owner, Lancaster Dodd (Philip Seymour Hoffman), to whom the film’s title refers. Dodd takes to the young man as well as his homemade liquor; he promises to give Quell “a full reprieve from [his] naughtiness.” And so begins the film’s story proper: like Daniel Plainview’s in There Will Be Blood, its overall arc is a father/son tale, with Freddie made to depend upon Dodd when all the while it’s the latter who is the demanding adolescent.

Continuing his canny feel for the bloated, Anderson treats every scene like an overreaching set-piece destined for misunderstanding or dismissal; learning from history, critics are wary of letting another Michael Cimino go by, and have amply overcompensated with baffling wonderment that matches Quell and Dodd’s own confusions. As a result, while the film drifts from one badly scripted scene to the next, there’s a deep, arresting investment in performativity, and after its largely wordless opening (like There Will Be Blood’s), it becomes an actorly parade that showcases amusing turns from Phoenix and Hoffman, both of whom provide the film its mannerist sheen of historicity. Some have said the latter channels Orson Welles, but he could just as easily be an antecedent of David Brent, hosting and leading a wedding with the same kind of daft childishness as The Office’s sad bullshitter. When Hoffman/Dodd performs a sea shanty to a room full of people, the film assumes Freddie’s distorting point-of-view, and the women are all seen naked; one recalls here a spot-lit Tom Cruise in Magnolia, commanding his audience to “respect the cock! tame the cunt!”

One recalls Cruise for other reasons too, as a subscriber to Scientology, whose founder L. Ron Hubbard was the starting point for Hoffman’s Dodd and his in-film cult, “The Cause”. That’s not to say the film is an examination of Hubbard or Scientology, however, much less the social currents that informed or fostered them. Dodd’s cult, led as much by his Lady Macbeth Peggy (Amy Adams), might stand in for a general social malaise specific to the post-War West (though set largely in America, the film ends in London). We understand Quell is a disturbed individual, haunted perhaps by atrocities of war and an incestuous fling with an aunt, though he’s more keen on lamenting the loss of first love Doris (Madisen Beaty), even if flashbacks test the extent to which he was interested in her to begin with.

Like Quell, whose lasting interest is in photography, Anderson seems fascinated by portraiture, and makes a virtue throughout the film of sustained close-ups. Cinematographer Mihai Milaimare Jr. (who shot Coppola’s Youth Without Youth and Tetro) films on 65mm (good luck to UK readers who wish to see the film on 70mm outside of London), and lends a visceral edge to the shadowy contours of Phoenix’s gaunt face in particular. This visual tendency primes us in interpreting Anderson’s approach: presumably, his latest film is meant to be a “character study”. It’s a shame, then, that the writer-director fails to understand that psychologically compelling drama stems from social depth, and the film’s more panoramic moments stand out for being so preciously thin in number.

Like Dodd’s cleansing process, the film repeats its methods with self-convinced stubbornness (one character remarks of Dodd that he’s “making it up as he goes along”). The result is an uneven work that ranges from magisterial to incoherent. Repetition and self-conscious artistry are what we’ve come to expect from Paul Thomas Anderson, though: Magnolia and Punch-Drunk Love (2002) both achieved and sustained unique, grandiose energies that were both the point of and the threat to the films’ narrative momentum. But even if The Master continues certain threads, something seems alack intellectually, which is perhaps why its director is also enjoying comparisons these days to Kubrick. If Anderson’s weapon of choice continues to be a bludgeon, though, it’s all the more curious given that he’s become so limp-wristed.

‘The Master’ is released in cinemas today. This review was originally posted on 13 November 2012 at idFilm.