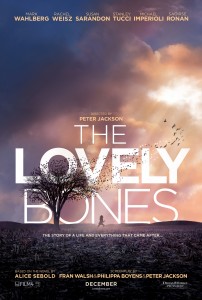 Never have I seen a release date change more times than for Peter Jackson’s adaptation of Alice Sebold’s bestselling novel The Lovely Bones, however 19 February is now so close it can’t possibly be extended any more. Set in small town America in 1973 the film revolves around young teen Susie (Ronan) who is brutally murdered by a close neighbour George Harvey (Tucci). After her death early on in the film the main focus shifts onto her family and how they deal with their grief whilst simultaneously following her murderer as he continues on with his life, not caught for his crime. However rather than being the extreme weepy this sounds like Susie herself narrates the film from an ‘in-between’ world she inhabits after her death in an unconventional twist as the film fluctuates between drama and fantasy genres.

The main problem with Lovely Bones is the slow pace of the film – it runs to more than 2 hours but the plot itself is actually quite concise and some of the scenes tend to drag out so at times this makes the film feel too predictable. However this is still a perfectly enjoyable film with some outstanding performances especially from relatively new face Saoirse Ronan. Its easy to see why Jackson has chosen this adaptation as his favour for fantastical sequences really come alive in the scenes when Susie is in the ‘in-between’ land. Full of vivid colours this landscape transforms and changes rapidly with Susie’s mood and thoughts and this fluidity is a great way to represent ideas of the afterlife on screen without challenging any audiences own preconceptions of what comes after death.

Wahlberg and Weisz as Susie’s struggling parents convey grief realistically and emotionally and the film doesn’t over dwell on their grief-stricken scenes as they are interjected with light comedy from Susan’s grandmother Lynn (Susan Sarandon) a raging alcoholic who is hilariously outspoken and headstrong. Tucci is the films only Oscar hope in the Supporting Actor category and he gives a spine-chilling performance as the sinister and lonely neighbour, almost managing to produce both hatred and sympathy for Mr Harvey from the audience. The Lovely Bones is a captivating story and with its surreal themes it would be hard for any director to adapt – Jackson has done a great job and the film is definitely worth watching its just a shame its not 30 minutes shorter. Watch The Lovely Bones Trailer