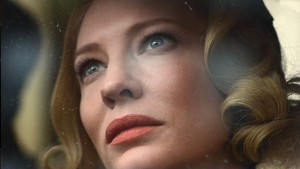 The nominations and awards are dutifully rolling in for Todd Haynes’ latest offering Carol. Set in early 50’s New York, Carol is a moving love story with a plethora of undertones. Cate Blanchett and Rooney Mara star as Carol and Therese, two women from very different backgrounds, years apart, but unquestionably attracted to one other. This masterful love story takes its time and offers us one of the best films not only of 2015 but also of recent decades.

Adapted by Phyllis Nagy, from Patricia Highsmith’s then controversial book The Price of Salt, Carol manages to mix the joy and pain of love, and the simple yet utterly complicated roller-coaster that is falling in love. The script does shy a little away from Highsmith’s story. Where The Price of Salt was a darker tale, filled with obsession, Carol is a more palatable story, however in no way a sub-standard one. Phyllis Nagy, with the help of Todd Haynes’ direction and exquisite cinematography from Edward Lachman, brings to life the core of The Price of Salt and letting the silences speak for themselves. 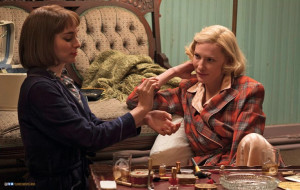 Carol is Todd Haynes’ third piece of work set in the fifties. Taking his inspiration from New York photography, art, and photojournalism of the time, Haynes and Lachman offer an absolute visual feast with Carol. Each shot is so intricately built, each look, each sigh from the lead actresses has meaning. Todd tops all this off by shooting in 16mm, helping give the cinematography a grainy, and colourless feel.

In Cate Blanchett, Haynes has the perfect Carol Aird: cold but loving, self-confident but troubled, stunning yet unaware. It seems every time Blanchett gives another tour-de-force performance, she is said to have been the perfect choice for the role she inhabits. Carol Aird is no different. Blanchett delivers such a poised and multi-layered performance it is impossible to take your eyes away from her. 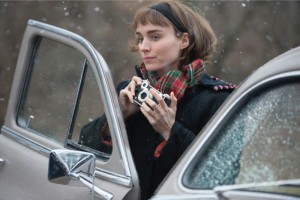 But it’s with Rooney Mara that Todd Haynes truly showcases his directorial talents and Mara’s acting skills. The character development of Therese Belivet is possibly one of the most subtle, yet powerful one in recent cinematic history. Because the weight of Carol, as a film, is in Mara’s point of view and her reactions to Blanchett, the casting of both of these actresses as leads is pure genius.

Carol’s success, as a piece of art, stems from the sheer brilliance of all involved. From the script to the set design, the acting to the cinematography, the music to the direction, but most importantly the determination of Phyllis Naig, Cate Blanchett, Tessa Ross and Christine Vachon who tirelessly continued to push for this film to be made. There truly is no shame in calling Todd Haynes’ Carol a masterpiece.