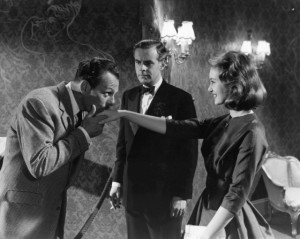 Laying on a bit arent we?

Henry Palfrey (Ian Carmichael) is the sort of person who has just about failed at everything. He cant get the girl, cant get the right car and cant even get on to the right teams at sports. He is in all honesty one of lifes losers. When he decides to spent a week at the school of lifemanship in Yeovil, everything changes. Under the tutorship of Mr Potter (Alastair Sim) (the schools founder and head), Henry is about to become one of lifes winners. Well after all the schools very motto is ‘if one man is up, the other is down.’ The often told quote to the students is simple.

Make the other person feel as if they are inferior to you. Make the feel that you have the upper hand.

Henry is taught how to win back the girl of his dreams April Smith (Janette Scott). Currently she is in the pull of the cad, Raymond Delauney (Terry Thomas). He has his eyes and hands on her after she started off with Henry! 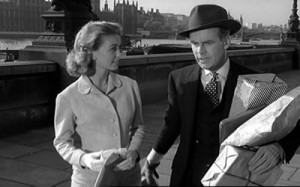 Whoops i did it again....ish

Taking this original film and watching it after viewing the two remakes is difficult. I have seen this before and more than once. The remakes however are their own works and as such need to be addressed. I saw the 2006 US Todd Phillips version recently and that was a different experience. It is a little crasser but also a little more connected with its story and how its narrative arch works. What that film wants to do is build up the loser but also to explore the relationships he has to develop in order to win the girl and thwart the foe. This is the first point, the original has good jokes like its US remake but suffers because inbetween these jokes, is little more than filler. The US film is always trying to get to that balance of laugh and cry or punchline and pathos. The use of comedy could be discribed as a tool to make you laugh not to relate to what is happening. Making for a film that is a switch on and leave in the background. You do not need to pay that much attention. If only maybe the love interest or the Tutor could fill this gap? 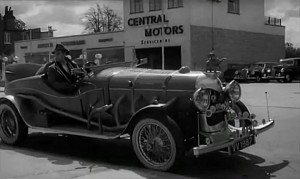 Its a crap mobile...

Well this leads us to the belter of a remake, Chhoti si Baat. Not seen it? Well you should watch it. This is a Hindi movie made in 1975 and is an almost direct version of SFS. However the focus is on the relationships between Tutor and Pupil. This works because the Tutor is given the room to play the role with humor. The humor is worked into a very clever and tight script but the relationship is fully developed. Sadly here the best asset, Alastair Sim, is not given enough time to breath and make the role his own. He was such a great personality that he stole a film. Here he still does but is lacking dimensions. Chhoti Si Baat builds this relationship, as well as the romance aspect. The romance is failed also in SFS. It treats it as a sideline to laughs. It is as if these are both indirect effects of a series of comedy sequences.I say this as it seems that both remakes worked out the failing of a good film that was a vehicle. The film had excellent constructive ideas but executed them with a focus in the wrong place.

Maybe it was that Hamer at this point in his life had become to dependent on drink. He was an excellent film maker but was also troubled. It could also be that the slightly strange comedy was a hard sell in a romance. The rom com was a long way off as a film genre or type. It would seem more to me that the film in the end suffered from being made to suit a national taste. Comedy in a vaudeville way. But then that was the nature of British comedy of the period.